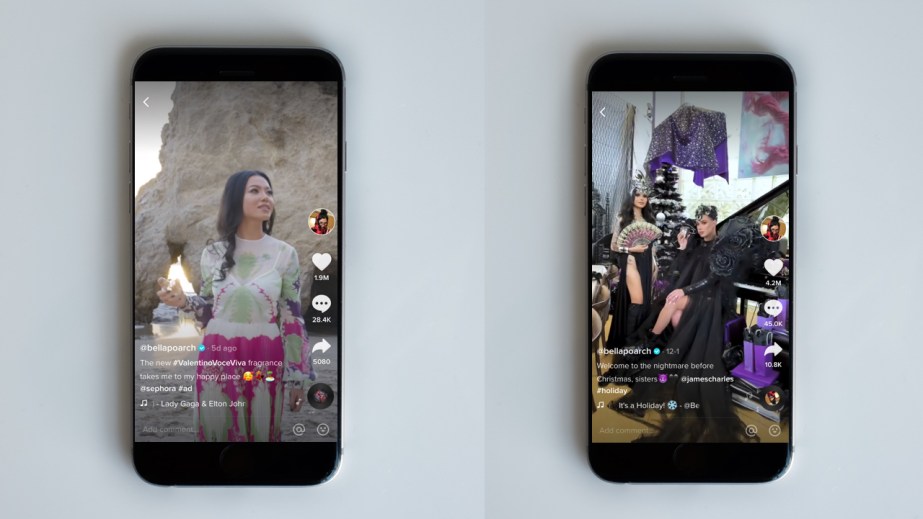 If you look at the list of the top TikTok videos of 2020, the No. 1 creation is not by Charli D’Amelio or Addison Rae — it’s by Bella Poarch.

After making her first TikTok video in April this year, Poarch has skyrocketed to fame with over 47 million followers. Her August lip-sync “M to the B” video was announced by TikTok on December 2 as the app’s top post of the year, based on total engagement. It received more than 535 million views and 43 million likes. She has now caught the attention of the beauty and fashion worlds, posting videos with James Charles, as well as promotions for Valentino, Eos and Moncler in the past three weeks.

“She’s had a pretty meteoric rise on TikTok,” said Soyoung Kang, CMO of Eos, which enlisted Poarch for a video campaign for its new lotion that was posted in late November. “What I personally love about her style is just how fresh and unique it is. What she’s doing is pretty mesmerizing.” Poarch’s look is inspired by her interest in anime. In a recent set of videos she did with James Charles, her caption describes it as a “Nightmare Before Christmas” aesthetic.

Poarch’s popular content includes lip-sync, dancing, singing and gaming videos. Her lip-sync videos using the “face zoom” effect helped propel her to fame on the app, kicking off multiple viral trends. Her Instagram bio notes that she is a Filipina and a U.S. Navy vet, although details about her life are sparse. She’s keeping a low profile so far; her representatives declined a request for an interview.

Her brand deals have multiplied in the past several weeks. The Eos campaign marked her third brand collaboration on TikTok and her first beauty partnership. Last weekend, she appeared in a TikTok ad campaign for Valentino’s Voce Viva fragrance that launched in September. Other participants included the face of the fragrance, Lady Gaga, as well as five other influencers including Chriselle Lim and Bryanboy. Poarch’s sponsored post also promoted the brand’s retail partner Sephora.

“It was our first-ever TikTok campaign that we ran for the brand, and it’s a relatively new platform for our division overall,” said Kristan Maurer, assistant vp for integrated communications for the L’Oréal designer fragrance portfolio. “We are trying to discover if we can engage with this younger audience.” The campaign hashtag has generated 19.2 million views on TikTok so far; Poarch’s video has earned 13.2 million of those.

“We feel really fortunate that she wanted to work with us,” said Kang, who noted that Eos looks for rising stars. The brand previously enlisted Charli D’Amelio for the first ad she did on the platform during the holiday season in 2019. Boosted with ad spending, Poarch’s Eos campaign video received 3.4 million likes and 24.2 million views.

Poarch’s Moncler and Valentino fragrance (she wore a dress by the designer house in the video) ads demonstrate her rise as both a beauty and fashion influencer. “We love to synergize with our fashion counterparts and make sure that it’s a 360[-degree] picture of the brand,” said Maurer.

Poarch has also been open about discussing mental health online. In a December 2 post across her social media profiles, she published a note saying that she had been “in a really dark place” before her TikTok career took off and shared details of her mental health struggles. “Overnight, my life changed because of an app someone told me to download,” she wrote.

“Her speaking on mental health issues [has shown] her strong voice,” and Valentino looks for influencers who “have something meaningful to say,” said Maurer.

Valentino’s TikTok campaign process is to “let the influencers have complete creative freedom,” said Maurer. “You want to make sure that your content is authentic to the influencer, more so than on any other social platform you’re working on. We let them decide and propose to us what they want their content to look like.”