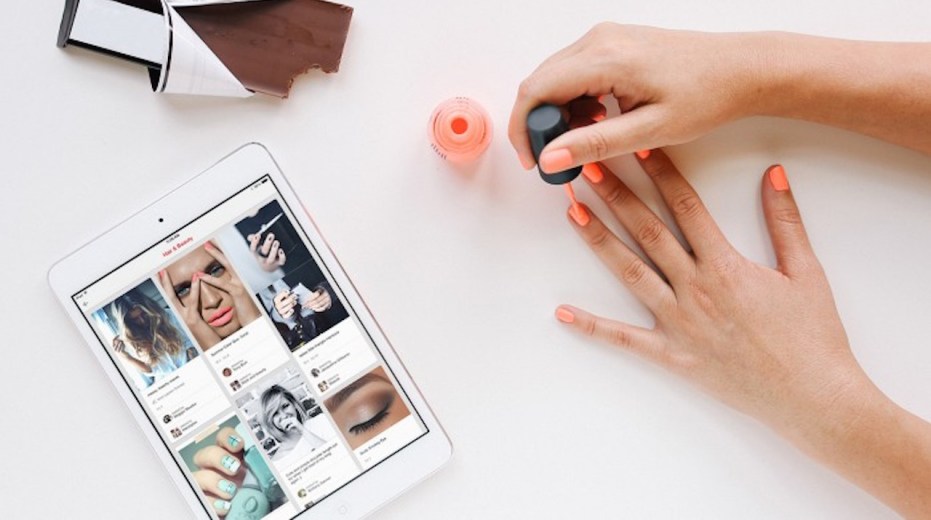 Beauty brands are ramping up their focus on Pinterest

Pinterest has experienced a surge in wellness, self-care and DIY beauty treatment searches, and brands are now evolving their activity on the platform.

It’s been over four weeks since salons and beauty services closed, and without professional help to maintain their beauty routines, customers are starting to figure out how to do treatments, like dying their hair, on their own. According to Pinterest data, searches for “self-care checklists” and “spa days at home” increased by 102% and 105%, respectively, between March 11 and March 24. There was also a 441% increase in searches for “temporary hair dye” globally, between March 9 and March 22.

Rachel Goodman, head of beauty partnerships at Pinterest, said 97% of searches on the platform are unbranded. That allows brands to play into inspirational and trend-driven content, such as seasonal looks, that might not get as much engagement on other platforms. “Topics that already existed on the platform, like recipes, self-care, skin care and hair care routines, are being engaged with even more so now because people need that [type of] inspiration so badly.”

At a time when brands — especially beauty businesses — like to state how community-driven they are, companies need to gravitate toward the platforms where their customers are already spending time. According to March study by Statista, over 32% of Pinterest users expect to increase their time on the website, which was already an average of 14 minutes, compared to 43% of Instagram users and 62% of Facebook users. Pinterest reaches 85% of women in the U.S. between 25 and 54 years-old. Now may be an opportune moment to spend on social platforms like Pinterest where costs are decreasing.

According to social media agency company Two Nil, digital advertising has taken a hit as brands pull back on marketing and advertising. Costs have decreased between 45% and 47% across the board for digital channels including YouTube, Facebook and Instagram; Pinterest itself has decreased its ad rates by 20-30%, even though engagement has hit an all-time high, according to Mark Zamuner, CEO of Two Nil. Independent social media strategist Selah Shepherd said that, even with cost-per-impression declining, Pinterest if giving brands a 200% return on ad spend, compared to 130% for Facebook.

Pinterest is essential to hair-care brand Aveda’s social presence, as it provides a window into customers’ dreams, inspirations and overall mood, said Barbara De Laere, Aveda svp and global general manager. The brand has been on Pinterest since 2013, but it only recently began increasing its activity on the platform, through organic posts. (It currently has no Pinterest advertising, even though it predominantly advertises on digital channels.) Previously its posts would focus on hair color and hairstyles, but since the emergence of coronavirus, posts have shifted towards self-care and wellness content, as well as simple hairstyles that its followers can replicate at home. Aveda has had to close its 6,000 U.S. salons as of March 16.

Aveda’s Pinterest posts fall into one of three themes: There are inspirational posts, which include ideas about color, hairstyles and information about Aveda services. The second is educational, which focuses on step-by-step product tutorials, like how to give yourself an acupressure massage. Education overlaps with the third theme, which is problem-solving. Problem-solving includes fixing specific issues such as overgrown bangs or visible roots. Typically, the three themes are covered equally — lately, however, the brand is creating more problem-solving pins to answer the growing need customers have due to salon closures, said De Laere.

The Aveda team has seen a double-digit increase in engagement across its sales channels over the last four weeks. Since the brand pivoted its strategy in mid-March, Pinterest pins have experienced a 10% increase in engagement. Meanwhile, on Instagram, the average engagement rate per post is up 27%. However, certain posts like at-home scalp massages perform better on Pinterest than on Instagram, said De Laere.

“Pinterest pins have a longer lifespan [than Instagram], so it’s not necessarily about the frequency of posting,” she said. “It is more about being very sensitive and very precise about the content.”

Pinterest is a unique platform in the social media landscape because it’s central use cases are not merely about sharing content, but also about saving it and using the ideas potentially at a later date. Pinterest users tend to be future-thinkers, said Goodman, and they use the platform to plan for specific events or moments. Therefore, pins tend to have a longer shelf life compared to an Instagram post, which explains why searches for “fun makeup looks” and “colorful eye makeup tutorial” increased by 200% and 93%, respectively, between March 11 and March 23. This is despite the overall decline in makeup sales.

Personal care brand Native is leaning into this concept that Pinterest is a platform built for planners. The brand has had a presence on Pinterest since 2017, through both unpaid posts and paid advertising. However, its focus and efforts on the platform were previously sporadic, said Marjorie Chelius, Native’s director of user acquisition. The brand is currently trying to fit its products and brands into the current cultural narrative of staying at home. According to multiple natural deodorant brands, there is a transition period the body goes through to adjust to them, which can take approximately 14 days. Native, therefore, added pins focused on social distancing and transitioning deodorant in March.

“Our renewed focus on Pinterest is due to a few external reasons: consumer growth on the platform and the strong global nature of the platform to reach our audiences abroad,” said Chelius. “While we’ve traditionally relied on static assets, we’re also now experimenting with video content to see if it serves our consumers better on this platform.”

The brand began increasing its advertising spend on the platform at the end of 2019, which will carry on throughout 2020, she said, but declined to provide specifics. Chelius said the focus is on new customer acquisition versus relying on Pinterest for retargeting or cross-selling.

Beauty brand L’Oréal Paris has been on Pinterest since 2015, and since mid-March, posting about hair color has been the brand’s top priority, said Maude Brunschwig, L’Oréal Paris svp of marketing and communications. The brand used to post once a month, but increased its cadence to up to five times a week. The posts have focused on educational tips and tricks, and also its Modiface virtual try-on feature, which has driven a significant increase to the brand’s website, said Brunschwig. She declined to elaborate.

According to Pinterest data, in a study of over 4,000 weekly Pinterest users, 86% made a purchase based on seeing a beauty or personal care pin from brands on Pinterest. Overall, L’Oréal Paris Pinterest pins have seen a 43% increase in engagement, said Brunschwig. L’Oréal Paris has advertised on Pinterest since 2015, and it has not increased its Pinterest advertising in 2020.

“Brands can have the ability to have a conversation with pinners during this time and be helpful,” said Goodman.