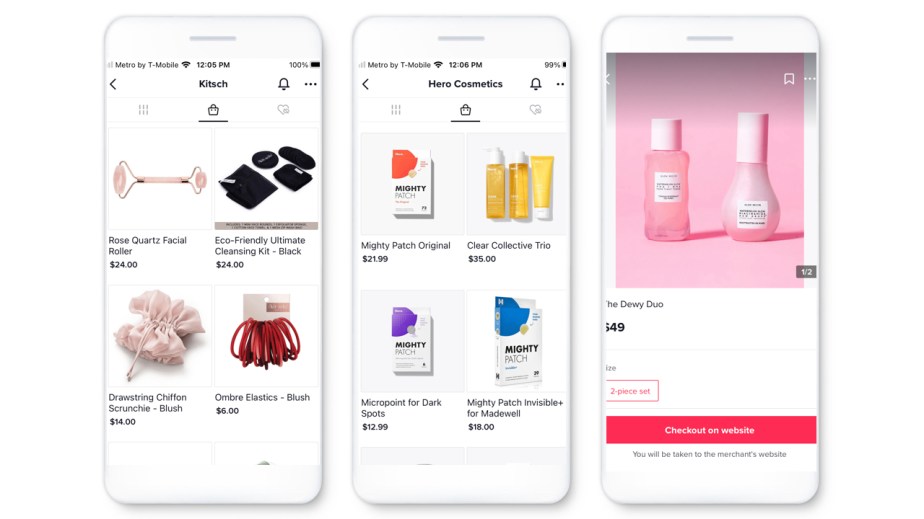 Time and time again, the viral TikTok effect has caused beauty product sales to skyrocket. So, it’s no surprise that brands are quickly signing on to TikTok’s new shoppable features.

As commerce surges across social platforms, TikTok is rolling out more shoppable options, and beauty brands are among the earliest adopters. Since testing of TikTok’s shopping feature began last spring, a wide range of mostly independent, digitally native beauty brands, such as Glow Recipe, Hero Cosmetics, Kitsch, Youth to the People, Rare Beauty, Summer Fridays and Item Beauty have introduced shopping tabs to their TikTok accounts. They are also gearing up to add the in-app checkout feature launched by TikTok last Tuesday in partnership with Shopify. Kylie Cosmetics was the first beauty brand adopter.

“We’re seeing increasing numbers of consumers using the shopping tab and anticipate more consumers will continue to adopt this in-app feature, as we test ways to integrate these shopping links into our content,” said Sarah Lee and Christine Chang, co-founders and co-CEOs of Glow Recipe, in a joint email statement.

TikTok reached out to Glow Recipe in April to be part of its beta shopping program. According to Glow Recipe, 90% of its e-commerce traffic from TikTok is from first-time customers. The brand was motivated to join based on the sales boost it has seen from its viral TikTok moment in March 2021. The brand saw a 600% spike in sales (an increase higher than what it saw for Black Friday) after its watermelon toner and highlighter were featured in a video by influencer Mikayla Nogueira (@mikaylanogueira, 7.4 million followers).

The role of influencers is crucial for driving sales spikes on TikTok. TikTok influencer Addison Rae’s Item Beauty is among the early adopters of the shopping tab, but shopping links are yet to be featured in TikTok posts by Rae or the brand.

“We believe social commerce represents the digital Main Street in the U.S. and beyond,” said Ritu Khanna, managing director of Shopify. “With the rise of the creator economy, creators are becoming the next generation of merchants and will increasingly look to their social channels for opportunities to sell.”

Hero Cosmetics added its shopping tab to its TikTok account on July 28 and is still considering whether to connect its Shopify account to the in-app checkout feature.

“Of particular interest to us is how this will benefit the end-user and how it delivers against our desired brand experience,” said Amy Calhoun, vp of marketing at Hero Cosmetics.

Since the start of the pandemic, U.S. social platforms including Instagram, Facebook, Snapchat, WhatsApp and Pinterest have amped up their shopping capabilities and functionality. They’re introducing shoppable links in posts, plus in-app shops with links to either DTC sites, retailers or in-app checkout.

According to Khana, social commerce is a “top priority” for Shopify. The online commerce platform has also inked deals with Facebook, Instagram, Pinterest and Snapchat to incorporate its commerce functionality on those platforms.

“With the pandemic, the center of gravity for retail shifted online,” said Khana, who noted that installs across Shopify’s social commerce channels increased by 76% from February 2020 to February 2021.

“We certainly have seen social shopping pick up” during the pandemic, said Calhoun, “particularly as people spend more time on social media and become more familiar with the different ways in which they can engage with brands and products.”

Kitsch, which launched its shop on TikTok in early August, plans to incorporate Shopify when it has the option.

The TikTok shopping pilot is currently available to U.S. and U.K. Shopify merchants, and Canada is set to follow in the coming weeks.

“We see the beauty category as one of the biggest opportunities for merchants, when it comes to social shopping on TikTok,” said Khana.