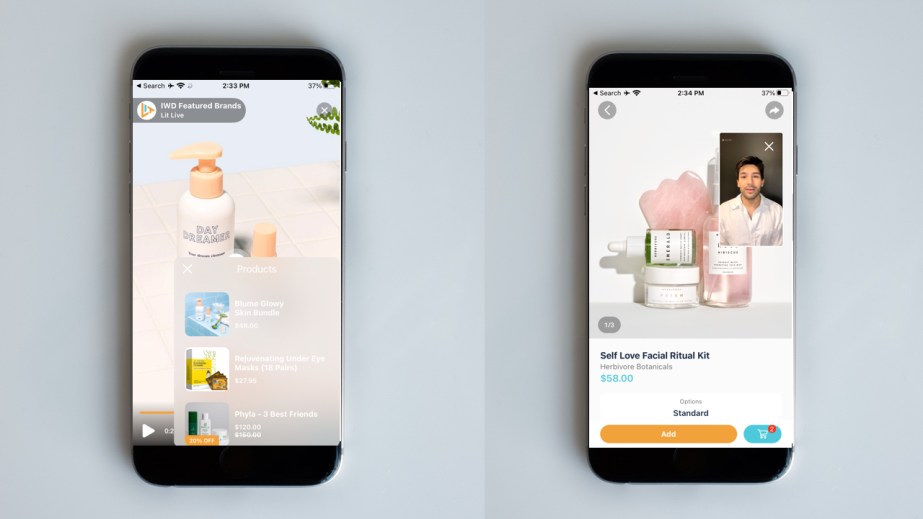 While shoppable livestreaming has emerged on major platforms including Instagram, Amazon, and most recently TikTok, beauty brands are also turning to livestream-focused startups for the format.

Beauty and personal care startup Blume launched a campaign on March 14 with Shop LIT Live, a livestream shopping platform launched in September 2020 by Toby Zhang, an early investor in TikTok. For the campaign, the brand is running a series of themed weekly livestreams for four weeks, offering 20% off to viewers and hosting a gift set giveaway. The partnership is just one of a growing number of brand-and-tech collaborations betting on the future of shoppable livestreaming in the U.S. Ulta Beauty, for instance, partnered with Perfect Corp. in November for its own in-app experience.

“What I think people like is a personal connection of who is presenting it and their thoughts on the product,” said Taran Ghatrora, founder and CEO of Blume. “It’s not necessarily a new way to shop, if you think about infomercials on TV. But it’s that personal connection of influencers that will make it more of an experience for people.” Shop LIT is one of several livestreaming platforms on Blume’s radar. It has also done promotions on beauty livestreaming platform Supergreat.

On Shop LIT, customers can browse through livestreams on a range of topics and purchase items via links that pop up during the stream. Checkout is done in-app with the ability to switch between different livestreams to add to cart or visit an existing cart with a video still playing.

For example, one beauty livestream recently featured influencer Dahmian Ramsammy discussing self-care and skin care, showcasing products by Herbivore, Malin+Goetz, The Ordinary and Fenty Skin. When products were demonstrated, they were highlighted on the screen, and users could scroll through products featured at other points in the video.

The platform also gamifies livestreaming by offering users coins that they can redeem as coupons for purchases in the app. Inviting friends to the app, following Shop LIT on Instagram or reviewing the app can earn coins.

“I’ve had this idea for a while, because we’ve been looking at what’s going on with livestream shopping in China for the last five years, since the initial birth of Taobao Live,” said Zhang. He created the company in March when the pandemic hit and is no stranger to the popularity of social media trends starting in China. He was an early VC investor in TikTok when it was Musical.ly, before it became a social media juggernaut in the U.S. after the acquisition and rebranding by Bytedance. Shop LIT operates its tech out of China, where it recruited talent from China’s myriad livestreaming platforms.

Brands sold through the app are either official partners that handle their own logistics, or they’re sold via an affiliate links program set up via Rakuten. Official brand partners on the app, in addition to Blume, include skin-care brand Seabedee, Baseblue Cosmetics and Masami.

“I see this as the new wave for online shopping,” said Peter Stadniuk, co-founder of Seabedee. The brand began hosting livestreams through an official brand account in early March and has seen a 10% conversion rate. “Everything is progressing toward video and livestreams. Also, people are getting tired of paying influencers and not having any ROI from it. You have static websites and pictures on Instagram, but that doesn’t give the product life or help sell it. I love the idea of someone real, an expert in the field, selling our product and answering questions for people right there on the spot while giving them a discount or deal to purchase,” he said.

While livestreaming has especially taken off during Covid-19, Zhang is betting on its long-term appeal.