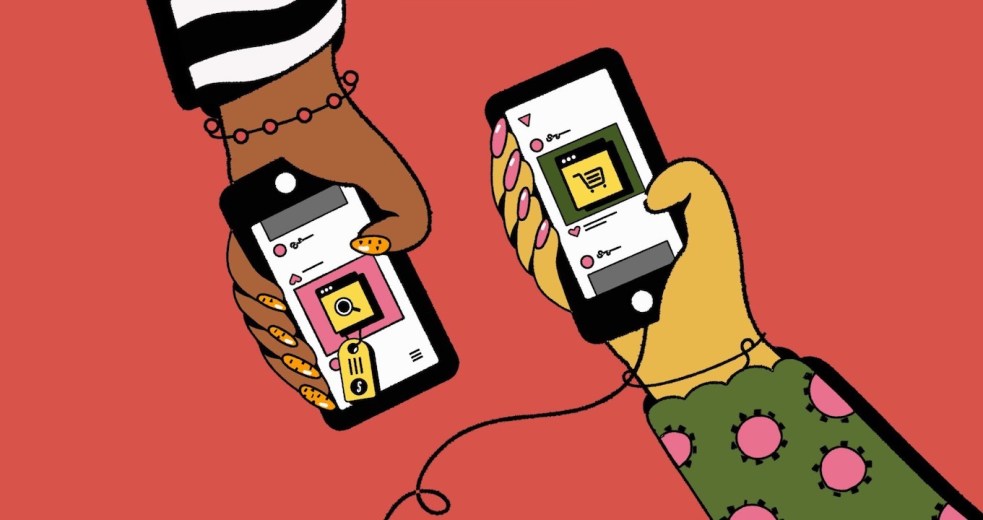 David Sandström, CMO at the buy-now-pay-later service Klarna, has thought a lot about who, exactly, he wants to host his company’s livestreams.

Klarna, like much of the retail world in 2021, is pouring significant amounts of investment into livestream shopping. In December, it broadcast a live fashion show called Livestyle out of its app, and in early March, it held a multi-day “Hauliday” event, in collaboration with Macy’s and the magazine Cosmopolitan. The event was recorded in the flagship Macy’s store in New York, and viewers tuned in through the livestream platform ShopShops.

Sandström sees promise in shoppable livestreams — multi-hour programs where a dedicated host tries on a variety of products, and talks with viewers in the comments. In China, a country that trailblazed the phenomenon, livestream shopping is a $66 billion business. Now, in the U.S., Nordstrom, Amazon, Mall of America, TikTok, Walmart and hundreds of other brands are trying to popularize the medium. That has, in turn, giving rise to a new category of retail professional: livestream shopping host.

Yet for Sandström and other executives, it’s less clear who the right hosts are: the big question, he said is “do you bring someone who is already established into your roster, or do you build one up?” In the U.S., QVC has mastered the art of shopping TV, with hosts who are both personable and incredibly attuned to camera angles — but those hosts undergo six months of training each, a length of time that makes it difficult for brands to retrofit to the new livestream shopping model. What’s more, the viewers of online livestreams are different from those of television’s past — finding the right talent remains a yet-to-be-solved conundrum.

As U.S.-based brands explore how to capitalize on the medium, they are taking a patchwork approach to sourcing on-camera talent. Some are partnering with influencers off of Twitch or Instagram. Others are hiring new employees or contractors who specialize in livestream hosting. And many more are tapping their own employees, from executives to sales associates, to staff their streams.

In China, working as a livestream shopping host is an increasingly common gig. While only some influencers are able to earn a full-time salary exclusively from hosting shopping streams — about 24.1% of livestream hosts in China said they made above $1,444 per month, according to a 2019 survey — average earnings have been increasing year after year.

Sourcing livestream hosts is more complicated than just throwing someone with a bunch of Instagram followers in front of the camera. “It’s very much an art,” said Arlyn Davich, president of the livestream platform ShopShops.

A successful livestream host, she said, does more than stage a nice shot. They have to know the products intimately, and they have to be able to interact with commenters — sometimes for hours at a time — in order to keep a session engaging. And while many Instagram- and TikTok-native influencers have begun trying out livestream shopping jobs, success on one platform isn’t a guarantee of success on another. “The skill of being an Instagram influencer is very different from the skill of livestream selling,” she said.

A new career track
There is currently a mad dash for livestream content, and the biggest names in retail are on the hunt. Amazon Live, the e-commerce company’s platform for livestream shopping, is mostly populated with content by outside influencers, who earn commissions on purchases they refer. But Amazon also has several of its own official streams, including one called Amazon Live Deals — there, advertisers buy slots in the middle of segments at a minimum of $35,000.

To staff those official streams, Amazon over the past year has hired close to a dozen on-air hosts who show up on camera and interact with audiences. One Amazon Live host, Katie Sands, was an Instagram influencer and fashion blogger before signing on to work with the company. She said she is paid as a contractor, and she earns a blanket fee — rather than a cut of commission — on each sale.

Because livestream shopping is still so new, partnering with influencers seems to be the most common strategy. The Instagram influencer Taryn Truly has done livestreams on YouTube for JCPenney, for instance. “I know a lot of companies have gone for the model where they start employing these influencers or signing them up for long-term contracts,” Sandström said.

One reason that influencers are popular hosts, he pointed out, is that they bring a following. In general, “people don’t naturally tune into livestreaming events” in the U.S. Even Amazon, which boasts one of the most highly trafficked websites in the world, only sees at most viewership in the high three figures for its shoppable livestreams, he said. (Amazon Live includes a counter indicating how many viewers are tuning in during each livestream.)

A number of agencies have popped up to supply retailers with livestream-native influencers at scale. One is the startup Buywith, which in May is launching a marketplace that connects brands with influencers who are well-versed in livestream shopping. Adi Ronen, CEO of Buywith, said that she is trying to provide scale to retailers and brands that are interested in investing in livestream shopping. “Instead of doing, let’s say, four sessions a month or 10 sessions a month, I can have hundreds of sessions per month,” she said.

Buywith recruits potential streamers who are active on IG Live or YouTube, and they do rehearsals to prepare their influencers for livestream shopping hosting. “We are not scouting specifically for big influencers because it’s not necessarily that they would be good at livestream shopping,” she said. Instead her focus is on mid-tier influencers — with maybe 20,000 followers “who actually have a really high engagement rate.” (Many other brands are focusing on the same cohort of micro-influencers for other marketing campaigns as well.)

ShopShops offers a similar service. While outside brands can have their own employees lead streams on the ShopShops platform, ShopShops also offers a team of internal livestream hosts to brands. It currently boasts around 500 available hosts globally. In February, the company launched a campaign to hire its next livestream host, asking participants to submit videos showing how they would sell a plain white t-shirt. ShopShops said that the winner would receive an upfront payment of $10,000, plus a 1-year contract to host streams for the company.

ShopShops also regularly posts job listings for “Livestream Host” and “Livestream Sales Associate.” ShopShops’ Davich would not reveal exactly how she finds hosts — “it’s part of the secret sauce,” she said. But, she went on, “some of our best hosts, they’re students, they graduated from FIT [the Fashion Institute of Technology in New York], and they love to shop and they know the best stores to go to.”

Sales associates become livestream hosts
While some brands seek out influencer talent, others source from within.  “Some brands,” said Davich, “select their top sales associates,” believing that sales is a leading indicator for how well someone might connect with a livestream audience.

Elsewhere, executives also make appearances on livestreams. Jill Renslow, the senior VP of business development at Mall of America, previously told Modern Retail she’s hosted at least one of the company’s livestream events, which are streamed through Popshop. Nordstrom, which created a livestream shopping platform in March, features events with outside experts who come in and host streams. But a rotating cast of Nordstrom executives, including its own fashion and jewelry buyers, introduce each speaker.

Daniel Martin, global director of artistry and education at beauty brand Tatcha, hosts weekly streams on the livestream shopping platform Newness. Martin said his once-a-week streams are “maybe 5%” of his job at the moment. Before Newness, he’d hosted streams on IG Live, but he said he didn’t consider himself an expert. “I don’t think you need someone super polished, or super famous, or anyone who has QVC training,” he said. “You just need someone who can hold a conversation and have a really authentic connection with the viewer.”

Deeper brand investment
But Tatcha isn’t relying solely on Martin to host livestreams. The company is planning a forthcoming livestream with an outside creator, and it is also looking inward for future hosts. In addition to Martin, the company is tapping interested members of its field team to host future streams. “When it comes to speaking to our product and to the brand, they are the experts,” a spokesperson for the company said. “We don’t necessarily need to outsource if we have the folks internally.”

Other retail and e-commerce brands are circling the same idea. The e-commerce company BorderX Lab recently posted a Livestream Host contract position, seeking a person who can “bring the products to life and create a desire for the product” on two to three streams a week, according to the job description. But it’s still rare for a retailer or brand to hire a full-time livestream host outright. Instead, many companies who spoke to Modern Retail said they were taking a wait and see approach: they’re looking to see how big livestreaming can get before building out a formal role for a host.

The growth of livestream shopping has spurred demand for more than just potential hosts. Many companies are also increasingly seeking out physical spaces — either in their own stores or offices, or in other locations entirely — where they can stage their streams. “We see a growing number of spaces that are just purely dedicated to this,” said Sandström of Klarna, who noted that his company has several studio spaces — one in London, one in Los Angeles, one in the Nordics — that it uses for streams. The spaces are “very unluxurious,” he said, located in old, closed-down stores. “They’re usually basements, but if you see it on screen, it looks amazing obviously,” he said.

One recent question Sandström has wrestled with is whether to make the setting more low-key. When planning a livestream, “do we send an influencer a live-cam, and have them do it in their kitchen?” he asked, noting that they’d go about their day and talk through products. In general, he said, “there are a lot of things that we’re still getting all the data on.”

If livestream shopping does soon catch on in the U.S., that patchwork approach to sourcing talent might soon coalesce into more formalized livestream jobs. “I think everyone will have a live commerce team in the future,” said Davich of ShopShops.

The future, she said, may look much more spontaneous than what many retailers and retail brands in the U.S. are doing now. Rather than having viewers tune in to a scheduled livestream, “I see a world where a manager of a store says, ‘Oh shoot, I have 20 sweatshirts I need to sell,’” she said, and then hops on a livestream to pitch it to viewers.