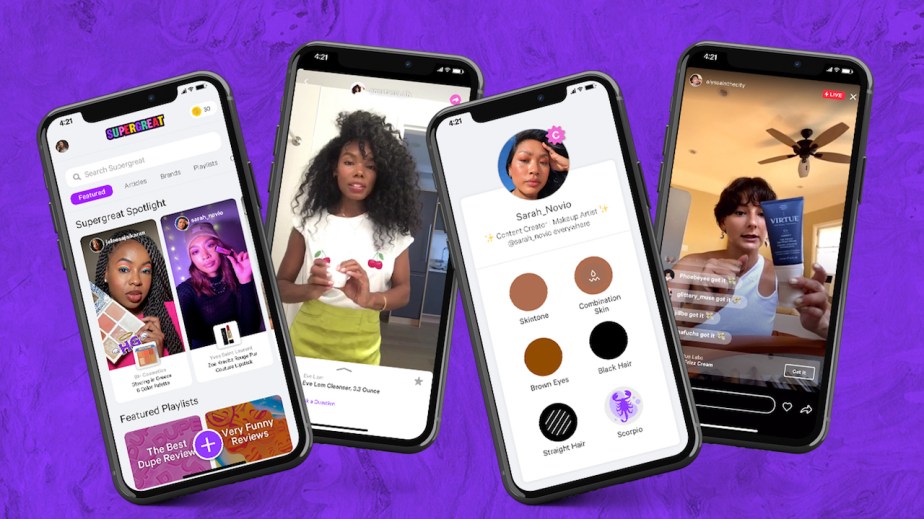 As beauty live-streaming heats up, startups Supergreat and Newness lead the pack

Live-streaming startups continue to spring up, and these specialized platforms are proving that beauty consumers are seeking out fun and interactive experiences. Of the lot, Supergreat and Newness have been especially adept at connecting those enthusiastic communities with brands.

Tyler Faux and Dan Blackman launched the Supergreat app in late 2018 as a short-form video-first community for content creators to review beauty products. Faux and Blackman were colleagues at both Tumblr and the Shopify-acquired Swedish e-comm company Tictail. The app soon attracted a community of passionate Gen-Z and young millennial users who have since created 200,000-plus 60-second review videos on approximately 35,000 products. An average of 4,000 uploads are now posted a week, according to Faux, who acts as CEO. Users typically find the app either through word-of-mouth or Instagram or TikTok, where creators often share their Supergreat review videos.

Community members are incentivized to engage on the platform through Supercoins, the in-app currency.  Supercoins can be accumulated through content views, by inviting others to join the app, or by participating in group challenges. They then can be redeemed for full-size beauty products during what is referred to as Supergreat’s “rewards drops,” which become available at 7 p.m. ET daily. Users can click on the reward and have the product sent to them for free, as long as they have accumulated the required amount of Supercoins.

“The Supergreat app community is incredibly zealous, enthusiastic and eager to try new products, which was a huge part of why we were excited to work with them,” says Priscilla Tsai, founder and CEO of Cocokind. Cocokind, which is sold primarily through retailers like Ulta Beauty, Target and Anthropologie, first debuted on Supergreat in May 2020 with three rewards drops, including it oil to milk cleanser, its resurfacing sleep mask, and its sunrei reishi gold highlighter stick.

“There’s also a level of creativity and authenticity that goes into the reviews that we don’t always see in typical reviews sections,” said Tsai, who added that “the products sold out incredibly quickly.” She declined to comment on how many products were sold through the drops.

But it was the pandemic that spurred the app’s expansion into live-streaming in the summer of 2020. “We were always really intrigued by live. We would have focused on it eventually, but the circumstances with Covid really accelerated our timeline,” said Faux. “Our users were all coming onto the platform at the same time every night, so we wanted to create a shared, synchronized experience for them. The app experienced 300% growth year-over-year, with users as a whole spending more than 30% longer on the platform each day since the launch of the live feature in July 2020.

Supergreat’s Lives have evolved over time. At first members of the Supergreat team were the sole hosts, interviewing brand founders or community members in themed conversations. But as the company continued building out its tools late last year, the feature became more robust, scalable and interactive.

In February 2021, shoppable live sales were introduced to further engage and reward the Supergreat community. They’re now hosted by eight of Supergreat’s earliest creators (referred to as Superhosts). Brand founders and guests are brought on to connect, tell stories and sell product and exclusive bundles directly to users. LoveSeen, Bomba Curls, Supergoop, Starface, People of Color, Wldkat, Glow Recipe and Wander Beauty have all joined Lives on the app since the shoppable feature launched.

Lives on Supergreat typically last up to an hour, and inaugural sales events have generated more than $60 for every minute that the hosts broadcasted, said Faux.

“We have a very, very enthusiastic and amazing community, so the reaction to Lives has been overwhelmingly positive. We’ve consistently seen thousands of comments per Live,” he said. Faux elaborated further, saying that, on average, the company sees about 2,500 comments in less than 30 minutes during any given Live and that products on sale sell out in seconds.

Faux said the company is currently exploring ways for brands to go live directly on the app, plus it plans to expand its Live host program this year.

But Supergreat isn’t alone in updating the live shopping model.  Newness is another platform that launched just as the pandemic hit in the first quarter of 2020. Still in beta testing after roughly one year online, Newness aims to foster the close-knit ties and strong community spirit that’s often associated with gaming. Founders and former Twitch colleagues Jenny Qian and Youri Park hoped to bring that feel to the digital beauty space.

“Live-streaming itself is not novel anymore, but we’re approaching it with our experience from gaming. We understand what kind of content works for live and how to make it compelling enough to engage and build authentic communities,” said Park, who is CTO.

Qian, who is CEO, added, “The beauty community has become drama-filled and toxic in many ways over the past few years. We’re trying to redefine beauty into something more inclusive, and to create a welcoming place for anyone to come in and express themselves. One viewer of ours said it best: ‘Newness is a place you go to show up, not to show off.’ That’s a huge differentiator for us, in my mind.”

This authentic messaging has content creators and makeup artists alike flocking to the platform to share not only their makeup and skin-care tips, but also their stories of struggle, loss and endurance. Qian said the Newness community has built up gradually from its first stream, as word-of-mouth has spread from its early creators.

One such creator is celebrity makeup artist Daniel Martin, who is also the global director of artistry and education at Tatcha. He started streaming on Newness to build more genuine relationships with his followers. “I’ve obviously been utilizing other social media platforms for a long time now, but when it came to interaction, I felt like I wasn’t truly connecting with anyone,” said Martin. “Everything is filtered and edited, but on Newness, everything feels so real. You can have this intimate connection with the people you meet and chat with on the platform, and that’s something I haven’t seen happen on social media in a long time.”

According to Qian, engagement on the platform is robust, with two-thirds of viewers choosing to chat on any given livestream, either directly with the creator or with other viewers.

Sensing a synergy, Martin decided to make an introduction between Newness and Tatcha. “We always want to offer something more to our community, whether that be beauty advice, a chance to try out products before anyone else or even just a space to talk with members of the Tatcha family. Newness offered this in a way we had not been able to bring before,” he said.

Tatcha exclusively launched its Silk Powder on Newness on March 4 with a two-day live-streaming event featuring conversations with Martin, Tatcha founder and CEO Vicky Tsai, and a variety of guests. Sephora followed and released the product on March 6. According to the brand, traffic from Newness to Tatcha’s DTC site resulted in a 10.6% sales conversion rate. Its Silk Powder has since become the No. 1 powder launch at Sephora, beating internal brand sales forecasts by 300%, according to Tatcha.

Park credits its gaming POV to Tatcha’s success on the platform. “That’s the expertise we’re providing when we partner with brands,” she said.

The Tatcha collaboration was the first shoppable sale of its kind on the platform, and it will not be the last. Rare Beauty is set to launch its summer 2021 collection, including its new Discovery Eyeshadow Palette, on Newness on Monday. But Qian and Park plan to introduce brands to the platform gradually and intentionally, to preserve the community’s authenticity. “We’re looking for brands that are willing to story-tell, because it’s all about building those connections first, as opposed to brands that are purely looking to push sales. Sales will naturally happen if you do effective storytelling,” says Qian.