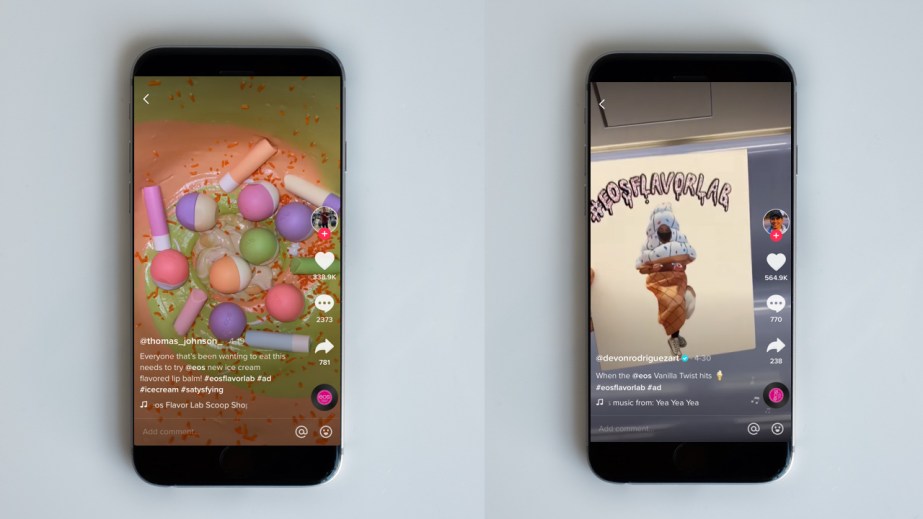 ArtTok is the latest TikTok community for beauty influencer marketing

If you look beyond TikTop’s top dancing stars, a host of smaller communities and niche influencers are thriving on the platform. The latest to attract the attention of brands is ArtTok.

The first brand to work with Charli D’Amelio on TikTok, Eos has set its sights on TikTok’s art community with a new campaign to promote its Flavor Lab lip balm. The brand enlisted 11 art influencers on the platform, including Devon Rodriguez, Audrey Hopkins, Ashley Xu and Thomas Johnson, to create art pieces out of the lip balms on TikTok, with posts boosted by ad spend. The campaign launched on April 16 and is still running, with more influencers set to post.

“We’ve predominantly worked with beauty, lifestyle and fashion influencers,” said Soyoung Kang, CMO of Eos. But this campaign reflects how the brand is “taking different approaches to keep mixing things up. [This helps the brand to] keep our audience engaged, keep our content fresh and continue to reach new people.” Boosted with paid posts featuring links to purchase the lip balms at Target.com, the #eosflavorlab hashtag currently clocks in at 20 million views.

The brand was especially focused on post reach and engagement, said Kang. “The content that’s rewarded is the content that gets the higher engagement, and it’s not necessarily about the inherent large following of the influencer.”

“Oftentimes to get the widest audience, you have to really dig into these niche accounts within TikTok,” said Eric Jacks, chief strategy officer of Collab, the digital creator network that worked with Eos on the campaign. It identified art as one of the rising trends on the platform. #ArtTok currently has 1.2 billion views. “If everyone is always marketing to the same audience, you have to figure out what is your point of differentiation,” he said.

TikTok’s e-commerce functions are a growing focus for Eos. “As an industry, we’re still a little bit early, in terms of taking advantage of social commerce overall,” said Kang. “We believe [it] will eventually be an incredibly strong component of our commerce or e-commerce strategy.”

TikTok is a big priority for Eos, which launched its first TikTok campaign in 2019 and will spend approximately 15% of its total marketing budget on the platform for 2021, said Kang. In addition to paid campaigns, the brand has also benefited from organic growth. The brand saw a 2,500% increase in orders and 45,000% increase in site traffic when TikTok influencer Carly Joy candidly recommended the brand’s shave cream in a video that went viral in February 2021. The video has earned over 19 million views and 5 million likes to date. Eos started working with her officially and created a special product line as a result, called “Bless Your F*ing Cooch” based on the original video.

“I know that there are some brands who still view TikTok as experimental,” said Kang. “We are way past that. TikTok is table stakes.”