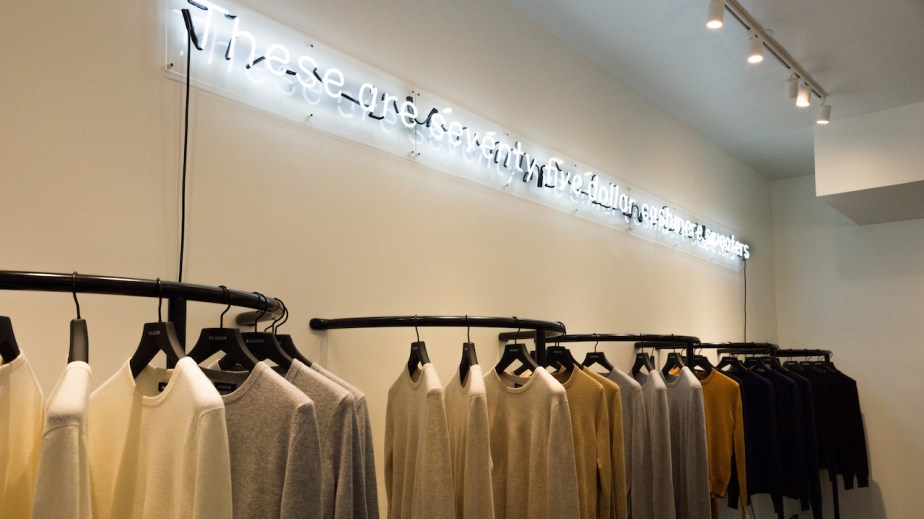 Naadam’s retail twist: A store that only sells one type of sweater

The front window of cashmere sweater brand Naadam’s SoHo store is emblazoned with a giant “75,” advertising the brand’s $75 cashmere sweater. But the store is not just highlighting the $75 sweater; it is literally the only thing available to purchase in the store.

Founder Matt Scanlan opened the store dedicated to the single product as a reaction to the sometimes overwhelming number of choices consumers face.

“It’s a much simpler proposition,” said Scanlan. “Some people want fewer choices. They don’t want to be bombarded with options. The fewer SKUs we offer, the faster and simpler it is for them. We can also grow the company faster because we don’t need to analyze data across a bunch of variables. It’s one sweater in a handful of colors, so it’s easier to optimize.”

Overall, Scanlan is happy with the performance of the store, which opened in November of last year and is the brand’s third physical location. It has another store in New York, and the other is in Virginia (both of which sell other non-sweater products).

Though the brand’s internal supply line and manufacturing capabilities are not quite strong enough to support another single-product store, Scanlan hopes to open another store dedicated to $75 sweaters this summer on the West Coast, most likely in San Francisco. At the same time, he plans to open a full-selection store nearby. He says that the way customers shop, it is important to have the single-product store and the full-selection store within a reasonably close distance to each other.

These stores will be supported with the $16 million in funding Naadam received in July of last year, primarily from Vanterra Capital, an investment firm that has recently invested in a number of DTC fashion brands, including Bombas and Felix Gray.

Scanlan said the simplified store, plus the fact that it offers sweaters customized with embroidery and monograms on site, has led to a significant conversion rate, particularly compared to the brand’s online store. Naadam’s online store typically sees hundreds of thousands of visitors per month. Despite that, conversion rates are low, around 1 or 2 percent, according to Scanlan. Conversely, the single-product store sees far fewer people actually visiting — a few hundred per day — yet conversion rates are much higher.

Naadam has been promoting the store heavily through social media. Scanlan says that, like most DTC startup companies, the brand has been relying heavily on Instagram as a vehicle for raising awareness of the store. Beyond that, the store itself serves as its own marketing by advertising the concept boldly on the storefront for people passing by.

While Scanlan was quick to point out the many benefits of the single-product store, such as its ability to attract new customers walking by with its intriguing premise, he noted that it is not without its own challenges. For one, customers coming in expecting to browse Naadam’s full selection may be disappointed to find that there is only one thing to find in the store, and if it is not to their liking, there are no other options.

“We do get people who come in and want the whole selection we have online, but that’s why we have two stores within 10 blocks of each other. If you want the full collection, you can go to our other store on Bleecker Street a few blocks away,” said Scanlan. “The only real challenge is [pieces] sell too fast. We can only hold so much there, since it’s a small store, and it can get cleared out in less than a day.”

The single-product store may be a rarity even in the adventurous space of DTC startup brands, but it speaks to a larger trend in fashion and retail of new brands that are hyper-focused on a single category. Dagne Dover only makes bags, Warby Parker only makes glasses, MeUndies only makes underwear. Allbirds has opened stores focused on just a small selection of shoes. Each of these brands has carved out a speciality and is laser-focused on that category.

“Uber-focused brands, selling only one product category, have become a hot trend in retail,” said David Naumann, vp of marketing at Boston Retail Partners. “If you can differentiate your product in a way that’s compelling, it can drive enough demand for a profitable retail business. This has been the case for successful subscription services for products like razor blades, socks and ties.”

Scanlan said it is easier for smaller brands to compete by specializing, rather than trying to have everything for everyone. As the market of DTC fashion brands grows increasingly crowded, specializing in a single category makes it far easier to get going and compete against larger brands which tend to extend themselves into more categories.

“In today’s retail climate, consumers are more targeted with their shopping and are looking for the best quality in a trusted brand,” said Avery Faigen, retail analyst at retail platform Edited. “Therefore, customers are converting to single-category brands as the experts and go-to brands for distinct products, over larger retailers.”

“A lot of the funding in e-commerce and apparel happens when you can optimize your KPIs efficiently,” said Scanlan. “Brands that have a simplified, easy-to-understand product model succeed; they get more money, they proliferate.”