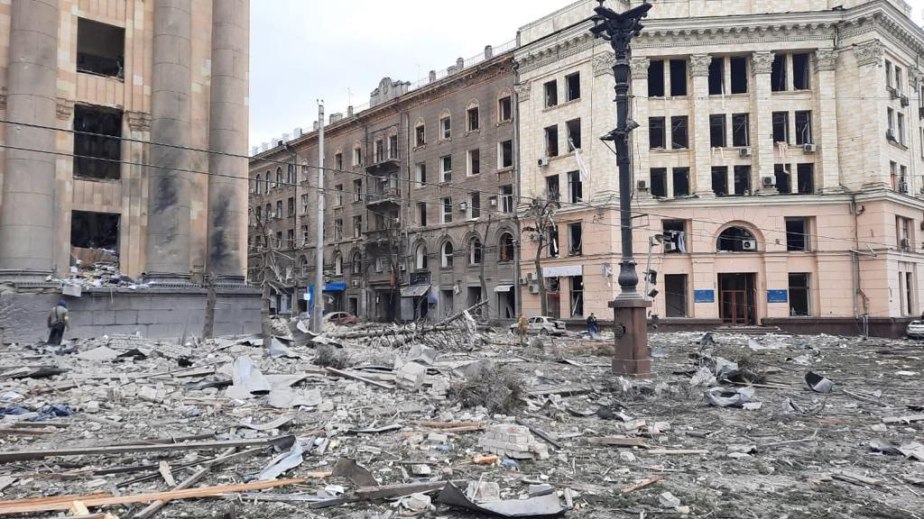 Designers and fashion houses Milan Fashion Week were slow to respond to Russia’s invasion of Ukraine on Thursday. Now, the fashion community is using its influence to enforce cultural and luxury sanctions.

When Milan Fashion Week started on February 22, nothing was unusual about the situation in Ukraine. In fact, many buyers, models and brands from the country were embarking on travel to Milan. But two days later, Russia invaded Ukraine and the situation rapidly deteriorated, with more than 600,000 Ukrainians and foreign residents fleeing the country.

Fashion stylist and editor Nadiia Shapoval spent five days getting to the Polish border from Kiev, leaving her family behind. “The Ukrainian fashion community has now stopped working completely,” she said. “It took me five days to get to the border with just my car. I’m still wearing the same clothes as when I left. Some Ukrainian people are now giving out blankets, others are fighting on the battlefield. Some designers are spreading information on what is really going on in the country. And a lot of famous [local] brands are using their PR departments to cover the situation.”

Nastya Ivchenko and Zhenya Skibina, owners of Ukrainian PR agency Public Kitchen, suggested that Ukrainian PR agencies cooperate and act together to disseminate as much information as possible and call for help. Anna Pagava, founder of the Gogola PR agency, said, “As a PR specialist, I can say that my way of fighting is achieving maximum publicity. I live in Los Angeles, but most of my team, friends and parents are in Kyiv, and my heart is torn to shreds from what is happening to them now and how much indifference they have to overcome when telling their stories. I constantly receive news about new victims and further destruction, and it has become my routine to check in on everyone I know to see if they’re OK.”

The West has responded to Russia’s assault with severe sanctions and bank asset freezing, with an aim to restrict Russia’s economic capital. Germany has pulled out of its Nord Stream 2 gas pipeline deal with Russia and is preventing some Russian banks from using SWIFT, the global banking payment network. Meanwhile, other markets like sport and arts have banned sales of events in Russia.

In response to the invasion, luxury stock prices fell on Thursday, with LVMH, Kering, Richemont, Prada and Burberry all falling 3-6%. Analysts noted that this may impact consumer sentiment around making luxury purchases. Luxury goods exports to Russia from Italy were not included in European Union sanctions, with many Milanese fashion houses still reliant on Russian oligarch consumers.

Protests about Ukraine in Milan paled in comparison to the crowds that gathered at fashion week shows, including to view Mathieu Blazy’s first collection for Bottega Veneta, appearances by celebrities like Rihanna and Kim Kardashian, and Gucci’s catwalk collaboration with Adidas. “Gucci’s hype collaboration with Adidas was very much of-the-moment,” commented Melissa Moylan, creative director of trend forecasting company FashionSnoops.

The fashion crowd seemed paralyzed, in terms of tactfully responding to the situation, with some of their statements being called out as insensitive. “While the mood was high in Milan, it was also somber with the realities of war unfolding. It would be appropriate to see more gestures [made in response to the war] during Paris [Fashion Week],” said Moylan. As the pandemic rolls on in Asia, many show-goers, buyers and editors were absent from the guest lists.

But some designers seized the moment to show their support – Giorgio Armani put on a show with no music out of respect to Ukraine. In an Instagram video shared on Sunday, the designer posted a statement saying, “My decision not to use any music was taken as a sign of respect towards the people involved in the unfolding tragedy in Ukraine.” The designer was also the first to react to the pandemic outbreak in Italy and held his fall 2020 show behind closed doors.

Missoni president Angela Missoni has also said she supports Ukraine in this time of crisis. Meanwhile, Hungarian brand Nanushka has issued a statement on Instagram saying it will support refugees by providing them with accommodation, workplaces, transport and translators. The brand is also cutting wholesale partnerships and customer orders in Russia.

Other designers had gone ahead with their shows, while donation roundups and collection requests were sent around on social media. Influencers like Isabelle Chaput and Nelson Tiberghien from @young_emperors (259,000 followers, Instagram) showed their support through outfits matching the Ukraine flag, while others like Moldovan Doina Ciobanu (@doina) shared resources in Instagram posts. Valeria Zhilyova, owner of Zhilyova Lingerie, is working with other Ukrainian influencers to help people find contacts, rides, shelters, medicine donation organizations and asylum options.

Pagava said, “This is a good example of how the reputation gained over the years and hard work on a fashion brand now gives [Zhilyova] the opportunity to help her compatriots. She is currently providing maximum assistance and benefit through [her company’s] communication channels. You can’t underestimate the fashion industry, as the whole world follows it. ”

Models including Mica Arganaraz and Bella Hadid also posted statements of support. Hadid’s post said, “My heart is hurting for Ukraine and all those affected by this unimaginable reality. Putin’s actions are a threat to every democratic country in the world and must be stopped. I pray that the support other countries provide can give Ukrainians what they have voted for and deserve.”

Italy sells roughly €1.2 billion ($1.3 billion) in luxury goods to Russia each year, according to its fashion federation, the Camera Nazionale della Moda Italiana. At the beginning of Milan Fashion Week, Carlo Capasa, president of the Camera della Moda, said, “At this moment, what is important is the life of people and peace.” While there were rumors of Italy asking for the luxury industry to be omitted from the Russian sanctions, the news has not been confirmed. The office tweeted: “Italy’s position is fully aligned with the rest of the EU. #Ukraine.” Many Ukrainian designers and creatives have been encouraging the international community to support Ukraine by cutting off ties with Russia.

Olya Kuryschuk, founder of Ukrainian fashion magazine 1 Granary, has been working with the Ukrainian government to organize protests in cities around the world. The founder has now released an open letter to the international fashion community to condemn Russia’s actions in an industry-wide appeal. So far, the signatories include editors and writers from platforms like i-D and Dazed, fashion designers in the UK and abroad and other creatives.

Talking about the sanctions, Shapoval said the international fashion industry needs to apply its influence. “The luxury industry should ban sales in Russia and stop deliveries to this country. They should ban Russian designers from selling in the European Union. For a lot of luxury retail brands, they don’t want to do it, but they need to understand that fashion is different — every action is important. The most important thing in fashion now is to be conscious and to understand that, when somebody comes to kill children and women, that is something that you need to stop.”

Vogue Ukraine and L’Officiel Ukraine have also put forward an international fashion and luxury goods embargo request focused on fashion leaders like LVMH, Kering, Chanel and Burberry, in an attempt to impose cultural and economic sanctions on Russia. So far, YNAP and Balenciaga have both shown their support — YNAP is suspending shipping to Russia, and Balenciaga has cleared its Instagram feed and posted a Ukrainian flag and a donation to WFP. It is also opening up its platform to relay information about the situation in Ukraine. It is the first brand from fashion corporation Kering to do so.

Internationally, the Fashion Group Foundation has also announced a “Help Ukraine” fund in partnership with Delivering Good, rallying the fashion industry to raise funds and act on behalf of Ukrainians in need. According to Gary Simmons, acting CEO for Delivering Good, “While the situation is still unfolding, Delivering Good will continue to evaluate and assess the situation and will be ready to act as needed.”