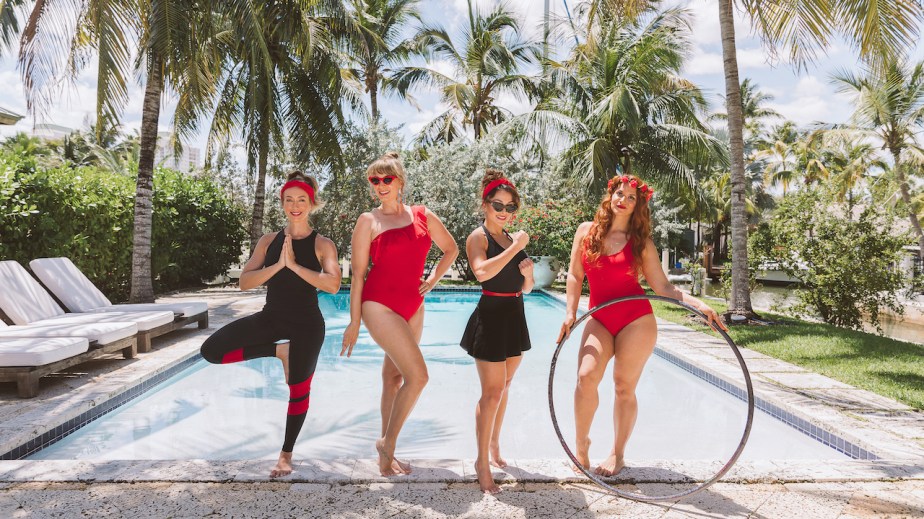 Period underwear brand Thinx has been all over social media and subway stations since launching in 2014, but the period apparel space is growing. As consumers become more conscious of the environmental impact of pads and tampons and more comfortable with alternatives (like period-proof underwear), brands like Ruby Love, Knix and Flux are popping up with plans to win over female customers.

In 2017, the global feminine hygiene products market was valued at $31.2 billion, and it’s projected to reach $62.84 billion by 2026, according to a report from Research and Markets.

“With young women becoming more and more open to talking about ‘forbidden’ topics such as menstruation, it’s created a unique opportunity for brands to offer women’s products that fit in seamlessly with every aspect of their lifestyle,” said Sade Strehlke, health and wellness director at Refinery29. “Plus, people like options, and let’s be honest, underwear is more comfortable than a pad or a tampon.”

Thinx has seen success as an early player in the leak-free period underwear space — in 2017, the company brought in $39.6 million in revenue. But now other companies are aiming to carve out their own piece of the global feminine hygiene products market, with most zeroing in on an apparel category. Many have set their sights on activewear.

On Tuesday, Ruby Love announced $15 million in funding backed by investment house The Craftory. Founded in 2015, Ruby Love started with a focus on period underwear for women. It began rolling out styles for women and teens in January 2016. Within three months, it expanded its collection to include swimwear, activewear and loungewear.

Thinx also sells period-proof training shorts, as well as unitards and leotards for working out. All of those items launched in early 2017, after Ruby Love’s line of activewear. In June, the brand launched Thinx Air, a lightweight period-proof underwear designed for exercise. The launches marked the brand’s entrance into the activewear market, set to hit $567 billion by 2024.

“We’ve really set out to change the category. We want to give people with periods the best solutions, and we want to offer them an alternative. That could be relative to their comfort or to what is more sustainable, or to what is more safe than putting different chemicals in your body,” said Siobhan Lonergan, chief brand officer at Thinx, in a previous interview with Glossy.

But Ruby Love had a head start on the activewear and swimwear categories.

“Because the company grew so fast, I was pretty much able to bring all of my products to market in 2016,” said Crystal Etienne, founder and CEO of Ruby Love. In just three and a half years, Ruby Love has sold over $10 million in period apparel products, without any VC funding. “I bootstrapped my way to the top and grew my company with just a $25,000 saving investment,” she said. For now, Ruby Love sells primarily though its commerce platform, plus it has been testing shoppable posts on Instagram.

Etienne said she believes the design of Ruby Love’s products, which come with optional, double-sided pad inserts, is what sets it apart from competitors. The inserts are machine washable and can be used twice, once on each side. A pack of four inserts costs $25, while Ruby Love underwear starts at $17.99.

With its new influx of funding, Ruby Love will focus on expanding brand awareness even further. While the brand grew rather quickly, most of the growth came from word of mouth — moms buying the product for themselves and their daughters, and sharing the brand with other moms. Just last year, Ruby Love started to experiment with marketing, and now it has a full marketing team that’s aiming to move beyond the brand’s social media and email marketing focus with more paid digital ads to capture younger shoppers.

“Out-of-home is definitely interesting in this space, because it’s a good way to make a big splash. But brands in this space, in particular, do need to be targeting a younger consumer, like Gen Z, who haven’t necessarily bought into other generations’ views of periods,” said Juliette Leavey, director of digital strategy at advertising agency Deutsch NY. “That option to focus on digital and social is big, because that’s obviously where that younger consumer is most well-versed.”

“I will continue to invest in the brand’s expansion and product assortment,” Etienne said. While she declined to share what will come next, Etienne said Ruby Love plans to expand into a new category in the coming months to take Ruby Love to the next level and will further expand the brand’s core product offering.