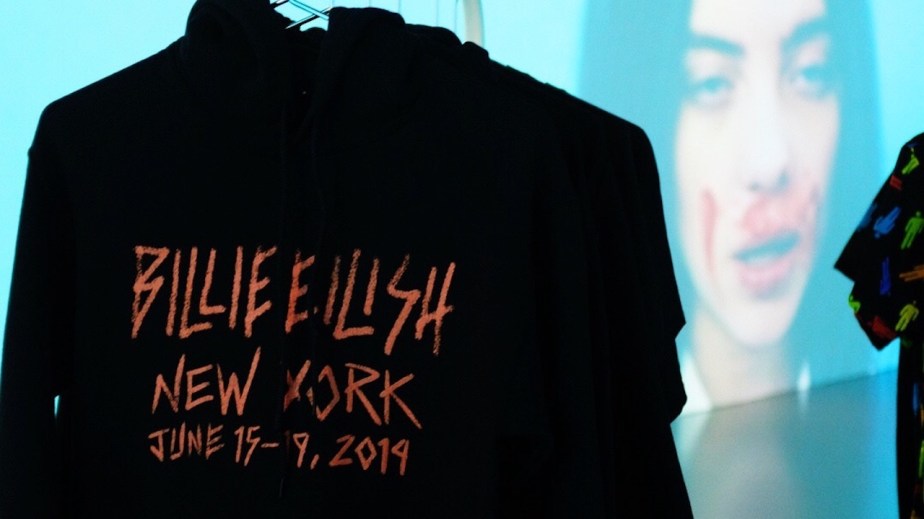 Why musicians are venturing outside of concert venues to sell merch

Today, pop-ups and exclusive collabs aren’t just tools for direct-to-consumer brands looking to raise brand awareness and sell product offline. Increasingly, artists are using pop-ups to sell exclusive merchandise that fans can only get if they visit these locations, typically hosted in major cities like New York City and London.

“Using a pop-up space, separate from selling merchandise at a concert venue, is a safer, more controlled way of allowing fans to interact with, and often meet, their favorite artists. It’s easier to provide a safe but fun, more intimate experience this way, which many artists and fans are seeking,” said Mila Inge, senior account manager at Storefront.

In the past year, artists including Billie Eilish, Justin Timberlake, Shawn Mendes and Playboi Carti have opted for the pop-up strategy, filling stores with exclusive merchandise. Playboi Carti worked with Universal Music Group’s merchandise arm Bravado (the go-to collaborator for major artists including Kanye West and Ariana Grande) to take a 15-piece exclusive capsule collection into Paris-based boutique Nous and made an appearance at the space. It led to massive crowds and likely sales (although Bravado does not publish specific sales numbers). Vivendi, parent company to Bravado and UMG, reported that merchandise sales from January to September 2018 totaled around $216 million.

While sales can be big for these artists, the pop-ups and merch also work to build demand and brand buzz. The exclusive nature of these ventures takes note from typical streetwear drops, popular among Gen-Z shoppers, where items are limited and often sell for double, even triple, the price on resale platforms. By keeping products exclusive and available only in a single distribution channel, artists are practically ensuring high foot traffic and sold-out product.

A lot of the time, artists launch the pop-up tied to concerts in that area, drumming up excitement for upcoming shows and giving local fans a chance to see a new side of themselves or the band — mainly through pricey hoodies, tees and other exclusive items. At Justin Timberlake’s pop-up shop, held last February in conjunction with his “Man of the Woods” album, hoodies sold for $85, Jordan sneakers for $200 and Pendleton blankets for $300. Kanye West has also been known to open pop-ups and drop exclusive merchandise around his concerts and albums. For West’s Life of Pablo tour in 2016, he sold most hoodies for $95, shirts for $4 and hats for $40. Merch from that tour reportedly brought in $780,000 from one night alone at Madison Square Garden.

Syama Meagher, owner and chief retail strategist at Scaling Retail, said the influx of artists into the pop-up space and launching exclusive apparel lines and collabs makes perfect sense. The reason: The barrier to entry is extremely low for clothing design and for temporary retail space.

“There’s so much more access now — so many more opportunities to private-label or collaborate on goods. Having a pop-up with branded merch is no longer a difficult thing to do,” she said. “People in the industry are looking to find a way to be more than just music to their customers, and they are looking to take a piece of that market.”

Just before hitting New York City for several sold-out shows in June, artist Billie Eilish opened her own pop-up experience in SoHo. In it, she sold new exclusive apparel each day. The pop-up was filled with apparel from Eilish’s own merch line, Blohsh, which launched in March 2018. As an Interscope artist (owned by UMG), Eilish worked with Bravado to bring the collection and exclusive apparel sold in her pop-up to life. On Eilish’s e-commerce store, fans can buy Blohsh tees for around $30, hoodies for $55 and beanies for $15. Bravado and UMG did not respond to request for comment.

While many artists are turning to exclusive merch drops and launching their own apparel lines — take Migos (another Bravado client) rolling out in March 2018 a limited capsule collection alongside vintage T-shirt dealer Patrick Matamoros, with pieces priced $85 to $500. Meagher said one of the best strategies for musicians looking to get into the apparel space is through licensing.

“If you’re interested in making revenue and not investing in the operations piece of it, I think it is a much smarter approach to explore licensing — unless these artists and bands are ready to launch a whole consumer goods division within their business model. Licensing is important if people want to push forth their brand name without doing a lot of legwork,” Meagher said.

Should artists, big or small, continue to go down the pop-up route, Storefront’s global communication manager Arielle Crane said sticking to the artist’s personal brand and overall vibe is key.

“It’s important to launch a pop-up store that’s in line with their music and personal brand. It’s also important that they choose the right location for the pop-up store in order to attract the most fans and to be highly visible and buzz-worthy for maximal press and exposure,” she said.