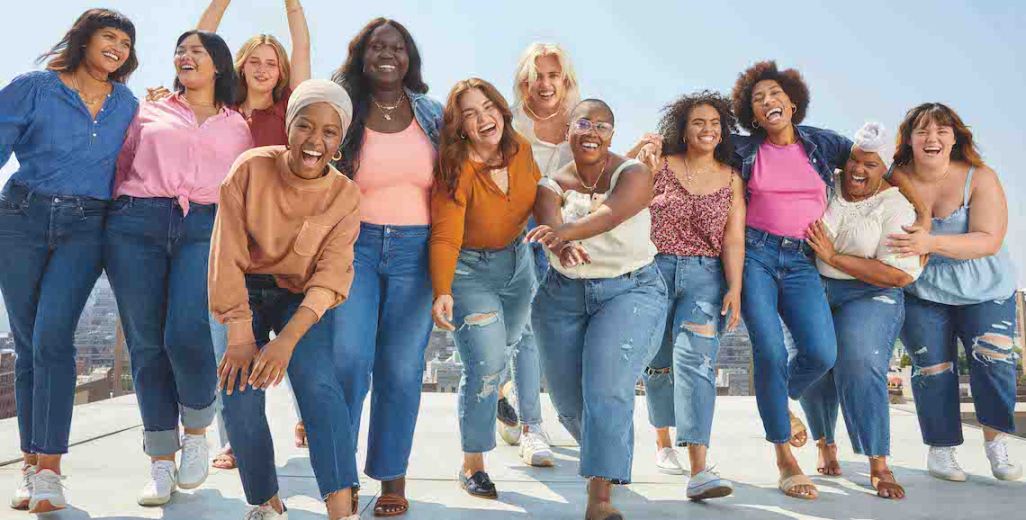 Welcome to the Weekend Briefing, a rundown of the fashion and beauty news to know now. This past week, Old Navy abruptly lost its CEO, Victoria’s Secret continued its reputational overhaul and more fashion brands created video game obstacle courses, or “obbys.” Looking forward to next week, Amazon will announce its first-quarter earnings, which may shed more light on its fashion ambitions. Plus, don’t forget to listen to the latest Glossy Podcast with Vestiaire Collective’s Fanny Moizant. To receive this briefing in your inbox every Sunday, sign up for the Glossy Weekend Brieifng here. –Danny Parisi, sr. fashion reporter

What you may have missed
Noteworthy stories from last week

What’s happening at Old Navy?
In 2019, Old Navy was a shining star in the Gap Inc. portfolio, outselling its sister brands so much that Gap attempted to spin Old Navy off into its own company. That plan never came to fruition, but Old Navy has remained a successful brand ever since.

That’s why it came as a shock this week when, on April 21, Old Navy abruptly announced the departure of its CEO, Nancy Green, who had held the title since 2019. The announcement was terse and offered little in the way of explanation.

​​“As we look to seize Old Navy’s potential, particularly amid the macro-economic dynamics facing our industry, we believe now is the right time to bring in a new leader with the operational rigor and creative vision to execute on the brand’s unique value proposition,” Sonia Syngal, Gap Inc.’s CEO, said in a statement.

Alongside the departure of Green, Gap also cut down its sales forecast for the first quarter. Originally expecting declining sales in the single-digit percentage, the new forecast now projects mid-teen percentage drops.

Old Navy makes up more than half of Gap’s annual revenue, so the brand acts as a good barometer for the fortunes of the entire portfolio. Share prices of Gap Inc. dropped 20% after the news, showing that investors are concerned, as well.

Fashion brands are making ‘obbys’
As part of its marketing to tweens, Victoria’s Secret’s new tween-focused brand Happy Nation will launch a series of obstacle course levels (also called “obbys”) in the popular video game Roblox. The courses will launch in May and are meant to get the brand in front of its target audience of 8- to 13-year-olds. Fifty-four percent of Roblox’s users are reportedly under the age of 13.

In March, Minkoff told Glossy that her dalliances with the metaverse are still experimental.

“Right now, everyone is just throwing spaghetti at the wall,” Minkoff said. “This industry is known for jumping on bandwagons, but right now, it’s still unclear what exactly will work for each brand. Every brand is different. Not all are the right fit for digital merchandise.”

Vogue launches first membership program
On Wednesday, Vogue announced its first-ever membership program, called Vogue Club. For $25 a month, members get access to behind-the-scenes content from Vogue shoots, invites to private members-only events and weekly classes, and Q&As with industry insiders. The move comes at an interesting time for Vogue. While its parent company Condé Nast saw double-digit increase in revenue to $2 billion last year, making it profitable for the first time in years, Vogue itself has recently been heavily criticized for missteps around race, including allegedly whitewashing a cover image of Kamala Harris last year.

Victoria’s Secret’s transformation continues
Victoria’s Secret has continuously tried to shed its reputation as a brand only made for beauty-standard-adhering women with several new additions aimed at inclusivity.

Victoria’s Secret has been open about its conscious efforts to shed its earlier image. In a press release, the company called Happy Nation “another celebratory milestone in the company’s continued transformation journey and evolution.”

Is “body-positive shapewear” an oxymoron?
With the launch of new brands like Yitty and the growth of Skims, shapewear is having a moment. But how do brands reconcile the movement toward body acceptance with a category built on the idea of altering your shape? Some, like Kurvwear, claim it’s not a contradiction at all — particularly because they’re de-emphasizing slimming and downplaying the idea that shapewear should be hidden.

Canada Goose targets Gen Z
The winter coat brand is shedding its reliance on fur, in the hopes of gaining the attention of Gen Z. CMO Penny Brook told Glossy that attracting Gen Z, through efforts toward sustainability and renewed focus on the generation’s most-used social channels like Snapchat and TikTok, is a top priority. There’s evidence it’s working. Gen Z now makes up more than a quarter of Canada Goose’s online sales.

The return of the print catalog
DTC brands, once touted for their savviness with digital marketing, are turning to a new strategy with surprising success: print catalogs. According to the 8-year-old fashion brand AYR, which achieved profitability for the first time mid-pandemic, catalogs were a major factor in its success. The return on investment, according to AYR, is reportedly two- to three-times higher than Facebook advertising.

“There’s [now] huge interest among the financial community in resale because everybody’s started to understand that resale is not a trend, but it’s here to stay,” Moizant said on the latest Glossy Podcast.

The Week Ahead
Stories we’re following

Amazon’s earnings will show its fashion progress
Amazon will report its first-quarter earnings on Thursday, providing a good look at how its fashion enterprises are progressing. Likely to be mentioned is Amazon’s Made For You custom-fit apparel line. The line launched in 2020 only selling plain cotton T-shirts, but with dozens of custom-fit options like neck opening and sleeve length. Last week, the line was updated to include athletic apparel, as well.

But while Amazon is the largest apparel retailer in the world, it has struggled in an area it desperately wants to gain a foothold in: luxury fashion. Amazon’s Luxury Stores launched in late 2020 with only a single brand, and over a year later, there were only a scant few additions. Part of the skepticism luxury brands had of the project was that they didn’t want to be associated with Amazon’s cheapness. That skepticism seems to have been well-warranted. Right now, Amazon is selling luxury brands like Aquazzura and Missoni for 50% off.

Join us for a Glossy+ member-exclusive event! On Thursday, April 28, we’ll be at Frame’s Soho store (51 Greene St.) for a live podcast featuring Frame co-founder and creative director Erik Torsetennson. The podcast discussion will start at 6 pm ET. Plan to arrive early to mix and mingle. Get all the details here.