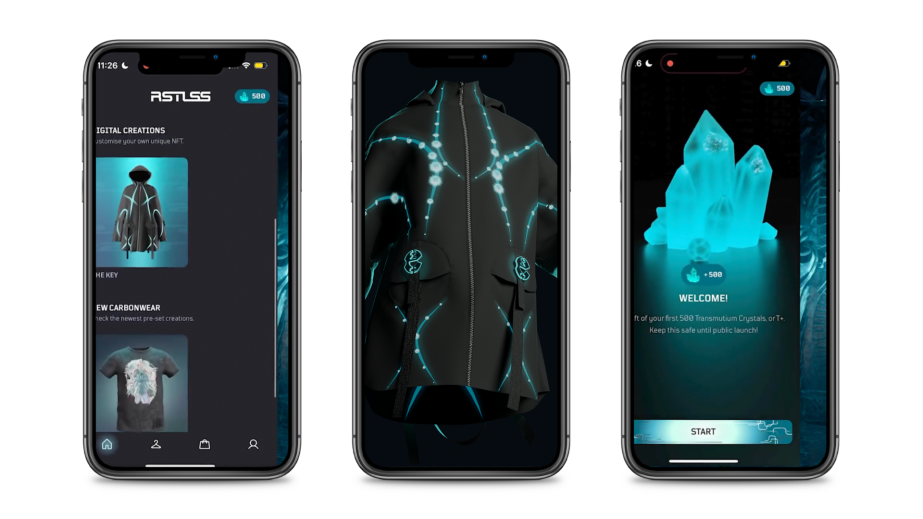 Brands are realizing that consumers aren’t in-tune with innovative web3 concepts, leading many to reign in their tools, marketing and language to engage the everyday shopper. Web3-native fashion brand RSTLSS, created by London-based designer Charli Cohen, is leveraging apps and TikTok to bring groups including Roblox gamers and trend-setting teens into its tech-forward world.

RSTLSS launched on December 15, after raising $3.5 million in March from investors including metaverse angel investor Paris Hilton. It’s since minted all of its 1,000 NFT “keys” through an app. The unconventional app was developed to ease consumers into the RSTLSS world. It features drops, lore, customization opportunities,  gaming integrations and earning structures, including experience points and skill trees.

Typically, NFTs are launched through NFT marketplaces like Opensea, but Cohen is hopeful that RSTLSS’s app and web platform, which will launch in the second quarter, will become a default solution for mass web3 adoption.

Shari Glazer, web3 investor and founder of web3 branding company Kalos Labs, said 2023 will be the start of mass adoption of web3. “The crypto winter has been an incredible building opportunity for people working on web3 infrastructure and tools,” said Glazer. “But [seamless] onboarding of the general public has been the missing piece to this puzzle. The barriers to web3 are high for the average person. With Instagram launching its web3 program this year and Amazon possibly launching an NFT marketplace, you’re going to see that all the major social media players establish a presence starting this year.”

The RSTLSS app is currently hosting an NFT jacket drop, centered on a customizable digital jacket sold with an NFC chip-linked physical twin. The unisex RSTLSS jacket functions as a digital collectible, as well as a designer skin to be worn across gaming platforms including Roblox, avatar platform Ready Player Me, metaverse worlds and AR/VR-social integrations. It will also function as a key to future launches: The jacket gives the owner exclusive or early access to the brand’s sales, updates and collaborations. While many digital garment NFTs exist, not many are available through a brand-owned, dedicated NFT app, and even fewer are wearable in-game.

“Collectors download an app, currently in beta, and then minting is done on iOS,” said Cohen. “It’s a very different UX, and it adds a different proposition to current NFT formats. We’re trying to ensure a diverse holder base, rather than allow people to take the majority of the NFT supply.”

The app also functions as an essential tool. The physical jacket’s NFC chip, which registers the garment on-chain, can only be scanned through the app. What’s more, only the app can unlock the AR lenses that allow users to try on the digital jacket. “We started building the app in spring 2021. I thought, ‘If we can make this work through a mobile app, then we can make it work anywhere,” she said. “An app is the most challenging place for tackling UX, so we put in a lot of resources into getting it set up first.”

“There’s a drop we’re doing later this year, which is going to bring in a Tamagotchi-like element that will be native to the app, as well,” said Cohen, adding that she wanted the app to be more than a selling point. “It will also be for those who are just sitting on the tube and want to play around with customizing and creating garments.”

She added, “There has been great skepticism around NFTs from the gaming community. There needs to be a big rebrand and abstraction away from NFTs, blockchain, web3 – everything that’s almost become this caricatured metaverse meme. But the gaming space is one of the only spaces where consumers natively exist in digital, understand the value of digital assets and put a lot of value in their digital identity.”

Within games, especially in Roblox, “you have this huge user-generated content economy, where people have realized they can start building a brand and a business out of creating and selling digital assets,” said Cohen. Roblox creator studios like House of Blueberry and creators like Samuel Jordan have built profitable businesses by working with brands like Natori, Stella McCartney and Forever 21.

So far, RSTLSS’s 1,000 users skew heavily toward the traditional 20- to 30-year-old web3 collector. However, with further gaming integration, creator economy elements and new social media approaches, Cohen believes the user base will expand to be more inclusive. The brand is in talks with traditional brands for collaborations, but it’s first prioritizing creativity and access.

According to Cohen, teenage girls set trends and move culture forward. “Outside of this existing web3 and gaming communities that we wanted to launch into first, teenage girls are where we’re focusing,” she said. Roblox, where RSTLSS skins will be available to shop and wear this year, has a 44% female user base. Along with Roblox, RSTLSS is reaching the target audience on platforms centered on anime and K-Pop, as well as social media.

According to Cohen, as players and creators age out of Roblox, web3 will become a natural next step. It could also attract TikTokers, assuming the current conversation shifts. “Like among the gamer community, there’s a lot of skepticism on TikTok around web3 and NFTs,” said Cohen. “We will be working to shift that narrative. Also, because RSTLSS has a lot of lore and narrative around it, we will be creating story characters that have their own TikTok accounts.” The TikTok accounts will be launching in step with the brand’s main browser experience next quarter.