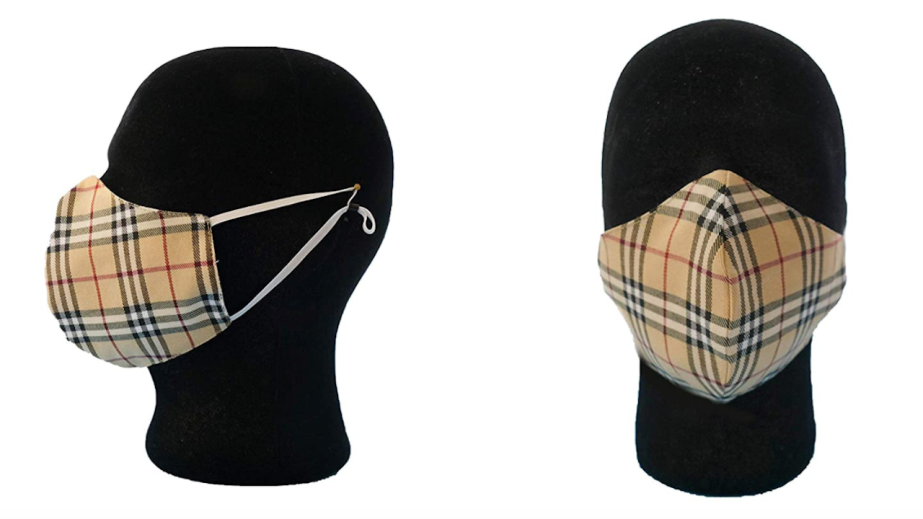 The rise of the fake designer mask

There’s been a mass influx of counterfeit face masks, emblazoned with the logos of prominent luxury brands like Gucci, Fendi and Burberry. Like other fakes, they proliferate on both smaller online stores and on some of the biggest marketplaces around, like Amazon. In June, New Orleans authorities seized more than 2,000 masks with designer logos that were being shipped into the city, and sites like Frill Masks openly sell masks with Fendi logo prints for $10. These masks, plastered with big Chanel logos and iconic Louis Vuitton prints, have been spotted on New Yorkers, in neighborhoods from SoHo and the Upper West Side.

On Amazon, a quick search of “designer masks” brings up a results page featuring a faux-Burberry mask that apes the brand’s signature tartan print. Most of the fake masks available out there sell for less than $20, and range from being covered in a print of the brand’s logo to using extremely similar patterns and aesthetics.

Counterfeits are common across categories, but Rania Sedhom, an attorney at Sedhom Law Group, said that the brazenness of fake masks comes from the fact that it’s a new category and there’s a lot of demand right now.

“Honestly, I just don’t think a lot of people are monitoring it right now,” Sedhom said. “It’s just as illegal as any other form of counterfeiting, obviously, but there’s just so much going on and brands don’t always have the bandwidth to track down every counterfeiter.”

These fake masks are also proliferating on Etsy, where hundreds of masks with Louis Vuitton and Chanel logos, among others, are available. They’re also showing up in Google search results. Incopro, a company that helps brands prevent counterfeiting, has been petitioning Google to do a better job with handling these flagrant counterfeits, but the search giant has been slow to move on it. Incopro estimated that more than 56% of traffic to counterfeit websites comes from Google Searches.

“Google can do more to prevent counterfeiting by removing search results for websites that lead consumers to counterfeits,” said Simon Baggs, Incopro CEO. “Google has previously said that trademark owners must [file a lawsuit] to combat listings by sites in organic search. Now, [as of June 11,] Google has shifted to say it will remove individual URLs for counterfeits that infringe on trademarks.”

Masks are particularly fraught, Sedhom said. It’s one thing to make a copy of an existing product, like a handbag, but for brands like Burberry which do not offer any branded face masks for purchase, a fake mask puts the brand’s name into a category it has no interest in being associated with.

And while big marketplaces like Amazon and Google have shown some interest in curbing counterfeits, there’s still much more to do. For example, Amazon still allows trademark bidding, the act of purchasing a brand’s name to use as a search term. It’s the reason that searching “Burberry” on Amazon can bring up obvious knockoffs, even though the word “Burberry” is never used in the product description. It’s a common tactic for counterfeiters on Amazon.

Amazon has made some attempts to curb counterfeits on its platform, including filing a joint lawsuit with Valentino against a counterfeiter and creating a Counterfeit Crimes Unit in June to crack down on counterfeits, but brands are still wary of Amazon due to the prevalence of fakes on the site. Amazon, Etsy and Google did not respond to requests for comment on this story.

The marketplaces can be slow to act on transgressions, giving counterfeiters the advantage of speed.

“Speed is always a strength of counterfeiters,” Sedhom said. “They can move quickly, and there’s such high demand right now for masks. It makes perfect sense that they would strike and go for high-profile brand names. It’s the way counterfeiting always works. Nothing has really changed except that it’s a new product now.”