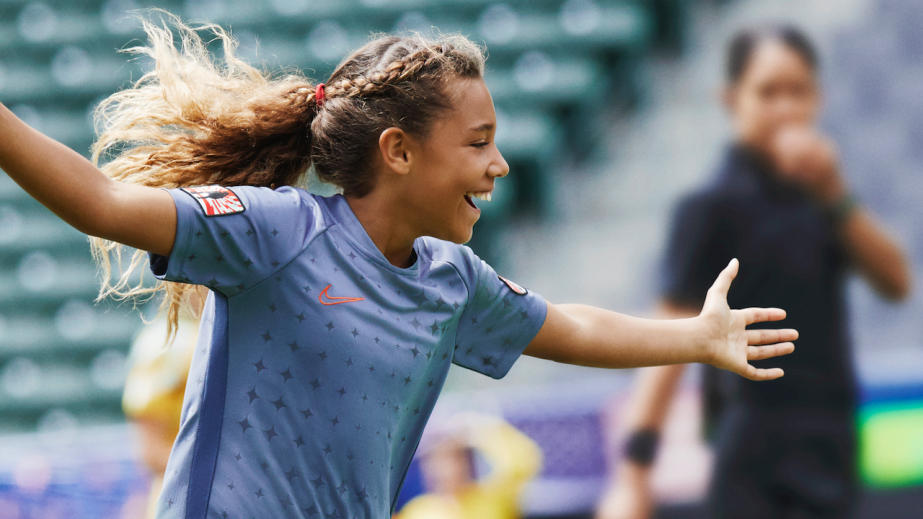 ‘The most underserved piece of the market’: Athletics brands are starting to expand their focus to girls

When Under Armour released in November 2018 Steph Curry’s latest sneaker, the Curry 5s, there was one problem. The shoes were sold in the boys’ department but not the girls’. It wasn’t until a 9-year-old girl wrote Curry a letter expressing her disappointment that she couldn’t purchase the sneakers that Curry and Under Armour moved smaller sizes of the shoe into UA’s girls’ section.

When it comes to sports apparel for girls, especially for traditionally male-dominated sports like football and basketball, the answer has typically been to take products created for boys and sell them in smaller sizes to girls, rather than producing products specifically for girls. It’s been the same in the footwear category, as well. There’s been a noticeable shift at a time when brands are doing all they can to show their support for women, in wake of the Me Too movement.

“It’s been about a decade now since Dove and other brands started to embrace female empowerment, but it was more of a marketing adage not a cultural change. What we are seeing now, I tack it to the Women’s March. That really sparked this notion that women should have their own lane and their own voice,” said Quynh Mai, founder and CEO of digital agency Moving Image & Content.

The assumption that girls don’t need basketball or baseball apparel is beginning to change, especially as Gen Z, with an estimated $44 billion in buying power, is growing up and making more of their own purchase decisions around what brands to buy and support. As a result, brands from Nike to Adidas are focusing more on how they can attract Gen-Z girls to their brands, outside of big-budget marketing campaigns filled with messages of female empowerment.

“’Girls’ is the most underserved piece of the market. There’s always been more sportswear available for boys, but there’s an opportunity there given the fact that parents are shopping with their kids. Parents want their kids to have a say and be involved in the shopping process,” said Alexis DeSalva, senior research analyst for retail and e-commerce at research firm Mintel. “There’s a big opportunity here for the brands like Nike and Under Amour to say, ‘Who is the underserved person here?’ And appeal in that regard.”

The key is in breaking down longstanding stigmas around what sports girls do and don’t play, Mad said.

“A lot of these brands really only focused on women’s fashion when it came to the more meditative sports:  yoga, cycling, those things. It was sexist. A lot of the collaborations, like Adidas and Stella McCartney, fell in the line of athleisure fashion apparel versus true workout apparel. A lot of these brands thought that women in more male-dominated, rigorous sports had no problem wearing men’s clothing. The erroneous assumption was that they were masculine anyway, which is unfortunate,” said Mai.

This year, while Nike has seen massive sales from its soccer jerseys, thanks in part to the Women’s World Cup, which also marked the first time that the brand designed a kids-only soccer jersey, created specifically for girls. The limited-edition “Dream Further” jersey was tied to the World Cup (it’s featured in one of the brand’s World Cup marketing campaigns, which shows a young girl wearing the jersey) and quickly sold out after launching in early June.

While the brand did not share how many of the “Dream Further” jerseys it made or sold, Nike chief executive Mark Parker said on the brand’s fourth-quarter earnings call that the USA Women’s home jersey was the top-selling soccer jersey, men’s or women’s, on nike.com in a single season. Overall jersey sales have increased 200% from 2015, driven by women’s soccer, he said.

“The World Cup is a tipping point, illustrating Nike’s commitment to grow the game of football, as well as Nike’s dedication to ensuring greater access to sport for kids and women,” a spokesperson for the brand said.

Adidas is also making moves into new sports territory for women and girls. In February, the brand worked with the NFL’s first female coach, Jen Welter, formerly of the Arizona Cardinals, on Adidas Made For Jen Welter (AM4JEN), a special-edition football cleat made for women. The brand did not sell those cleats, rather they were specially designed for Welter using 3D scans of her feet. Adidas promoted the partnership on Twitter and Instagram, while Welter promoted the news on her social channels. The brand also published the partnership on its company blog.

Currently, Adidas’ website carries several football cleats for kids that are listed under both the boys’ and girls’ categories online. However, there are no specific cleats designed for girls or for women. Adidas declined to comment on its strategy around football cleats for girls and women at this time.

While the announcement of Adidas’s special edition football cleat for women also came with news of a multi-year partnership with Welter designed to support girls in sports and develop more products for young girls, some experts find special launches like these to be more of a PR stunt as opposed to real product innovation.

“These brands aren’t prioritizing innovation in products on their shelves in the same way their ads portray female empowerment. After all, it took until now for Adidas to finally make a cleat designed specifically for female anatomy,” said Kelsey Wilkins, associate creative director at advertising agency M/H VCCP. “I don’t need a brand to tell me I should feel empowered, especially if it feels like it’s just latching on to a trend. I need a brand to prove they live this philosophy day in and day out.”

However, a lot of sports apparel brands use limited-edition products and special launches as a way to test the waters and learn how much demand there might be for those products, especially when entering new territory.

“Any brand or retailer is going to be cautious launching any kind of new line or new product or initiative too heavily,” said DeSalva. “It’s a smart way to start small and then scale, and we’re going to start seeing more of this. As awareness grows, so does interest and demand. You have to wait for the right moment, and I think these brands are probably doing these limited releases as a way to see if the demand is fully there yet.”