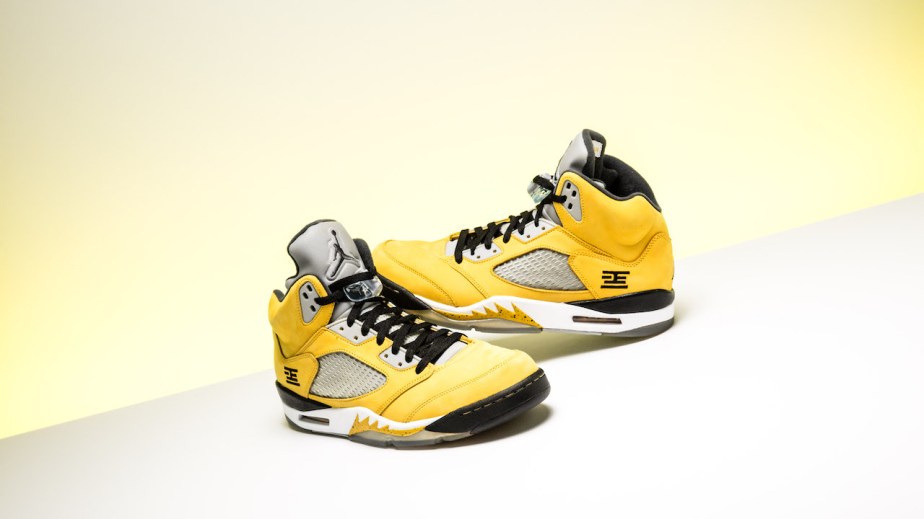 Less than a year after its big acquisition by luxury platform Farfetch, Stadium Goods is partnering with another huge name in the world of high-end luxury: Sotheby’s.

Beginning today and running until July 23, Sotheby’s will be running an online auction selling a collection of 100 ultra-rare sneakers from Stadium Goods’ collection, as well as hosting an exhibition at Sotheby’s New York gallery where consumers with rare sneakers like the Nike Moon Shoe or the Back to the Future sneakers. Sotheby’s will be taking its usual cut of the sales, 25% for anything sold for less than $400,000 and 20% for anything above.

Invitations were sent out in the form of a Stadium Goods T-shirt with the event details on it, and both entities are promoting it heavily on their respective Instagram accounts by posting photos of sneakers from the collection.

For Stadium Goods, selling these items through an auction is like sneaker resale coming full circle. As Stadium Goods co-founder John McPheters and others have said before, eBay was the birthplace of the modern sneaker resale world before platforms like GOAT, StockX and Stadium Goods began popping up. From the humble days of online bidding on eBay, sneakers are now being auctioned off at one of the most prestigious auction houses in the world.

“We have considered doing auctions ourselves, but it’s a very complicated business model,” McPheters said. “We are very happy with our model, which is to have items that are on hand and can ship to consumers right away — more of a traditional e-commerce model. We don’t see ourselves as being able to do auctions on our own. We needed the right partner.”

Sotheby’s embrace of sneaker resale is not new. The auction house, which did more than $5 billion in sales in 2018, has been slowly working more streetwear and skate pieces into its repertoire, including a collection of Supreme skateboard decks that sold in January for $800,000. Both entities are looking to build up audiences that the other has. For Sotheby’s, partnering with Stadium Goods will hopefully bring in a whole new generation of customers, said Noah Wunsch, Sotheby’s global head of e-commerce.

For Wunsch, the brand alignment between the two was a no-brainer, as he compared the way people collect sneakers to the way Sotheby’s customers collect fine art or lithographs.

“I see a cultural through-line [between Sotheby’s and sneaker resale platforms],” Wunsch said. “The art market has really evolved alongside street and skate culture. The way they’ve aligned in the last 20 years is remarkable. People like KAWS [a visual artist who frequently overlaps with streetwear] have played in both realms. One of the sneakers we have on sale is a Nike shoe designed with artist Tom Sachs. There are all these cultural through-lines here. Art and fashion are all intertwining into one big category.”

McPheters said that part of the appeal of partnering with Sotheby’s is the credibility the long-running institution brings. Selling sneakers and streetwear alongside fine art and other major investment pieces solidifies streetwear’s full absorption into the upper echelons of the luxury world.

“It’s a large, meaty conversation to be had around streetwear and luxury, but if you go back in time, these worlds were very separate,” McPheters said. “You had a luxury consumer, a handbag consumer, a watch consumer and you had sneakers consumers. These were buckets that were separate. But now there’s been such huge growth in both high fashion and streetwear, and they’ve come together so much. The consumers are not going to go back into those buckets. It’s a much more fluid beast now. We were backed by LVMH and then we were bought by Farfetch, so while Sotheby’s is a different partner in nature, it’s the same trajectory for us.”