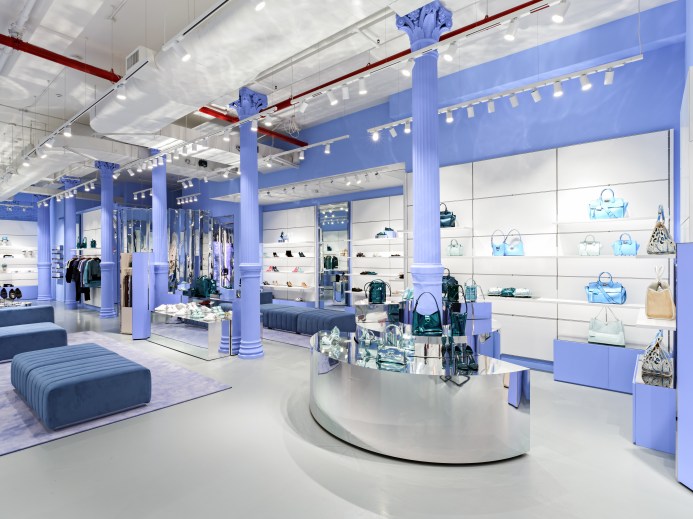 Getting into the sneaker space as a heritage brand has become easier, thanks to NFTs.

Luxury brands like Balmain see the digital territory as an intersection between web3 fans and those immersed in drop culture. Now, Salvatore Ferragamo, the Italian heritage brand known for its classic flats and pumps, is subverting its product range with a new store opening in New York and a sneaker drop focused on web3, digital artists and collaboration.

The company, which was created in 1928,  opened the 2,600-square-foot concept store located at 63 Greene Street on Friday. It features an immersive retail experience along with its first NFT collection. The opening coincided with the end of NFT.NYC, a web3 conference in New York where other fashion brands were also present.

“It’s been a goal of ours for a while to bring a younger audience into the Salvatore Ferragamo family, and SoHo’s cobblestone streets have long symbolized a distinctly youthful spirit. As a brand, we thrive on the inherent energy of New York’s downtown culture, so it’s a natural home for us,” said Daniella Vitale, chief brand officer at Salvatore Ferragamo. The modernized retail format and product offering are ways Salvatore Ferragamo hopes to stay on the pulse of the current interest in the metaverse. The brand has two other standalone stores in NYC, on Fifth Avenue and in the Brookfield Place shopping center in lower Manhattan.

Comparable luxury brands, like Louis Vuitton see their brick-and-mortar locations as exhibition spaces to develop the brand image just as much as sell products. “The SoHo concept store is defined by a distinctly modular approach to retail; it’s a fluid space that’s not as fixed as many of our other storefronts,” said Vitale. “When thinking of how to approach the design of the interior, it was crucial for us to create a flexible look and feel — something more akin to an art gallery or an exhibition center.”

The store has a number of experiential elements that were designed together with multidisciplinary studio DE-YAN, which has previously worked with Dior and Mac Cosmetics. These include an NFT booth created in partnership with digital artist Shxpir, a custom sneaker program, and a limited-edition capsule collection of T-shirts and sweatshirts featuring the artist’s graphic prints.

Shxpir began making digital art at university 15 years ago. Early on, his work was met with disdain from older artists and gallerists, and criticized for not being “real art” because “it can’t be hung on the wall,” according to the collaboration’s press release. Speaking of his signature style, he said, “Fake Art is for normal people to enjoy. Life is short. Loosen up, [and] have fun!”

The NFT booth is a unique retail feature that hasn’t been implemented before by other luxury brands. Customers enter the booth through a mirrored installation. They can then can choose from a selection of backdrops designed by Shxpir while being captured on a high-spec Blackmagic camera. The created artwork, limited to 256 individual NFTs with possible further expansion, can then be minted on the Ethereum blockchain via Opensea, with all minting fees covered in advance by Salvatore Ferragamo. All of the proceeds from the physical collaborative capsule collection will be donated directly to The Center, which is one of the oldest and leading LGBTQ+ organizations in New York City.

Talking about the NFT booth, Vitale was clear to note that the web3 space can be intimidating. “This is the first time a project like this, on the scale we’re doing it, will bring together a brand, an artist and their audiences to create completely personalizable digital artworks in a physical retail space,” she said. “This project has been conceptualized in a way that demystifies the system, and we’re there with you every step of the way. Even if you’re not experienced in NFTs or you don’t have a wallet, we’ll guide you through the steps required — and, crucially, we’ll cover all the costs associated with minting.”

The store also features a hologram sneaker creation station, where customers can customized their sneakers’ colorways and see the hologram sneakers in real-time before they’re saved and sent off to be manufactured. Holograms, which have been tested in changing rooms as a means to try-on clothes and have been used to replace a person by Ralph Lauren, haven’t had much success in the fashion industry. However, Salvatore Ferragamo wants to change that. “The customization aspect of the program is integral to how we see our audience engaging with the space,” said Vitale.” Here, the hologram creation unit allows visitors to completely personalize their pair of sneakers, offering an experience they can’t get anywhere else.”

Although sneakers may not be a typical product sold in Salvatore Ferragamo’s range, compared to Adidas or Nike, the hologram store integration shows that the brand wants to push further into sneaker culture. And, its web3-friendly format is meant to bring in the same community interested in sneakers and NFT’s driven by brands like Puma, Nike x RTFKT and Adidas — all three have launched NFTs in the last year.