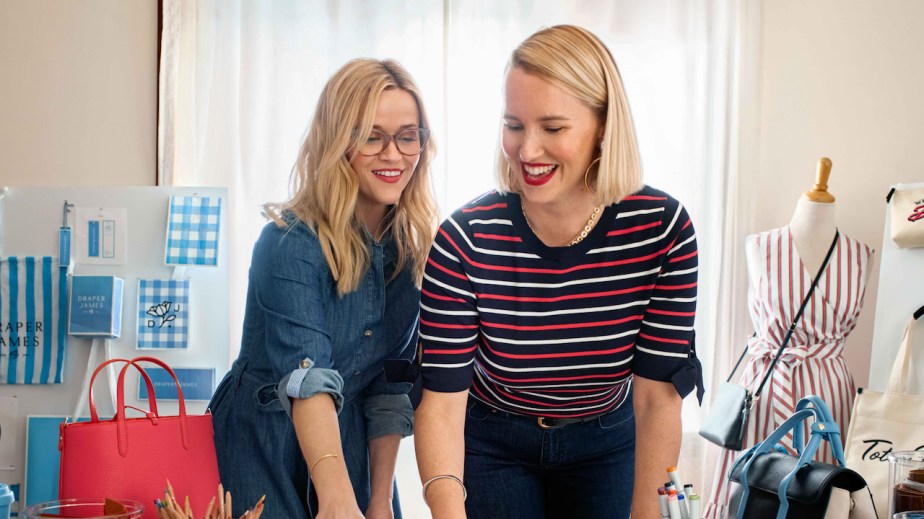 With the announcement on Monday of its new, industry-bred fashion designer, Reese Witherspoon-founded Draper James is on a mission to prove it’s not just another celebrity line.

The introduction of Kathryn Sukey, formerly senior design director at Kate Spade and handbag designer at Coach, reached Draper James customers on Monday morning across the brand’s communications channels, including email, social media and draperjames.com. The email featured a personal letter from Witherspoon along with a photo of her reviewing a table of sketches with Sukey. It linked to the brand’s new spring collection, made up of Sukey’s first styles for the brand.

“I’ve been working with our new head of design, Kathryn Sukey, to bring fresh prints and designs, and an incredible line of handbags to our spring 2019 collection,” the email read.

Sukey was approached by Draper James CEO Taylor Rettig while still working at Kate Spade, just over a year after Kate Spade was acquired by Tapestry (Coach, Inc. at the time). She joined the company in April, after presenting to Rettig and Witherspoon a proposal of her plans for the line in late 2017. Sukey said she saw the position as an opportunity to combine her experience in both ready-to-wear and handbags, particularly as Rettig and Witherspoon emphasized the desire to build out a leather goods assortment.

An image from the Draper James spring 2019 campaign

Sukey said her aim throughout the interview process was to prove she could take a collection from start to finish with limited direction. Rather than a flashy mood board, she decided to present a more logical business plan — complete with her vision of a dream design-team setup — that would be more comprehensible for non-designers. Her pitch centered on a move to a more robust assortment of styles, driven by a theme of “casual, feminine polish.“

“The brand had done an amazing job with the occasion side of the business and fit-and-flare dresses,” said Sukey. “But I wanted to explore the other facets of [the customer’s] life that we could dress her for, like going to the movies on the weekend.” Witherspoon felt the brand was ready for new life and a new chapter, and Sukey was confident she could do it in a way that felt authentic to the brand, she said.

New styles being introduced for spring include a range of graphic tees, denim and knitwear. For sales associates in Draper James’ four brick-and-mortar stores (in Nashville, Dallas, Atlanta and Lexington, Kentucky), Sukey and her team built a deck explaining the brand’s evolution.

Sukey called Witherspoon, who started the brand in 2015, a true collaborator. She said, at the beginning of each selling season, Witherspoon sends her images and descriptions of inspiring styles and design elements she’s seeing in stores, and in editorial images. Sukey then peppers those ideas into the collection to ensure Witherspoon’s point of view is clearly represented. She sends Witherspoon updates on the collection as it’s taking form, and when it’s complete, the two go through a deck of the included styles, fabrics and inspirations. The design team then applies Witherspoon’s edits.

Celebrities launching brands is nothing new. This year, particularly in beauty, it seems everyone with a recognizable name is coming out with their own take on a popular product, and consumers are taking the bait.

“We’ve seen more companies that are built around a celebrity persona,” said Matt Sargent, svp at business strategy and research company Magid. “Today’s consumers, particularly younger millennial consumers, want to be more connected with the brands they support; they want to know what a brand stands for. While that can be achieved through other methods, one of the more straightforward ways is to attach the brand to a celebrity persona.”

But as the space gets more crowded, bringing a designer to the forefront as a co-face of the brand, in the name of legitimizing it, may prove a smart strategy.

“A lot of celebrity brands are super-successful, but they’re more of a vanity project,” said Sukey. “For [Witherspoon], this is a serious retail endeavor; she built this company without her name on it for that reason. And now, we’re putting the message out there that we have more to say together.”

Draper James started as a direct-to-consumer brand, but linked with wholesale retailers starting with Nordstrom in May 2017. Its retail partners now include Stitch Fix, Rent the Runway and Dillard’s, the latter of which is its largest revenue driver. A company representative declined to share total revenue figures but said sales have nearly doubled in the past year.

Since Sukey joined Draper James, she has brought on two senior-level designers, including Helen Richardson-Hou on the ready-to-wear side and former colleague Adelaide Ackerson on the accessories side. She said, because of their collective experience, the design team has been able to take on more collaborations and product categories than in the past. Draper James’ collaboration with Crate & Barrel is still in swing, and more brand partnerships are set for the future. In addition, the brand will introduce its first collection of eyeglasses this spring.