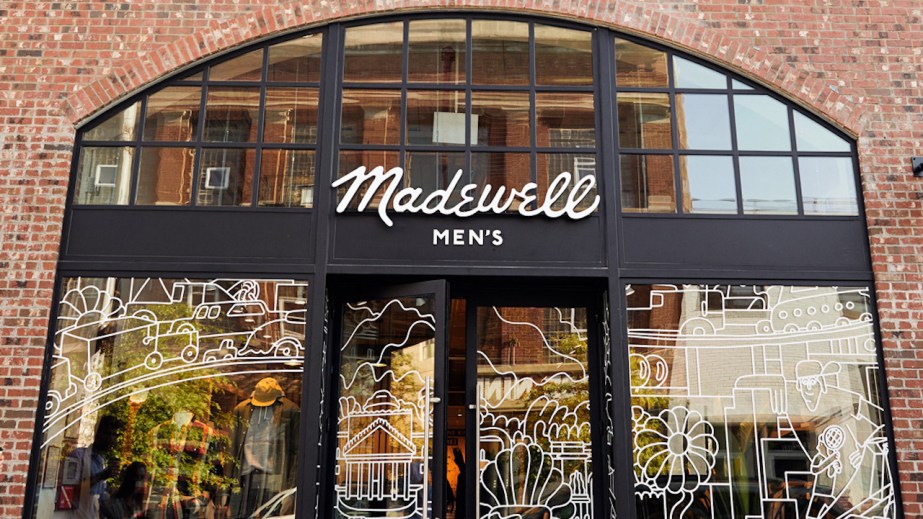 1 year in: Madewell doubles down on men’s with new collection and new stores

A little over a year ago, Madewell launched a small men’s collection made up of just a few pieces and sold online, in some Nordstrom stores and later in shop-in-shops within a few of its women’s stores. Now, the company is ready to fully take the plunge into the men’s category.

Last week, Madewell opened a pop-up shop in Williamsburg, Brooklyn, a block away from one of its women’s stores, dedicated entirely to men’s. Six other women’s stores have already gotten men’s shop-in-shops this month, in New York City, Philadelphia, Boston, DC, Los Angeles and Charleston. Previously, Madewell’s men’s styles were sold within one Madewell shop-in-shop, Nordstrom stores nationwide and on Madewell.com.

“In the first year, we’ve gotten a lot of great feedback from male customers on the way things fit, what they like and what they want to see more of,” said Joyce Lee, Madewell’s head of design. “Now that we are a year in, we have great information on sales and what’s resonating, which we can use to evolve the line.”

Lee said that before the men’s line launched, Madewell spent a few years researching and determining what a potential customer of Madewell men’s would want. They started with denim, seen as the core of the Madewell brand, and a few key staple pieces. This was driven in part by data the company collected showing that men tend to be much more loyal customers, finding a particular staple product they like and buying it again and again.

“Men, generally, are a little more straightforward in how they shop,” Lee said. “For women, they may want to see things styled and editorialized, but men can look at a pair of pants just laid out and they can see themselves wearing it. Women, again generally, shop thinking in whole outfits. Womenswear is more complicated, in general. There are more options in what you can wear. With our man, he’s looking for something he can come back to again and again. I think we’ve really found a white space where we can be that for them.”

Over the course of the first year, some things have changed, either to be emphasized more or tweaked. For one, Lee said that fit is just as important for men as it is for women, and that the inclusive sizing that Madewell has become known for needs to be applied to the men’s category, as well. Women’s styles are offered in sizes 000 to 24, men’s range from size 28 to 44. On the other hand, certain products that were outside the classic staple category, like a more adventurous quilted shirt-jacket, turned out to be among the best sellers of the first year.

The success of the first year has been driven in part by the overall explosion of men’s fashion. Multiple reports have shown men’s fashion outpacing women’s in growth for the past few years, even as it remains smaller overall.

“There’s definitely a big market for men’s fashion,” Lee said. “Everything is changing so quickly right now, but not a lot of brands are doing really good core stuff. We don’t do streetwear, but there’s so much happening there for men that we want to use our Labels We Love program to leverage that popularity.”

Labels We Love is Madewell’s program where it releases collaboratively designed products and sells existing product from other brands like Vans and Biltmore. Lee said the brand doesn’t have any men’s-specific collaborations lined up yet, but that will be a focus going forward. She did mention Dickies, a dual-gender brand that Madewell has collaborated with before on women’s, as an ideal partner for men’s as well.

Lee declined to offer exact sales or growth numbers for the men’s line, since the brand is in the midst of an IPO filing and is still in discussion with investors. But she did say that the growth and sales of the men’s line over the past year has been significant enough that the brand has full confidence in making it a major part of its business going forward.

Madewell has been on an impressive rise the past few years, with growth massively outpacing its parent company J. Crew, leading to a split between the two companies earlier this month (which was no surprise). The IPO is still in the early stages of discussion, though talks have slowed somewhat in the past week.

“Madewell, as of now, has the momentum — a well-defined identity, a brand that is resonating with consumers, a distinct focused customer segment and products people are in love with,” said Mike Stevens, executive director of strategic planning and account services at marketing agency GYK Antler. “All of this has helped to fuel its growth. Combine that with its launch of a men’s line and its future looks bright.”

While last year’s launch saw the majority of Madewell men’s being sold at Nordstrom, the brand is now making an effort to bring men’s into more of its own stores. After the first year and with the data it has gathered from customers, Lee said the brand feels more confident than ever that men’s is more than just an experiment.

“We would love for this to become a permanent men’s store after the year is up,” Lee said of the pop-up. “It’s such an exciting time for the brand to see the feedback and see how people are responding. I’m really feeling like [the men’s store is] here to stay.”