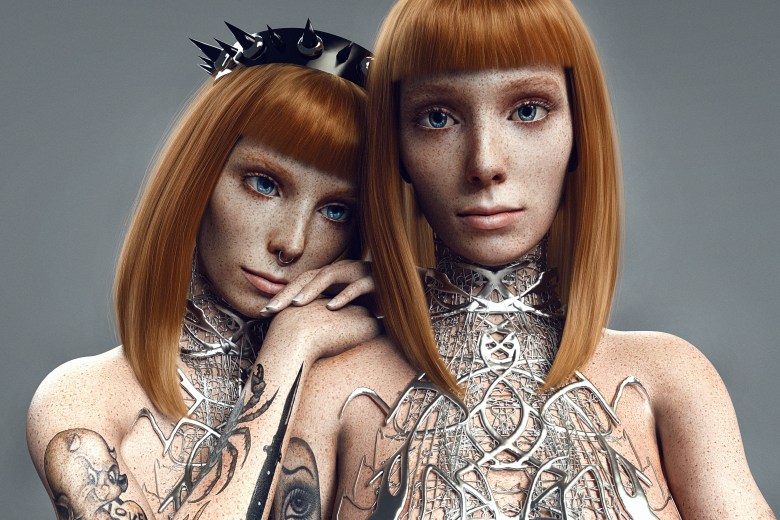 On Wednesday, L.A.-based modeling agency Photogenics launched a dedicated avatar division, centered on model-created avatars for use in shoots, drops, wearables, events and modeling jobs in the metaverse.

Founded by former model Nicole Bordeaux and Smashbox’s co-founders, Dean and Davis Factor, Photogenics will initially work with 13 models, including Sedona Legge, Milan Dixon, Dasha Nguyen and The Fly Twins, to bring their avatars to the metaverse. The photorealistic avatars will be created by metaverse pioneer Nina Hawkins and 3D filmmaker Sage Morei. The process consists of taking scans of a model’s face using a digital camera, then uploading them into an algorithm that creates 3D shapes from the pictures. The avatars are then sculpted, fine-tuned and exported with an internal skeleton, ready for use in animation in any digital project.

The project is the first of its kind in modeling and brings dedicated support from the agency, including around contracts, to help models navigate the new opportunities for visual representation in the metaverse. While some companies, like fit technology company Bods, see a need for virtual models in assisting online clothing shoppers with finding their perfect fit, Photogenics is hoping its avatars will do more than just model garments online. As Photogenics’ avatars will be able to display the models’ personalities and interests, they can also be advocates for social causes, the company hopes.

Australian model Sedona Legge is one of the first models to be part of Photogenics’ avatar division. Similar to the way digital influencers like Shudu and Lil Miquela have become influencers without a physical presence, Legge hopes her avatar can be a strong advocate for the causes she supports and show different parts of her personality.

“I love the idea of being one of the first fashion models to venture into this realm, but I also have a strong belief that IRL modeling can never be replaced,” she said. “The [two concepts] will co-exist, side by side, with their own specific applications. And this will be a method for me to lengthen my modeling career and experiment with my avatar in a whole new world.”

One of the benefits of these digital models is that their physical appearance can be controlled. Depending on the brand or project, an avatar’s style and age can either change over time, in line with their physical counterparts, or remain the same. As the fashion industry delves deeper into avatars and sees the benefits of using digital models, such as savings on shoot costs and travel, avatars may become the default. This initiative could also increase the revenue models can make for IRL modeling.

“By creating the models’ alter egos and a more accessible version of themselves, the in-person version of the model becomes rarer. Brands will pay higher rates for the live model, similar to a musician when you buy their records or see them live in concert,” said Nicole Bordeaux, co-founder of Photogenics. In the next few years, brands will be able to choose if they want to use a digital model or pay more for the real one, accounting for in-person costs and restrictions that may continue post-pandemic.

Top fashion models in the world are already seeing the potential in the digital space. Bella Hadid, Irina Shayk and Kendall Jenner have worked with brands like Mugler and Burberry to create one-off digital avatars of themselves. In addition, last month, Bella Hadid released an NFT collection of herself, titled CY-B3LLA, as another way for her fans to connect with her.

“Brands will be able to use our photorealistic avatars to promote their products. We’re building this database of model avatars that clients can book to promote their NFT clothing or walk in their virtual runway shows, whether that’s Dior, Gucci, whoever,” said Davis Factor, founder of Smashbox Cosmetics and Studios and co-founder of Photogenics.

According to Bordeaux, the division will not stop at avatars. “We have high ambitions for the division, and we hope to expand our roster and include AI,” she said. “Additionally, we could be successful in the NFT space and create a ‘modeltopia’ that holds events and gatherings. We also feel we can now focus on brand collaborations, collections and drops. Gaming is next.”