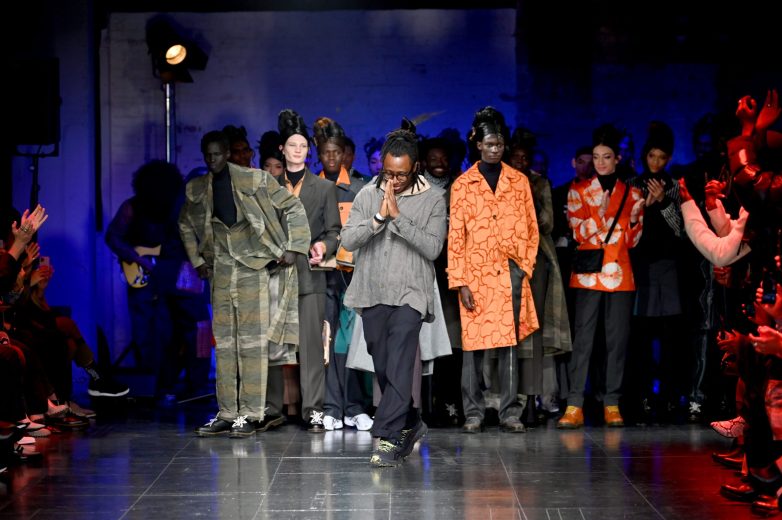 London’s first full fashion week schedule since March 2020 coincided with the lifting of Covid restrictions in the country and a flurry of storms in the capital. The highlights came from younger brands like Conner Ives, Labrum London and Edward Crutchley, who took to performances to highlight their collections. And the collections shown were full of nostalgia, storytelling and references to brand values.

Notably, some of the biggest names in British fashion were absent from the lineup, including Burberry, Victoria Beckham, Christopher Kane, Mulberry and Alexander McQueen. After a two-year hiatus, Burberry will be returning to the live runway format for fall 2022, with a standalone show on March 11 in London. Victoria Beckham made an appearance at the Supriya Lele show, but has not disclosed when or how she will be revealing her next collection. Christopher Kane opted for a digital fashion film, and Mulberry partnered with LVMH to support Richard Malone in his collection but has not announced a show of its own. Meanwhile, Alexander McQueen is showing the brand’s collection in New York on March 15. The lack of star power did have an impact on the number of international buyers and media attending the shows, as did the seating restrictions for runway shows.

The Conner Ives show was a highlight of the week, with the designer delving into American fashion archetypes inspired by his youth in New York’s Hudson Valley. Edie Campbell and Paloma Elsesser both walked the runway, showing that younger brands are attracting high-profile models for their shows and also prioritizing body and race representation.

London Fashion Week’s sponsor Clearpay has seen the event reimagined since the beginning of its partnership in February of 2021. This season, the focus was on bringing LFW to the largest audience possible while maintaining exclusivity. Talking about the company’s partnerships with London Fashion Week and with womenswear label Roksanda on its NFT project, Clearpay co-founder and CEO Nick Molnar said, “Accessibility and innovation are core to any activity or partnership that we formed around fashion week in London, and we have always been deeply committed to supporting the British retail industry. Creating something truly unique that allows a wider audience to have access to an iconic British designer’s collection just feels right to us.”

Labrum London, another young brand, debuted a well-executed collection with the help of i-D stylist Ib Kamara that featured a performance from a choir and spoken poetry. Talking about LFW, creative director Foday Dumbuya said London’s diversity brings a different energy to the shows and style. “Everyone makes an effort and has such an individual style, and that sets it apart from other cities. It’s a hub for emerging talent, and there are a lot of great designers coming from here at the moment. Labrum is fundamentally about celebrating West African and Black history. Without these stories, there cannot be a collection.”

The Conner Ives show featured a partnership with Wandler for the shows. Similarly, Fashion East menswear designer Jawara Alleyne linked with Dr. Martens, Matty Bovan collaborated with Ugg and Edward Crutchley worked with Roker. Partnering with younger designers can pave the way for collaborations, which have become popular among footwear brands aiming to diversify their collections.

A number of featured brands, including Ahluwalia and Conner Ives, focused on the lateral business model, using upcycled fabrics and clothing already in production to create their collections. Other newness included the introduction of NFTs and digital fashion, which were also present at New York Fashion Week. Roksanda Ilincic partnered with Fashion Week sponsor Clearpay and The Institute of Digital Fashion on a limited run NFT, while Edward Crutchley worked with body-mapping platform Zero10 to create the world’s most accurate representation of real-world designer items in the metaverse.

Talking about the collection, Crutchley said, “I have worked with 3D rendering in the past, but [Zero10’s] expertise and commitment to digital craft really took the process to the next level. This is how fashion will exist, with digital and physical fashion being equally valid as the artisan craft of the future”.

Multiple brands incorporated performances into their presentations, from Richard Quinn’s inclusion of the London Chamber Orchestra to Sam Smith’s performance at the presentation of Harris Reed, one of the capital’s rising art school stars. A number of designers looked to the 1920s and ’30s: Vintage-inspired Rixo balanced champagne towers, dance performances and sequins for its presentation, and Erdem delved into Berlin’s arts scene with a moody spotlight on a solo pianist playing in the middle of the catwalk.

Savile Row designer Ozwald Boateng, who held the role of creative director at Givenchy Homme from 2003-2007, returned to London to showcase his collection after 12 years. His performance-based show featured the designer’s celebration of Black history and design, with a video montage of Black figures of excellence like novelist Toni Morrison and supermodel Naomi Campbell. The show wrapped up with a choir and dance celebration on the stage, as well as an appearance by actor and producer Idris Elba and music artists Pa Salieu, Dizzee Rascal and Goldie. These performance-led elements track well on social media, especially with their hyper-local focus on London’s arts and music scene, which is deeply entwined into the fashion scene.

According to initial figures from marketing platform Launchmetrics, the LFW brand ranking, based on media impact value [MIV], placed Irish designer Simone Rocha first, followed by the Dark Couture show from Richard Quinn. Next came LVMH prize winner Nensi Dojaka, followed by 1930s-inspired Erdem and Vivienne Westwood, with its tiger-infused fall show. The total media impact value for the week amounted to $33.7 million, with social media accounting for $17.2 million of that and online press coverage for $16.5 million.

A 2021 report published by Oxford Economics for Creative England (now Creative UK) and the Creative Industries Federation found that the local creative sector could recover from the pandemic faster than the U.K. economy as a whole, if partnered with the right investment. It estimated that the creative sector could grow by more than 26% in the subsequent four years, until 2025, which would contribute around £132.1 billion ($180 billion) to the U.K. economy.