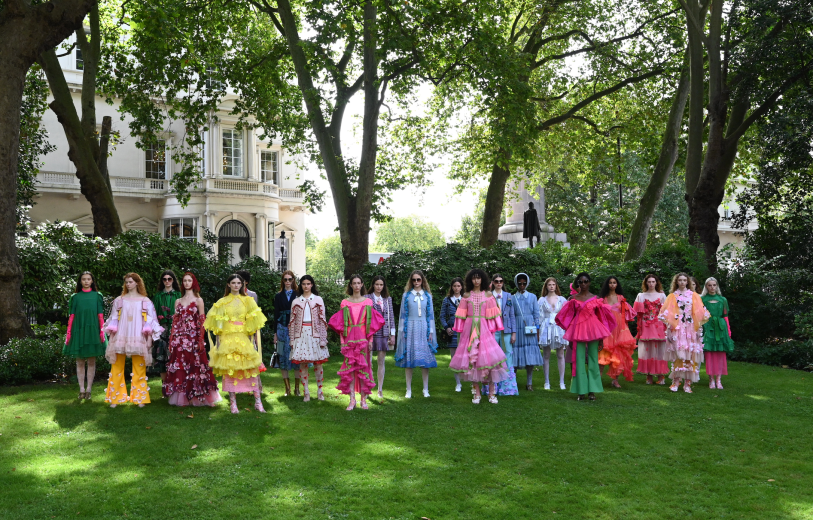 As the sun set on the digital-physical hybrid London Fashion Week 2022, the British Fashion Council’s Institute of Positive Fashion issued a new report aimed at moving the British fashion industry toward a circular model. While circularity did come up in the LFW collections from younger designers like Harris Reed and Osman Yousefzada, it certainly did not make enough of a splash.

The IPF report outlined the need for three target outcomes: a focus away from buying new garments, a reinvigoration of circular fashion as a result of ‘underutilized’ clothing, and the further development of emerging fiber-to-fiber technologies. With the increased focus on Britain’s role as host for the COP26, the British fashion industry’s role in the drive for circularity is more important than ever.

Britain is home to one of the biggest fashion industries in the world. It employs 890,000 workers and creates revenue of £118 billion. Even during the pandemic, British shoppers spent £54 billion on clothes last year. With many of these purchasing decisions coming from garments inspired by those at London Fashion Week, the designer engagement with circularity fell short of the high expectations set during the pandemic.

In terms of trends, London Fashion Week 2021 fell equally into two camps. There were the sporty, slightly sexy and freeing clothes exhibited by designers like Rejina Pyo, Halpern, and blazing newcomer and LVMH prize winner Nensi Dojaka. But there were also those inspired by the return of fashion clothes and bedroom gowns, like Edward Crutchley and Simone Rocha. Sarah Ashman, global CEO of London-based brand consultancy Wolff Ollins, said, “This year has been a bit different, because it’s the first time we’ve had an IRL fashion week for a while. It’s a bit like having a party after no one’s been able to go out for a long time.”

Rejina Pyo’s collection showed that this year’s Japan Olympics are still influencing designers, with GB divers modeling her looks before diving into the pool. Following the theme, David Koma also showed his collection at the London Aquatics Centre. Just as fashion has become more used to working in a hybrid space, clothes are adapting to existing within a world where the couch is as popular a go-to as the office. According to consumer habits, sportswear is becoming a natural extension of workwear, and designers are creating their collections with this in mind. Companies like Stitch Fix are categorizing this new workwear as “business comfort.”

Other designers like Simone Rocha, Bora Aksu and Molly Goddard focused their gowns toward the bedroom and motherhood. Starting the design process at eight months pregnant, Goddard took to her early collections and her children dressing up as inspirations, which resulted in a lineup of oversized gowns shown paired with ballet flats and denim. Simone Rocha incorporated nursing bras and adorned her frothy gowns with porcelain baby teeth, focusing on the ceremonial aspects of childhood. Included were grown-up takes on the large collars from the berries-and-cream trend that took over TikTok this month.

Finally, designers like Harris Reed who has dressed Harry Styles and Osman Yousefzada, embraced the circular proposition wholeheartedly, with Reed working with Oxfam to rework its bridal donations for their new collection. Yousefzada debuted his work with Tencel Luxe, a new silk-like biodegradable filament, while continuing on with his ultra-sustainable Last Yards concept and creating designs made from deadstock materials.

“These biodegradable filaments aren’t irrigated, but [instead] grown naturally using rainfall and then replenished for other trees to grow in cycles,” he said. “Coming out of a pandemic world, everyone was going back to normal gear. The pandemic very much affected me. All of these companies have made such big claims on sustainability, on inclusion. Now you are seeing exclusivity and the same narratives as before. My creative starting point was, ‘What happened to last season’s collection? Do we need to consume all of these clothes?’”