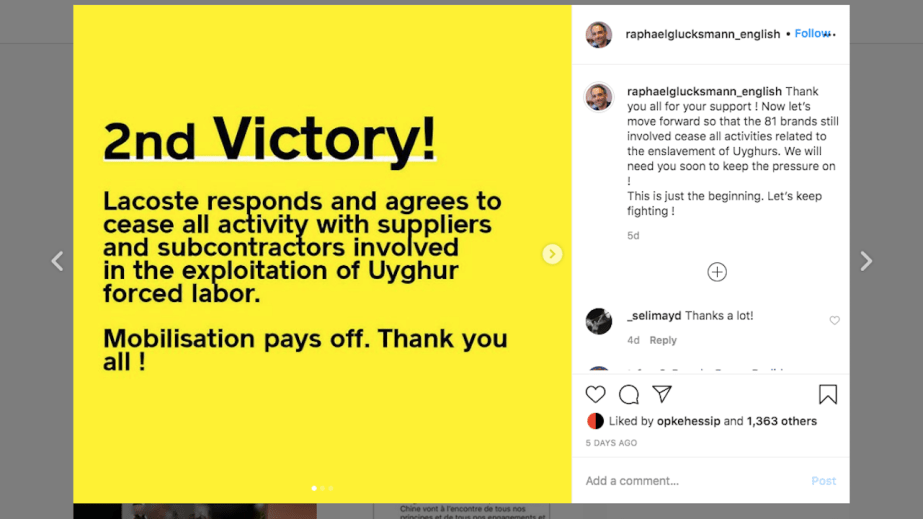 As a growing body of research connects China’s forced detention of Uighurs to the supply chain of the world’s largest fashion companies, a new campaign to pressure brands to end ties with factories connected to forced labor is gaining momentum.

On June 27, Lacoste became the second brand, following Adidas, to “agree to cease all activity with suppliers and subcontractors” implicated in a recent report exposing forced Uighur labor. The campaign, which was started by EU Parliament member Raphaël Glucksmann, is directed at 83 companies named to be directly or indirectly benefiting from forced labor based on a March 2020 report by the Australian government-funded think tank, the Australia Strategic Policy Institute. An estimated 1 to 2 million Uighurs, a Turkic-speaking Muslim group based primarily in China’s Xinjiang province, have been subject to mass detention in Xinjiang. Recent reports have stated that Uighur women are being subjected to compulsory sterilizations, abortions and birth control, a practice which Uighur exile groups say falls under the UN definition of genocide.

While earlier investigations have found links to cotton sourced from Xinjiang, the ASPI report centers around the transfer of Uighur victims of mass detention from Xinjiang to factories across China that are part of the supply chain of these major multinational corporations. Some of the largest companies in the world were named by the ASPI, including Apple, Mercedes-Benz and a sweeping number of international fashion brands including Lacoste, Adidas, Abercrombie & Fitch, Calvin Klein, Carter’s, Cerruti 1881, Fila, Gap, H&M, Jack & Jones, L.L.Bean, Nike, The North Face, Ralph Lauren, Puma, Skechers, Tommy Hilfiger, Uniqlo, Victoria’s Secret, Zara and Zegna.

Fashion brands have become increasingly involved in activism over the years, especially with regard to the Black Lives Matter movement starting in late May, which was led by Nike. But they have been conspicuously quiet about the camps in Xinjiang, which the Chinese government claims are “voluntary.” Foreign brands that do not support the Chinese government’s stance on issues have been known to receive penalties to their business in China, a fact which was highlighted with the NBA incident last year.

“While many international brands now understand that doing business in China’s Xinjiang region means effectively endorsing human rights abuses there and have pulled out, our report revealed that the forced labor issue is not just confined to Xinjiang,” said Kelsey Munro, a senior analyst at ASPI. “Manufacturers across China are using at least tens, likely hundreds of thousands of Uighur workers under state-sponsored labor transfer programs, in conditions that appear in many cases to be forced labor.”

According to Glucksmann’s Instagram, he met with Adidas and received a signed letter from the brand agreeing to the terms of the campaign on June 19. The ASPI report states that Adidas and several other major fashion brands were long-term customers of the Huafu Top Dyed Melange Yarn Co. Ltd. in Anhui, to which Uighur workers were transferred between April 2017 and June 2018. Glucksmann did not respond to a request for comment.

An Adidas spokesperson told Glossy via email, “The Adidas workplace standards strictly prohibit all forms of forced and prison labor and are applicable to all companies across our supply chain,” and said that it “explicitly instructed our suppliers not to source any yarn from the Xinjiang region,” referring to an earlier Wall Street Journal investigation that found many multinational brands had Xinjiang-sourced cotton in their supply chain. The report notes that Adidas and Abercrombie & Fitch said they had stopped using Huafu as a supplier. Other long-term customers listed were Lacoste, Puma, Zara, H&M and Victoria’s Secret.

Lacoste was also listed in the report as being supplied by Youngor Textile Holdings, which the report said also received transferred workers to its Anhui factory and owns subsidiaries and factories in Xinjiang. The report says that “Youngor’s Xinjiang company claims to supply Calvin Klein, Gap, Jack & Jones, Lacoste, L.L.Bean, Marks & Spencer, Polo Ralph Lauren, Tommy Hilfiger and Uniqlo,” while the Youngor official website claims it has partnerships with Cerruti 1881 and Zegna.

According to Glucksmann’s campaign announcement, Lacoste will cease all activities with suppliers and subcontractors involved in the exploitation of Uighur forced workers, make all of its efforts public and conduct due diligence among its entire production chain in China. Lacoste did not reply to a request for comment.

Glucksmann also stated on his Instagram account that he met with Nike to discuss the issue. Nike is listed in the report as a customer of multiple factories said to have received transferred Uighurs, including Haoyuanpeng Garment Group, Qingdao Jifa Huajin Garment Co. Ltd and Qingdao Taekwang Shoes Co. Ltd. In an Instagram post, he said that “discussions got intense” with Nike representatives when discussing the Taekwang factory, and that “Nike has promised a written response.”

Following the publication of the report, Nike released a statement in March saying that it has been conducting due diligence in China. It said, “Taekwang stopped recruiting new employees from XUAR [Xinjiang Uighur Autonomous Region] to its Qingdao facility in 2019 and has confirmed that all remaining employees from XUAR have returned home. Taekwang has also confirmed that all of their employees, including those from XUAR, have always had the ability to end their contracts at any time without repercussion, and historically many have chosen to do so.”

But the ASPI’s findings state that this is unlikely. “We found that many Uighur workers in these factories outside Xinjiang are facing conditions akin to the detention centers: constant surveillance, minders, restricted freedom of movement and political indoctrination classes,”  said Munro. “So brands manufacturing in China that think they are free of forced labor risk because they’re not involved in Xinjiang need to think again.”

Some brands’ audit systems rely on their suppliers’ word. Victoria’s Secret parent company L Brands said in a statement to Glossy that it has “required all of our suppliers to re-certify that they have received, read and understand our no forced labor policy, including the prohibition on the use of cotton from Xinjiang Uighur Autonomous Region, and any other form of forced labor.”

For human rights activists focused on the issue of mass detentions in Xinjiang, auditing a supply chain is not enough when it comes to manufacturing in China.

“It’s not like you stop using forced labor and you are good,” said Zulhumar Isaac, a human rights activist who has been vocal about the situation after her parents were detained in camps. “It’s just not like that. They should just dump China out of their supply chain anyway. It’s not only because there’s Uighur forced labor in their Chinese supply chain, but also because of the Hong Kong situation; because China is just not a good business partner.”

An H&M spokesperson told Glossy via email, “H&M Group strictly prohibits forced labor and any form of discrimination in our supply chain … We have conducted an investigation at all the garment manufacturing factories we work with in China and can conclude that none of them are employing workers from Xinjiang through what is reported on as labor transfer programs or employment schemes.”

A Puma spokesperson also told Glossy via email that its audit program did not find forced labor or connections to Xinjiang in its Tier 1 and Tier 2 suppliers. “In terms of raw material suppliers (Tier 3), we are sourcing yarn from a supplier, who has links into Xinjiang Province, but Puma is only sourcing yarn from the supplier’s spinning factory in Zhejiang Province and a spinning factory in Vietnam, just outside of Ho Chi Minh City,” said the statement.

A Jack & Jones spokesperson provided the sourcing policy of its parent company Bestseller, which bans production in Xinjiang and says it is conducting “due diligence” and is a member of the Better Cotton Initiative for cotton sourcing.

Other brands stating they utilize BCI guidelines include Puma and H&M.

Gap’s official statement on Xinjiang says it does not source from Xinjiang, it is “taking steps to better understand how our global supply chain may be indirectly impacted” and has “strict policies” against involuntary labor.

The BCI does not ban asourcing cotton from Xinjiang, but says it bans forced labor among distributors with its “Better Cotton” license. Regarding Huafu, which is a member of BCI, the organization states on its site that Huafu “commissioned an independent social compliance audit at their Aksu facility in Xinjiang” and “shared the results of the audit with BCI and with their customers,” claiming it did not find evidence of forced labor. The BCI did not address the Anhui facility.

Update 7/7/2020; 2:56 PM EST: A spokesperson from Abercrombie & Fitch stated “we do not believe we source from” two additional factories listed as its suppliers in the report, Shandong Zoucheng Guosheng and Qingdao Jifa Huajin Garment
Co. Ltd. The spokesperson also stated that team members “closely monitor our network of suppliers” and the company’s vendor code of conduct does not tolerate forced labor.