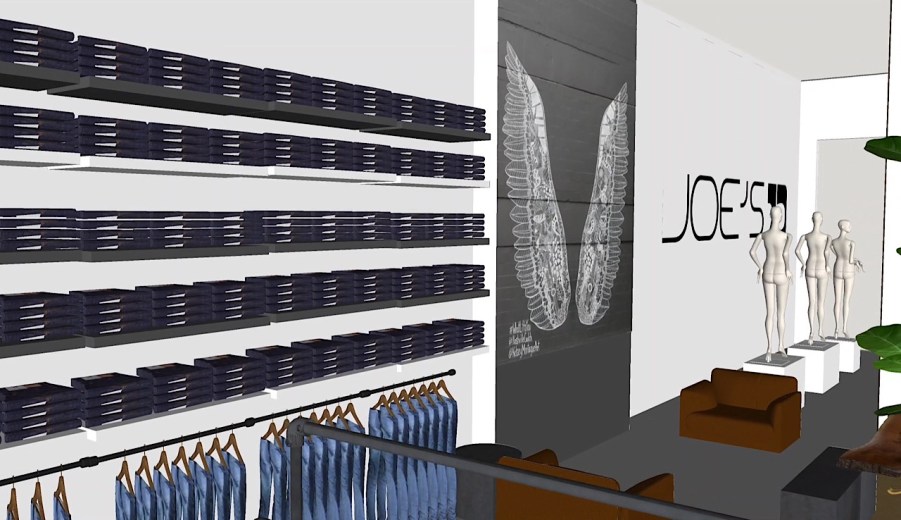 Joe’s Jeans looks to bounce back with new SoHo flagship

Joe’s Jeans is attempting a comeback with the opening of a new flagship store in SoHo in the first week of February. Situated just a few doors down from the former flagship, the new store will jettison much of the bloat and excess of the previous iteration in favor of a smaller footprint, a more minimalist aesthetic and, most importantly, a focus on the kinds of experiential in-store efforts that are the new standard in fashion retail.

“It’s important for us to be in SoHo,” Morrow said. “We are an L.A. brand, but New York is important to us. We saw that once we closed Soho for a couple of months, our online customer didn’t shop as much. They weren’t seeing us, and so they forgot about us.”

The new store will feature a collaborative piece by artist Collette Miller, who created the famous Angel Wings art piece in Los Angeles. Miller will paint a pair of angel wings on the interior wall of the store where customers can take their photo for sharing on Instagram. A pair of baby angel wings was also commissioned for the kids’ section. Morrow said more installations and influencer collaborations are on the way, with the next being the launch of a high-waisted jean designed by influencer Danielle Bernstein of WeWoreWhat in March.

“We decided that, to open, we would [need to] do more experiences,” Morrow said. “So we’ll have less inventory. At our old store, we had almost too much space — there were these big, bulky tables full of jeans all around, which we really didn’t need. The clean aesthetic makes it much easier for people to shop. We don’t have to carry all of our core products. The small square footage works with all of the goals we have for the location.”

The brand is being cautious: Less square footage and less product means less overhead and easier operations, said Morrow. In Los Angeles, Joe’s Jeans is looking for a location for another new flagship, which should not be “too huge,” she said.

In 2014, Joe’s Jeans was in a bad place. The brand had just failed to meet the minimum earnings requirement for a loan and was in debt for nearly $94 million. In 2015, the brand was forced to sell off $80 million in assets in order to pay off that debt, severely shaking up the business on an internal level.

The next year was not much better. According to Euromonitor, sales of premium jeans like the kind offered by Joe’s Jeans fell by nearly 10 percent in 2016, as consumer interest shifted toward online brands. In July of 2018, the company closed its flagship store in SoHo due to the costs of upkeep, according to Jenny Holmes Morrow, Joe’s Jeans’ vice president of retail.

“I’ve been with Joe’s for three years,” Morrow said. “The brand has been kind of rundown. We went through almost bankruptcy a few years ago, then we spent a lot of time trying to understand who the Joe’s customer is. Everything is changing so quickly in retail, so we are doing something with a much cleaner aesthetic so we can start doing activations and collaborations, and create content-driven commerce — not something that is just transaction-based.”

For Morrow, there was a bit of anxiety in between closing the original SoHo store in July of last year and opening the new one now. It makes sense, said Jeff Cheal, director of product strategy for personalization, campaign and analytics at retail analytics company Episerver.

“In-store experiences are great, but ultimately, it comes down to product differentiation and recency bias,” he said. “Everyone does influencers, everyone is doing experiential. That on its own is not enough to stand out. Luckily, Joe’s Jeans has a great product, but they still have to combat that recency bias if they’ve been gone too long. Brand loyalty is so short-lived these days.”

In the retail category, across 13 stores (excluding online sales), 11 of which are outlets, Joe’s Jeans takes in around $14 million per year, according to Morrow. For comparison, one of Joe’s Jeans’ former biggest competitors, True Religion, took in $273 million in wholesale revenue in 2017.