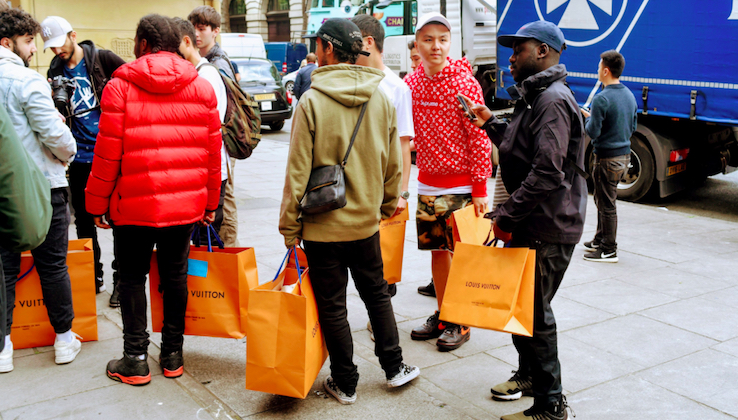 ‘It doesn’t mean what it used to’: How the term ‘streetwear’ has been overused to the point of meaninglessness

Streetwear is a malleable term. Nearly everyone in the fashion industry has their own definition and some have even argued that the term itself has become completely meaningless from overuse. Appropriately, there has been an increase in brands slapping the term onto any type of merchandise as a way to build buzz.

Take for instance, Jaja Tequila, a beverage brand founded by FuckJerry founder Elliot Tebele. It recently announced that it was branching into streetwear by selling three colorways of hats, hoodies, beanies and t-shirts on JajaTequila.com. Kentucky Fried Chicken, too, announced in November that it was launching streetwear with the debut of a small collection of accessories and clothes, designed in collaboration with Bape founder Nigo and his brand Human Made. And millennial hotspot Cha Cha Matcha released two streetwear-inspired products after a successful Nike collaboration in December.

“Applying the term ‘streetwear’ to what is essentially a promotional item is a reflection of how the term has been bastardized every which way possible,” said Ryan Babenzien, founder of premium sneaker brand Greats. “It’s clearly lost all of the meaning of what it originally meant.”

Matthew Williams, founder of 1017 Alyx 9SM, agreed. “I think it has to have some relationship to a subculture — at least it originally did,” he said.

Beginning in the late 1980s, streetwear referred to the types of clothes worn by members of various subcultures. Many of the powerhouse streetwear brands, like Supreme and Stussy, started as skate or surf shops. Streetwear legend Bobby Hundreds maintained that it is the distribution model, meaning the popular “drop” model or other limited-edition releases, along with a subculture connection, that defined streetwear.

For many of streetwear’s original guard, the term has increasingly lost its utility. Kim Jones, artistic director at Dior Men’s, famously said that he thinks the term should be retired. “[You] wear clothes in the street, so everything’s streetwear. You can wear a couture gown down the street and that turns it into streetwear,” he told Highsnobiety.

But for some, worrying too much about the definition of streetwear is a waste of time. “Streetwear as a thing is fading or losing its cool? Let’s just not give a damn. Leave it alone,” said Chris Paradysz, global chief growth officer at digital marketing firm ForwardPMX. “Streetwear is ageless and timeless, and happened because it needed to.”

The intersection of streetwear and luxury is one of the more common talking points around streetwear in fashion today, but that too comes with some complicated questions about the definition of streetwear. “I understand the appeal of using the term, but streetwear was built by and for people who didn’t have luxury money,” said Babenzien. “Now it’s being tied to Louis Vuitton. By definition, streetwear is not luxury priced. So $150 dollar for a t-shirt — I don’t know what that is, but it’s not streetwear. Just because people say something is streetwear doesn’t mean it is.”