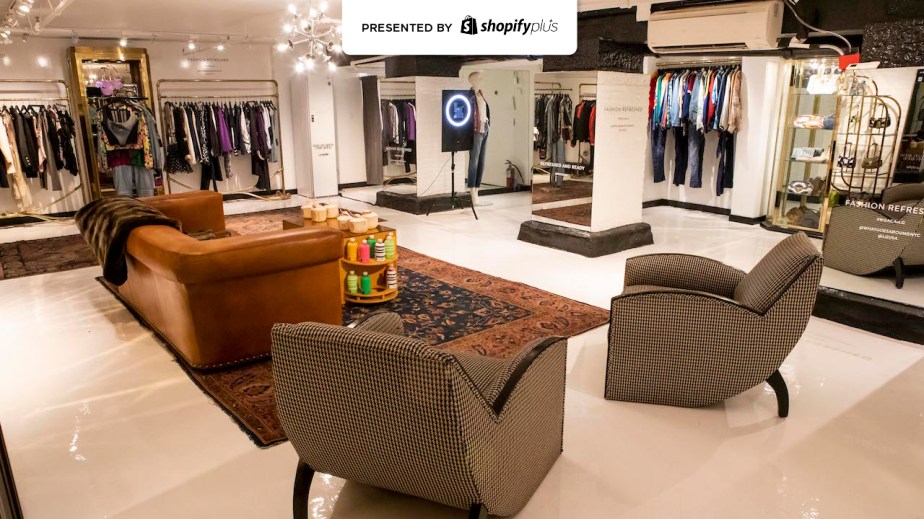 In order to stand out during the ever-bustling New York Fashion Week, NYC-based luxury resale boutique What Goes Around Comes Around (WGACA) has made a habit of focusing its marketing budget for the year around the event, with a focus on influencer partnerships. Sponsored by Shopify Plus.

For the past three New York Fashion Week events, WGACA has styled between 50 and 60 influencers, as well as VIP clients attending events and shows. This season, the mission is to also get industry insiders and influencers to the brand’s flagship store in New York City. As a draw, the brand has teamed with LG Electronics to feature its LG Styler in store, via a steam closet meant to refresh clothes on the spot. LG debuted its original LG Styler system at NYFW in 2015, but over the years, it has been updated and improved. This also marks LG’s first big partnership with a fashion brand focused on the steamer closet concept.

WGACA and LG seem to be taking a page from Dyson, best known for making household appliances, and its many fashion- and beauty-centered partnerships since debuting its Supersonic hair dryer in 2016. For example, the brand teamed with The Arrivals in 2018 on a pop-up activation, where its dryers were used to create a wind-tunnel — allowing shoppers to give The Arrivals’ signature outerwear a trial run.

At WCAGA’s SoHo flagship, the steam closets, which became available to visitors on Tuesday, are located in the brand’s new concept space called The Vault, housed in the store’s basement. The Vault was originally created to house select vintage and luxury pieces, as well as exclusive drops and curated collections. The goal for LG is that, by introducing the product — which typically retails for about $2,000 — to a fashion-savvy, wealthier demographic, it will be able to drive sales for the product. Throughout fashion week, the space and LG Styler will be available by appointment to top-tier guests, said Seth Weisser, co-founder and CEO of What Goes Around Comes Around.

The two companies first worked together for the 2018 Bonnaroo Music and Art Festival. LG purchased 2,500 vintage items from WGACA and opened a thrift shop at the event, where attendees could dump dirty clothes in one of the 50 on-site washing machines and pick out a fresh, vintage outfit.

Since opening in its refreshed state, The Vault has welcomed several influencers including model and designer Joy Corrigan (682,000 Instagram followers), and NYC-based stylist Kristina Askerove (33,200 followers). Both WGACA and LG USA have been promoting the space via their Instagram Stories, to their 245,000 and 155,000 followers, respectively.

“Influencers are the most authentic way to bridge the gap between online marketing and offline events. And with so many resale and consignment options nowadays, WGACA doubling down on NYFW makes sense,” said Bea Iturregui, vp of brand partnerships at Cycle.

On Thursday evening, the brand will host a kick-off event for the new space, with influencers, editors and more. While the LG Styler will be a permanent fixture in The Vault and will be added to WGACA’s five other retail locations, the brand will be encouraging influencers to come in throughout fashion week to use the steam closets for an outfit refresh.

“What Goes Around Comes Around is approaching New York Fashion Week in a way that shows that they’re familiar with the event. Their activation is an add-on for the event, versus an interruption,” said Brian Reitz, marketing manager at influencer marketing company InfluencerDB. “From an advertising perspective, a lot of what we see out there is disruptive. This takes a better approach.”

Reitz said that, while many brands focus on having influencers post about their brand or send them free merchandise to wear throughout the week, WGACA is focusing more on building lasting relationships with those influencers, providing them with services that will actually be useful throughout a busy NYFW.

“NYFW can seem like a fleeting week; everything is so ephemeral,” said Reitz. “With social media, one of the bigger challenges with influencers is that those one-off posts go away and get replaced with something new a few days later. Making investments that go beyond NYFW and building upon relationships with influencers beyond that one-off event is key.”