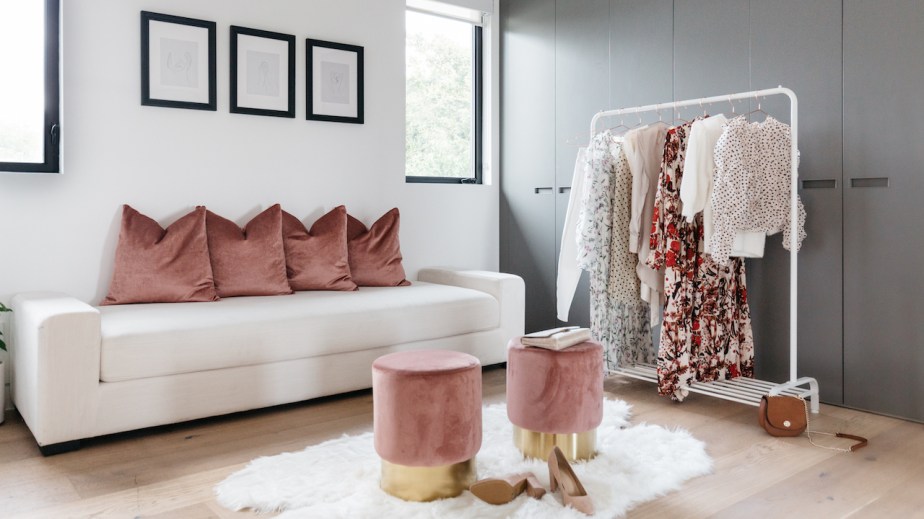 In a luxury building near the South Williamsburg waterfront, there’s an immaculately designed three-bedroom, three-and-a-half bath penthouse that rents for $15,000 a month. The master bathroom is outfitted with a cozy soaking tub and Gucci wallpaper, complemented by natural light flooding in from the floor-to-ceiling windows in the master bedroom. There’s a prop closet nearby filled with coffee table books, magazines, throw pillows and decorative objects that can be swapped in and out of each room — roughly $40,000 worth of decorations. Though no one lives here, the home will have a steady stream of influencers and celebrities coming in and out through a private entrance (with a private elevator) almost every day of the week.

The space is owned by Village Studio, a company that scours major cities for apartments and homes with optimal lighting and space for brands and influencers to shoot Instagram images and videos. The first studio, opened in New York City’s SoHo neighborhood in August 2018, is outfitted with many millennial pink accessories, including a custom blush pink couch seen all over Instagram. The second opened last week in Los Angeles, just ahead of the Brooklyn studio, opening this week.

Village Marketing founder Vickie Segar opened the first space driven by brands ramping up how much social content they were posting and the growth of influencer marketing.

“If you look at social media, consumers are spending time with influencers over brands because social is meant for human connection. Influencers, by and large, are producing 10 times more content a day than most brands are in one week,” Segar said. “Plus, when I worked in advertising, we rented warehouses for shoots. We went into these big studio spaces and did $30,000-$200,000 shoots for print alone. As we saw that model changing, I knew that content was going to shift in the way it was produced.”

Segar said that, in the last year, she’s noticed more brands using the original space, coming in with smaller production crews. Sometimes it’s just a social media manager and an iPhone. Segar said roughly 70%-80% of business is coming through brands booking the spaces, but most brands bring influencers with them for their shoots: Olivia Culpo came in with Colgate, Karlie Kloss came in with Express, Emily Ratajkowski with Kerastase.

“A lot of brands are starting to launch content studios, as they should. Every single brand should have a studio, but we will always have a business because there are not a lot of people doing this, especially in a professional way. Influencers need a variety of spaces, always. People come in here and try to get 10 videos and 30 stills in a day,” Segar said.

Village Studio is an arm of Village Marketing, an influencer marketing agency that helps brands of all sizes connect with influencers. That portion of the business helps bring a steady stream of influencers into the house. Influencers, including existing Village Marketing clients, make up roughly 20%-30% of the occupancy. Village Marketing’s influencer partners include fitness trainer Megan Roup, fashion model Lindsay Solmer and food blogger Sarah Crawford.

“I was also just really excited to be able to potentially have a space to shoot content in,” fitness trainer Megan Roup said of the space. “Oftentimes, for me, that that can be a really hard task to find a space.”

Roup has shot in the SoHo studio three times now, using it to shoot video for her fitness app and other content for Instagram. The beauty of the space for Roup, and all the other influencers and brands that come through the doors, is that it’s designed to be modular. Furniture can be moved around or taken out of the space (a service provided by the Village Studio team), books can be swapped out of the bookshelf, art can be taken off the walls and moved, new art can be brought in, and curtains can be hung on the windows if needed.

For the Williamsburg home, Village Studio partnered with Maiden Home, a DTC furniture brand, as well as Boll & Branch for linens and towels. Maiden Home provided most of the furniture in exchange for getting its products photographed by major brands and influencers. In addition, it can use Village Studio as a showroom of sorts. Segar chose Maiden Home for the furniture because the company can make custom pieces in six weeks, allowing the the space to be decorated fast and Village Studio to start making money.

“It was a pretty crucial component for us, getting the space up and running pretty quickly, which we did. We cut out three months [with Maiden Home]. We had some custom furniture in the SoHo studio that took three months to make, which was not good,” Segar said.

Influencers can use these spaces for free, with no official contract. They don’t even have to tag the studio, though most do; instead, they’re required to fill out a form on the Village Studio website with their name, email address and a line on why they want to rent the space. Brands do have a contract and pay a fee, between $3,000 and $15,000. The fee largely depends on how much furniture needs to be moved around.

The concept of renting a home out to an influencer or brand isn’t a new concept, said Segar. People in Los Angeles have been renting their homes to the YouTube community for quite some time, she said. There’s also been buzz around this idea thanks to a collective of Gen-Z TikTok influencers, called Hype House. There are 19 members of this collective, and four of the 19 live in the mansion full-time. The others drop by when they please to shoot content. Village Studio is a similar concept, except no one — not even Segar — sleeps in this house.

“I commute from North Carolina, and I won’t stay here when I come up. I stay in hotels because no one can sleep here. It has to be perfect,” Segar said.