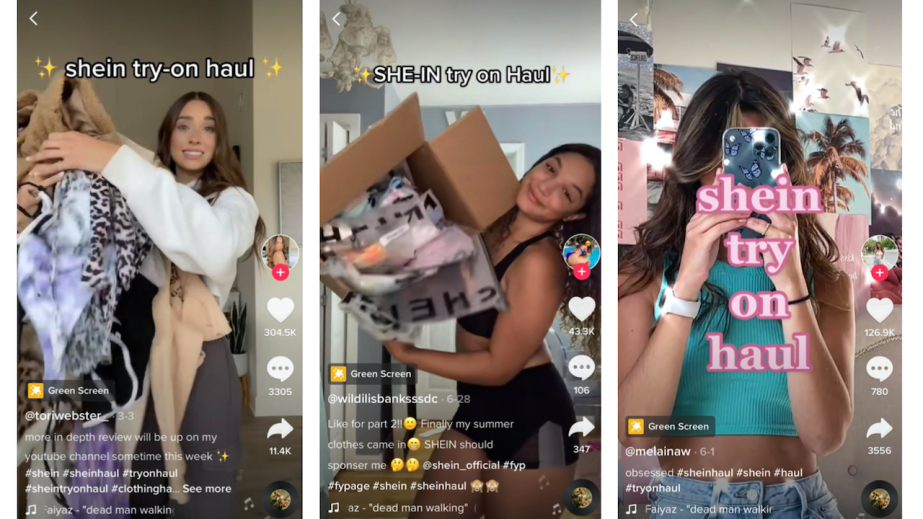 As the world’s largest online-only retailer and an ultra-fast fashion brand with an estimated valuation of $30 billion, Shein has surpassed the fast-fashion model set by H&M and Inditex. That’s only been spurred by the rush of grounded shoppers moving online during the pandemic. It now accounts for 28% of the fast-fashion market in the U.S. alone, according to Earnest Research.

Founded in 2008 by CEO and SEO specialist Xu Yangtian, the Nanjing-based company initially started as a wedding dress business. After a rebrand in 2014, Sheinside became Shein and began its rise to the top of online retailers. That’s been fueled by the data-mining-based social network analysis that’s allowed it to create limited batches of new pieces, as well as by the tax breaks it’s received thanks to its cross-border e-commerce model in China. Due to the 2018 trade war with the U.S., China’s waived export fees for direct-to-consumer brands relying on cross-border e-commerce. Meanwhile, the U.S. does not tax packages below $800, allowing Shein to take advantage of its positioning and grow exponentially. Although its production is based in China, the brand’s main markets are abroad. It ships to more than 220 countries or territories.

As younger shoppers spend increasingly more time on mobile devices, Shein has incorporated gamification into its app, rewarding customers with points for frequent cumulative logins, as well as for playing its in-app minigames and writing reviews. It surpassed Amazon and became the most downloaded shopping app in the United States in May. One in three global consumers call their mobile phone their preferred shopping channel, and 50% of Generation Z and millennials say they never go shopping without using a phone, according to a 2021 Future of Shopping report by Snap.

The Shein X incubator and competition
In January, the brand launched Shein X, a fashion design incubator program supporting over 500 designers, with new designers being added every month. Highlighted on a separate section of the website, Shein X is advertised as “a way for indie fashion designers to get noticed.” The program allows them to develop a capsule collection from sketches, with Shein “handling the manufacturing, marketing and selling.” The site also mentions that designers can take advantage of Shein’s “millions of fans on social” for promotion, while “splitting profits and keeping ownership of designs,” with Shein X’s prices ranging from $5 for a crop top to $60 for the most expensive dress. Considering the growth of the program within the last couple of months, it appears that Shein X has been an opportunity for fashion enthusiasts to develop their own styles, although all of the styles are subject to discounts and sales at Shein’s discretion.

Rebecca Morter, the founder of Lone Design Club, a U.K.-based e-commerce site focused on supporting sustainable brands, said that big brands can learn from emerging designers. “It is often these early-stage brand [founders] that are paving the way for the future, when it comes to innovation, sustainability and what’s to come next. The worry with what Shein is doing — especially with their target audience of Gen Zers — is that it is making them think that it’s OK to pay next to nothing for an item of clothing, when the only way to have reached that price would mean exploiting people along the supply chain, from the makers to the designers.”

The multiple discounts that Shein offers are obtained by a type of bargain hunting that calls to mind extreme couponing. The strategy is a fit, considering its shoppers and their limited disposable income. Shein’s popularity has been growing on social media platforms, including TikTok. The #sheinhaul hashtag, which is paired with users showing off multiple looks from the site, has over 3.3 billion views on the platform.

Amid the incubator program’s growth, the brand added the controversial Shein X competition in April, paired with the slogan “Be Bold, Be You.” It’s focused on finding design talent from around the world via a show that is streamed on the Shein app and the retailer’s social media platforms. The show is split into four stages, in which the contestants are whittled down to five, with the help of five industry judges and a public vote. The judges are veteran fashion insiders in their own right: Jenna Lyons, CEO of Loveseen and former creative director at J. Crew; American fashion designer Christian Siriano; celebrity fashion stylist Law Roach and reality TV star Khloé Kardashian. The brand has not disclosed whether these were the only participants asked to take part in the program or whether securing them required a large investment.

The entrants range from self-taught boutique owners and design graduates to artists and streetwear specialists. All the contestants get to feature a capsule collection on the Shein website in September, and five finalists get various prizes and a showcase during Shein’s Fashion Week. The grand-prize winner will receive $100,000.

Sheila Langton, founder of the brand EBIB, and Becki Ball, founder of Becci, both from the U.K., were two of the 30 competitors in the first round of the competition. Langton was previously a Boohoo and Shein ambassador, and Shein invited her to enter the competition as a Shein X participant. “This was by far the most amazing thing ever to have been a part of, and it was more than a dream come true to have gone far in the competition,” she said. “The whole Shein team was super helpful and very patient throughout”.

In the first episode, which aired on August 22, 30 chosen participants out of hundreds talked via a Zoom about their dreams of being part of the fashion industry and their collections. They also revealed how they would use the contest’s prize money, with answers ranging from buying a house for their family to paying off debt and developing their brand. They were then shown putting together their sketches and designing a three-piece capsule in under three weeks. They also styled and put together a photoshoot for their collection.

In the second episode, the group was edited down to five participants from the U.S. and Canada, who got to be individually mentored by the judges. Their mentor sessions included trying on a white feather-trim Christopher Kane coat with Law Roach, meeting in-studio with Laurel Pantin and Christian Siriano, taking a tour of Jenna Lyons’ apartment, and talking color cohesiveness with Khloé Kardashian. The contestants also worked with the mentors to create a show-stopping fashion piece.

Fast-fashion’s place in the market
Beata Wilczek, a Berlin-based educator, strategist and founder of the Unfolding Strategies consultancy, gave a talk a few years ago to students at a German art university. Titled “Miserable Desires,” it focused on the aspirational culture that fashion perpetuates as a system. “As I was explaining the basics of fashion’s environmental impact and its labor conditions, one frustrated student asked me, ‘But what if I need a new dress? What’s wrong with that?’ Although she had the advantage of being able to make her clothes, she didn’t even consider making them herself. It is important to know that future makers are also consumers.”

Celine Seeman, CEO and co-founder of Slow Factory Foundation and Study Hall Conferences, pointed to the wider issues with fast fashion and sustainable production: “Traditional fashion education has been teaching what the fast-paced fashion industry [has] needed: to design trends that won’t last and churn profit over planet.”

Becky Ball, from Norwich, Norfolk, first took an interest in fashion when she started selling pieces from AliExpress via a wholesale model when she saw growing demand. She studied fashion at the Norwich University of the Arts where she was a Shein ambassador and graduated during the pandemic. She launched Shein X Becci in June. “In doing influencer [marketing] and event work, I really loved the Shein brand and the clothes they sell. Despite the late nights and working constantly, I am so glad I got to see my designs come to life [in this competition]. It was a rewarding experience, and I have been very lucky to receive support from viewers of the show and people that have seen my work for the competition.”

Sustainable fashion advocates and leaders have been critical of the competition. Dr. Natascha Radclyffe-Thomas, a professor of marketing and sustainable business at the British School of Fashion and Higher Education Academy, said that Shein’s association with its Shein X celebrity and designer judges was a strategy. “We’re coming out of a pandemic, and there are a lot of challenges in the economy with people graduating without necessarily having roles to go into,” she said. “For Shein, it’s quite a smart move to associate themselves with that and to change the conversation. Whether they anticipated the sort of backlash that would bring with it is another matter.” Creating young fashion brands is notoriously difficult, making competition fierce. Therefore, the floor is open for fast-fashion brands to scout graduates and small business owners for their own design teams.

Becki Ball is aware of the impact that fast fashion has on the environment. “Deep down, everyone wants to be sustainable and look after the planet,” she said. “That’s my goal in the future, to have a brand that will adopt sustainable factors. But at the same time, when the industry is tough enough already, it feels like you can’t let this opportunity go. For me, being a university graduate, fast fashion is what I’m used to in my budget, because sometimes slow fashion is just too expensive. Brands are slowly going in the right direction, but at the same time, I think it’s OK if you’re buying from fast-fashion brands — it’s about how you use those products. If you are buying it for the sake of throwing it away, then that is a waste. If I’m going to buy something, I will be considerate about it. My clothes last me a long time.”