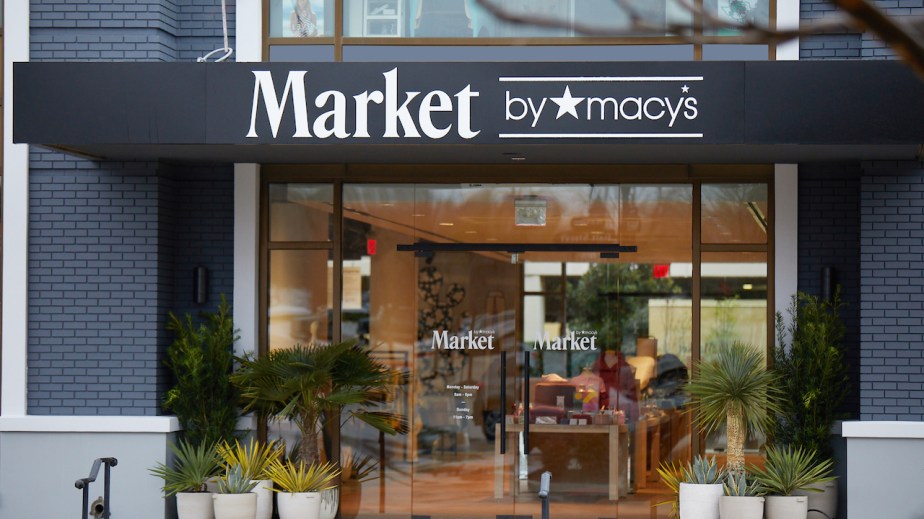 This week, Macy’s opened its newest store in Southlake, Texas. It’s the first in a new store concept for the retailer called Market by Macy’s, which focuses on a smaller footprint, localized product and content, and a heavier emphasis on experimentation and experiences. It’s the first iteration of a new way of designing stores that, after closing nearly half of its Story concept shop-in-shops earlier this month, Macy’s hopes can stay adaptable to all of retail’s changes for years to come.

The Southlake store is the first Market by Macy’s, a new retail concept that Macy’s plans to grow, if successful. Rather than 100,000-square-foot-plus stores located within or adjacent to malls, the Southlake store is 20,000 square feet and located in the Southlake Town Square, a smaller suburban shopping center. It’s only a single floor and represents a significantly smaller selection of brands — about 157 altogether — that are more specific to the local audience, said Rachel Shechtman, Macy’s chief brand experience officer.

“The purpose of the format is three things: discovery, community and convenience,” Shechtman said. “About a year ago, we started talking about creating a brick-and-mortar model that would stay relevant 10 years from now. Physical spaces need to provide a value that you can’t get from your couch.”

Shechtman was originally hired by Macy’s in 2018, when the company acquired Story, the concept store Shechtman founded in 2011. Shechtman oversaw the opening of 36 Story shop-in-shops in Macy’s, each with rotating themes and brands.

Macy’s recently closed 16 of those 36 Story locations, and Shechtman seems to have turned her attention to Market by Macy’s as the next phase of Macy’s retail experimentations. In a statement when the closures were announced, Macy’s said that the intention of Story was to learn what customers wanted out of an in-store experience. After closing 125 stores and laying off 2,000 employees, Macy’s, like many big retailers, is in a position where experimentation and a new way of doing business is needed.

Shechtman said she brought the learnings from Story to Market by Macy’s. Instead of 36 shop-in-shops opened in less than two years, Market by Macy’s is opening at a slower pace — only five locations in one year, in more suburban locations — and making each one its own store, rather than one part of a larger Macy’s store. The next one will also open in a smaller Texas shopping center, and Macy’s has already signed one more lease with plans for two more beyond that.

“For Macy’s overall, how do we grow and evolve?” Shechtman said. “We have great coverage across the country, but we need to fill in the gaps in markets where we don’t have stores, because there are existing or potential customers there. But we don’t have to do it with a full-size store. Consumer behavior is changing, and it doesn’t always make sense to open a 150,000-square-foot store in every market.”

The new store concept plays into a number of trends in how big-box retailers are rethinking their physical spaces to keep up with the way retail is changing. Experiential retail has continued to catch on (Shechtman said it’s “table stakes now”), and more retailers have embraced the idea of smaller stores with a local focus.

Nordstrom’s two stores in New York, opened last year, show this, with the larger store focusing on a global customer and the smaller Nordstrom Local stores, which focus more on services like alterations and returns, catering to a local audience.

For example, the Southlake store contains a diner area called Herald with local food curated by a local food critic and designed by a local architecture firm. At future Market by Macy’s locations, Herald will take on the cuisine and style of whatever market it’s in.

“When we look at our revenue streams, a huge percentage comes from merchandise, but a significant amount comes from event programming and food and beverage,” Shechtman said. “Those are not ancillary revenue streams. Digital platforms and e-commerce have made everyone want a higher return on investment of their time, if they’re going to go out to a store. They want to shop, have dinner and go to an event, all in one outing. We already average three or four events per week at Market by Macy’s.”

For retailers, the same large-format store that might work in New York City is not as sustainable elsewhere in the country. Over the last year, plenty of retailers including Macy’s have struggled with high rents and low foot traffic, and a network of expensive stores to maintain. It’s increasingly evident that change is required for brick-and-mortar retail to stay healthy and relevant.

“Experimenting with different store formats allows retailers to identify the best size and location of stores for individual markets, and smaller footprints enable brand penetration in smaller markets that can’t support a large-format store,” said David Naumann, vp of retail marketing at enVista. “We are seeing several brands expand into strip malls that offer the advantage of rents about one-half the cost of traditional malls and offer greater convenience for shoppers.”