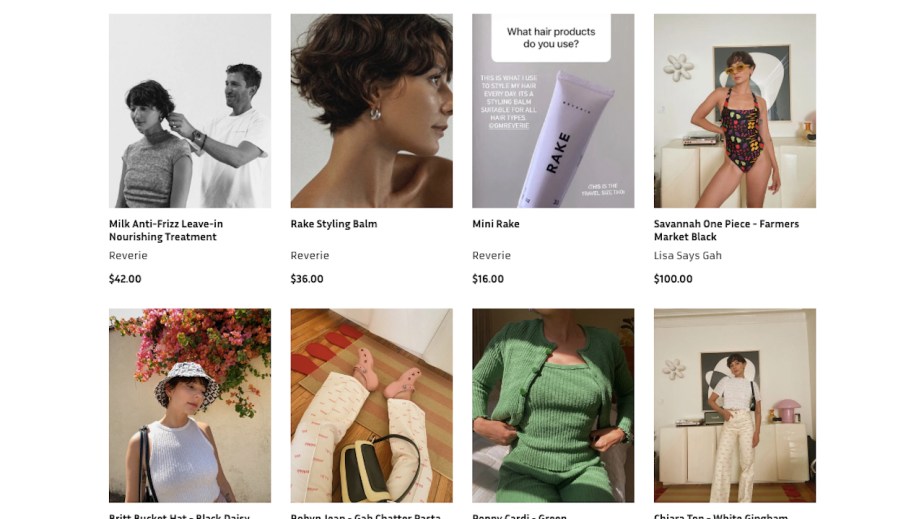 Influencer marketing gets a Gen-Z upgrade with Emcee launch

Fashion influencer Alyssa Coscarelli prefers to showcase niche indie labels to her base of over 366,000 Instagram followers, but that has often meant fewer opportunities to monetize her account.

“I’ve been working with myself as a creator for over 10 years now, and I’ve probably missed out on a lot of affiliate earnings,” said Coscarelli. The products she likes to feature, such as Lirika Matoshi’s cult dresses or Bien Mal’s artistic throw blankets, are often not on major platforms such as LikeToKnowIt and RewardStyle. But she recently became the director of partnerships for a new influencer affiliate platform called Emcee, which launches on Wednesday. It’s aimed at getting buzzy indie brands into the influencer marketing arena.

“I choose to support small indie brands a lot of the time, so this really widens the net, from the Neiman Marcuses and the Michael Kors of the world, to more of the Lisa Says Gahs — more of the independent brands that are operating on Shopify and popping up left and right now,” she said.

Founded by John Aghayan, who also acts as CEO, Emcee is a site and soon-to-be iOS app that offers influencers the opportunity to create a curated storefront on its platform with commissions ranging from 5-25% on items sold. In contrast to other affiliate links programs that link out to a brand’s site, Emcee is integrated with Shopify’s “sales channels” platform to allow on-site checkout for participating brands. To reach Depop-obsessed Gen-Z shoppers, the platform also allows influencers to directly sell their personal items on their storefronts. With bold, colorful design and buzzy brands including One DNA, Simonett and Chillhouse, the new platform is aiming to open up affiliate marketing to a younger and more indie-leaning audience.

“Influencers are amongst the most powerful retailers,” said Aghayan. Previously the founder of New York concept clothing store Le Board, he was inspired to start the business after seeing the pitfalls of wholesale distribution and the rise of influencer marketing both pre- and post-pandemic. To attract smaller indie brands, it does not charge a fee to be on the platform but takes a 10% commission on each sale. “It’s an alternative distribution model for brands,” he said. With affiliate links currently accounting for 3% of influencer revenue, according to CB Insights, he also sees room for growth for the participating influencers (which the platform calls its “Emcees”).

While the earlier generation of influencer platforms such as LikeToKnowIt have more of a mainstream, millennial-pink Instagram aesthetic, Emcee is decidedly “more Gen Z,” said Aghayan. The decision to pursue the more colorful, younger look was about targeting all age groups. “We also believe that if you have Gen Z, anybody would come, but if you go for a bit older demographic, you would probably lose Gen Z.”

One of the first retailers taking advantage of Emcee’s new aesthetic is online fashion boutique Lisa Says Gah, known for spearheading what has been dubbed the “avant basic” Instagram trend with it-girl brands such as House of Sunny and Ganni. The retailer has been active on the prelaunch version of the platform since being onboarded with 30 other brands earlier this month. Lisa Says Gah has already seen success with affiliate channels such as Impact and Radius, but this marks its first time branching into influencer-specific affiliate marketing, said Madeline Sensibile, its manager for content and partnerships.

“Our storefront for Lisa Says Gah very much is Instagram and always has been,” said Sensibile. She predicts that “the affiliate channel is going to continue to prove itself as this strong source of revenue for brands like us and for influencers like Alyssa, even those with more micro-followings.”

A strong e-commerce model is crucial for indie brands. Coscarelli noted that some of her favorite indie retailers, including Opening Ceremony, Totokaelo and Need Supply, “haven’t [survived] this new climate. Meanwhile, a lot of these indie brands, like Lisa Says Gah or smaller brands that operate on Shopify, have seen exponential growth in the last year.” Lisa Says Gah, for example, saw 300% year-over-year sales growth in Q1 of 2021.

The platform is launching with a focus on influencers, and it plans to add a dashboard by the end of 2021 for brands to find and contact influencers directly for campaigns. It will also continue to add features including one-click buy and the opportunity for influencers to create an email newsletter for followers.

Influencers must apply to be on the platform and go through a vetting process overseen by Coscarelli. Once accepted, they can sell any brand on the platform and must use their own original imagery for each post. According to Coscarelli, they are chosen based on their aesthetic, and whether they have a niche and can be considered a “tastemaker in some space.”

“It doesn’t have to be fashion or beauty, but we just want to make sure that they are an authority in whatever their audience or their world is,” she said. Coscarelli is the first influencer to have an active storefront for the launch, and is currently evaluating around 500 influencer applications.

According to Coscarelli and Aghayan, the rules are changing for influencers, as an overly polished persona and inundation of sponcon is off-putting for younger shoppers. With Gen Z, “you can’t post sponsored posts constantly; you have to be careful,” said Aghayan.