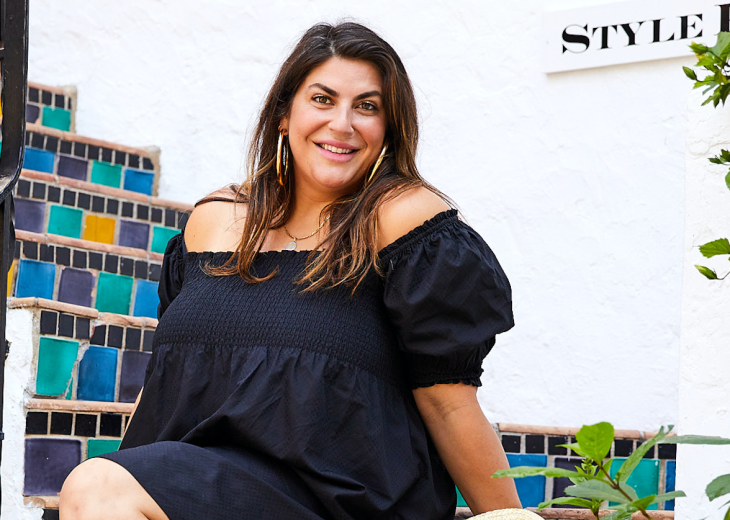 Katie Sturino is the kind of influencer you follow because you wish she was your best friend — and it kind of feels like she could be. To her 580,000 followers on Instagram, she’s earned her stripes as the girl who sticks up to bullies, whether that bully is someone being rude on social media or a top fashion brand with a paltry size assortment.

In 2018, Sturino started #makemysize, in which she’d call out the brands that did not and show dressing room pics of dresses that wouldn’t zip. It’s an experience most women can relate to, but couldn’t imagine calling attention to. But in doing so, Sturino helped women realize they weren’t alone, and she realized that a lack of body confidence is a bigger problem than she’d imagined. The unfortunate truth, she discovered as she grew her platform, is that, “Women of all sizes hate their body.”

Initially, she assumed her audience was made up of other women size 12-plus. “I thought it was a size thing,” she said. “[I wanted] bigger girls to [know that they deserve] to feel fashionable, cute, sexy and beautiful.” But then the messages came in — from women who were sizes 2, 4 and 6 — thanking Sturino for giving them the courage to skip a pre-vacation crash diet. “I realized this is a women’s problem. I thought, ‘If a size 2 woman hates her body, I have no hope.’”

Ultimately, Sturino landed somewhere different and, fortunately, less hopeless. “What I came to was, ‘What’s the point [of hating your body]?’” Where she went from there — a journey of self-acceptance and deprogramming — is the foundation for her new book, “Body Talk,” that came out on Tuesday. It’s for “every woman,” from women in their 70s to moms of young girls, to young women themselves. There is even a section called “Don’t Blame The Moms,” because, “[Having hangups around body image] is not your mom’s fault. This is just how women have been brought up by society. It’s a bigger problem. And we all have to kind of work through it together,” she said.

Sturino was looking for a way to take offline the lessons she was sharing on her Instagram, so she approached Crown Publishing Group imprint Clarkson Potter. She didn’t feel the world needed a “memoir” from her. But with “Body Talk,” she landed on something different. Along with sharing her personal story, she prompts readers with small “homework” assignments that ask questions like: “What you would do with the time you could save if you stopped agonizing over what you do or don’t eat.” And certain messages aren’t made for social media, she said. “Trying to teach someone something this in-depth on social media is too hard. It’s too easy to be like, ‘I don’t want to think about this right now. I’m gonna go watch TikTok.’”

Now four years after introducing #makemysize, she’s had the opportunity to talk to countless women and has identified a throughline in many of their stories: Most remember the moment when she first got the idea that there was something “wrong” with her body. Through the book, Sturino aims to help the reader unpack that moment, with the reader knowing that they’re being guided by someone who genuinely gets it. After all, Sturino based the reader’s journey on her own. “We start by identifying a time in our life when you were not ashamed of your body. And then we identify the time in your life when someone told you your body is wrong, and you started to feel like you had to change it.”

“It’s a step-by-step program, with an opportunity to do the homework and get deep on your own journey at the end of every chapter,” she said.

The fashion industry has made (slow) progress, when it comes to size inclusivity. “I used to be scared to say, ‘DVF, I can’t fit into your clothes.’” For so long, the implicit response was, ‘Well, you’re too fat to wear them.’ But now, Sturino said, she realizes that it’s not her problem. “The fashion industry is fucked … and has been trying to push one size and shape on women for so many years, and it doesn’t make any sense. Now, I feel empowered around that conversation. In turn, I have passed that to other women. Instead of crying in a fitting room, they’ll now post a photo of jeans not getting over their knees and say, ‘This isn’t a size 10. This is bullshit.’”

Today, Sturino is the host of “Boob Sweat,” a podcast (currently on hiatus) on things that are typically considered taboo, and the founder of Megababe, a beauty and personal care collection. Megababe started with Thigh Rescue, an anti-chafe stick that’s sold at Ulta Beauty. In April, Ulta shared a video on Instagram of Sturino applying the stick, which garnered comments about how Sturino should be embarrassed to apply such a product in public. “The Ulta post really made me feel like, ‘Holy fuck, we have like a lot of education to do.’ Because a lot of the women that were criticizing, if you go to their profiles, they’re the ones that need Thigh Rescue. At the beginning of my platform, women would be like, ‘You shouldn’t be wearing that.’ And then you would go, and they were like a size 12, 14, 16. They were just repeating what they’ve been told.”

Megababe, she said, is a reaction to this society that’s for so long told women something is wrong with their bodies. “It was born of the realization that nothing’s wrong with our bodies. And nothing’s wrong with having thigh chafe or sweating, like under your bra. Those things are actually quite relatable. The fact that the beauty industry ignored [these problems] for so long means that we’ve been made to feel strange about them and alone about them.”