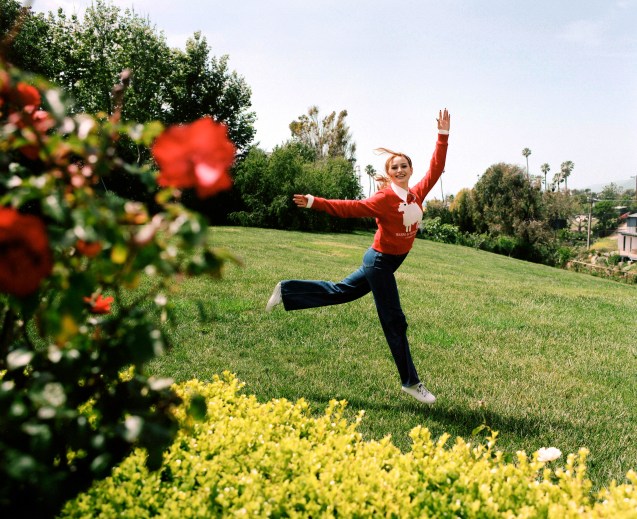 By upping its focus on brand values and quality, and its link to popular culture, leisurewear brand Warm & Wonderful is rising to its iconic status once again after being worn by Princess Diana 40 years ago. Warm & Wonderful has done over $5 million in sales with over 20,000 customers in its first 18 months since relaunching in 2020.

Launched in 1979, U.K.-based Warm & Wonderful was founded by Joanna Osborne and Sally Muir, who created the famous sheep print sweater. The brand gained popularity when a young Princess Diana wore the eye-catching black sheep jumper to a polo match in 1981. The unique design made with wool through a knitting technique became a hit. Soon after, it gained a cult following that included artists David Bowie and Andy Warhol.

“The [sheep print] jumper was very big in 1981, when Diana first wore it, and in 1983 when she wore it again,” said founder Joanna Osborne. She admitted that growing the brand back then was slow as the brand had to rely on word of mouth instead of internet after the initial boom. The brand changed its name in the ’90s to Muir and Osborne to highlight the artist founders, however its customer base dwindled as it product designs changed.

Fast forward to 2020, and it was a different story. Jack Carlson, the founder and creative director of heritage brand Rowing Blazers, reached out to Osborne and Muir, wanting to know what happened to the label that was so well-loved in the ’80s. “I was amazed no one approached them with this idea for a relaunch before. Not Chloé, not Lanvin, not Brooks Brothers, not Scotch and Soda. All these brands have done pretty clear knockoffs of this jumper,” said Carlson.

Muir, Osborne and Carlson agreed that the relaunch of the iconic sheep jumper should be under the brand’s original name, due to its brand recognition. The Warm & Wonderful and Rowing Blazers collaboration, launched in 2020, sold out in four minutes. From there, the collaboration expended to include other color editions, and resulting sales made it clear that the brand had the potential for ongoing growth. “The brand really has its own identity, which is nothing really new or made up — we have just brought it back,” said Carlson.

Carlson created a global e-commerce site for Warm & Wonderful that same year. He also grew Warm & Wonderful’s global brand reputation through targeted collaborations with brands like travel goods company Globe-Trotter in December 2021. It featured the sheep design on the brand’s luggage. The team also launched a pop-up in London near the site of the original brick-and-mortar store from the ‘80s, with updated decor and marketing around the brand’s history promoting the activation. The brand has not yet delved into its rich archive but is hoping to launch more of its notable styles, such as its brick-wall jumper with customizable graffiti, in the coming year. In the past, many of its shoppers opted to customize the jumper with rude words. Warm & Wonderful’s customer base is primarily in the U.K. and the U.S., but it is actively expanding its reach globally through future pop-ups and events.

Additional marketing updates, like the brand’s latest campaign in April with actress Madeleine Petsch, have brought the brand in line with a younger consumer interested in heritage pieces. NY-based Carlson is now the creative director of Warm & Wonderful and is working with the two original founders via a unique transatlantic and intergenerational partnership, which he has replicated from his work with the co-founder of the Rowing Blazers brand David Rosenzweig.

Warm & Wonderful has also restructured many areas of its business that it previously had not prioritized. For example, the company moved its production from the U.K. to Portugal, where the items are made with ethically sourced lambswool. It is looking at different certification standards for its wool in the coming year, but Carlson admits this has been difficult. “Ironically, some of these certifications and things are set up with the best of intentions, but they can be geared toward very big corporations that have teams of people who can sort it out,” he said. “When you’re a very small team, it’s a lot more challenging.”

The brand plans to expand its assortment to shoes, cardigans and other items over the course of the year, and it’s planning to host longer-term pop-ups in locations outside of the U.K. It is also looking at expanding into wholesale.