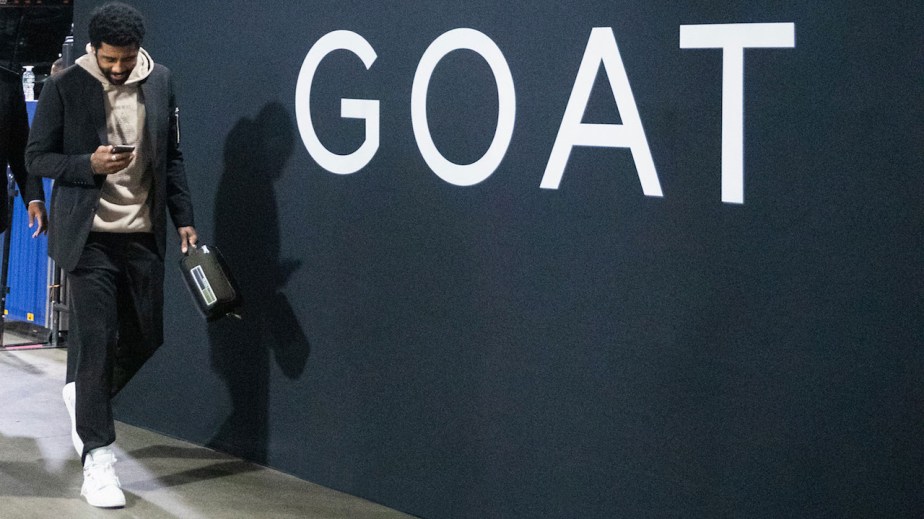 It’s no secret that China is an incredibly valuable market for fashion brands. But in an effort to reach the Chinese audience, some brands are turning to a decidedly American way to reach those customers: the NBA.

Basketball is massively popular in China — the NBA is the most-watched sports league in the country: 500 million people in China watch NBA games, plus more than 300 million people play basketball regularly. The NBA’s Weibo account has 33 million followers from China, 6 million more than its Twitter account, which has followers from around the world. The NBA has already been popular with fashion brands looking to go after American customers, but now, companies like GOAT, Sprayground and even juggernauts like Nike are using the NBA as a tool for going after Chinese customers.

For sneaker resale platform GOAT, this move has taken the form of two initiatives. The company announced last week that it will be an official sponsor for the New York Nets for the 2019-2020 season. In addition, it has made significant inroads into China, launching a local app there over the summer. It’s made China its first and biggest priority market outside the U.S., said GOAT co-founder and CEO Eddy Lu, who added that these two efforts are intertwined.

“The sneaker community has grown tremendously in China, along with the rise of basketball and hip-hop culture, so it’s no surprise the demand for sneakers has grown there, as well,” said Lu. “We know that there is a huge need to ensure authentic sneakers in the global sneaker industry, and we believe China is the perfect market for our global expansion.”

As part of its sponsorship of the Nets, GOAT will provide branded arrival paths for the team. These arrival paths — the short path where players are filmed arriving to games — have become a fashion phenomenon of their own. Esquire called it the “concrete runway,” and players frequently use the moment to show off their looks. For GOAT, having their name associated with this moment is a great way to build an audience and introduce the brand to new customers.

“It’s one of the easiest layups for GOAT,” said KJ Ho, vp business director at brand agency Optimist. “The entrance, the walk that NBA players take is heavily photographed and heavily covered on social media. People follow what the players wear, so it makes total sense for GOAT to be there. Think about the connection point for customers. You see a player wearing a cool sneaker, you wonder where to get it, GOAT’s name is right there.”

Ho pointed out that the NBA has also become smart about divvying up sponsorship opportunities, allowing a newer company like GOAT to use the piece of the NBA experience they want to target their customer without having to dump millions into a huge sponsorship package.

Streetwear brand Sprayground is another company using the popularity of the NBA to reach a Chinese audience. Sprayground partnered with the NBA last year to design bags and jerseys for 10 different teams and collaborated this week with Spalding, the makers of the NBA’s official basketball. Sprayground founder and creative director David Ben David said these efforts with the NBA have partially been responsible for the company’s massive growth in China over the last six months.

“We’ve opened 31 new stores in the last six months alone, all in China,” David said. “America is where a lot of our business still is, but China is absolutely a big market, and it’s growing, particularly due to the embrace of things like basketball and hip-hop. Maybe we’ll have a flagship store in Los Angeles one day, but for now, all of our stores will only be in China.”

Entering into the Chinese market is particularly difficult for online-focused companies like GOAT. Chinese internet regulations mean there’s no Twitter or Instagram use in China, which GOAT relies on heavily for advertising. What’s more, the regular GOAT app available on American phones is inaccessible in China, which is why the company had to launch an entirely separate app earlier this year.

On top of that, ongoing political unrest can have an impact on brands’ performance in China. When a Houston Rockets official Daryl Morey tweeted support for the protests in Hong Kong, the NBA immediately reprimanded him and issued an apology for offending fans in China. (Notably, the English language apology simply apologized for offense taken, while a version posted in Chinese said the league was “extremely disappointed” in his “inappropriate remarks.”)

Nike has had a longstanding partnership with both China and the NBA, but Morey’s tweet put the company in a bind. To assuage Chinese customers’ anger, Nike dropped Houston Rockets gear from their Chinese stores, a move that immediately drew sharp criticism from people in the U.S., including the vice president.

“The brands entering China have to invest in the digital tools to make it work, and you have to be careful of the geopolitical landscape there, as well,” Ho said. “But it really makes sense for GOAT or others in the sneakers or streetwear world to go into China because there’s such a huge market for it there.”