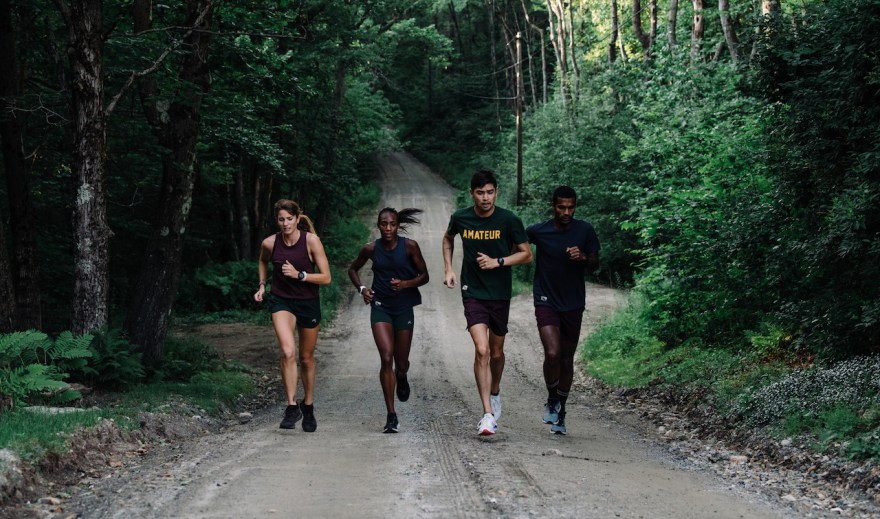 The name Tracksmith may not resonate with the average shopper, and that’s OK with the brand’s co-founder and CEO, Matt Taylor. The brand was built specifically for the running community, among which it’s grown a cult following — and that community is only growing. A study by Running USA found in 2018, 18.1 million people registered for a race in the U.S.

Tracksmith began five years ago with the mission of filling a gap in the market: timeless running gear that doesn’t make runners look “like power rangers,” said Taylor. Tracksmith positioned itself as an anti-Nike by not building the brand and its marketing around elite athletes. Instead, Taylor said the brand is meant to focus on “the amateur spirit” of the sport by growing a following among those running a 5K for the first time or training for double-digit marathons.

“If you look at the history of the running industry and how every running brand that has become successful started, you really need to have more of a grassroots approach in the beginning. Paid marketing is just an opportunity to layer on top of the foundation. There is no way a brand like ours could exist long term if you skip that first step,” said Taylor, referring to building a community of runners and brand loyalists to spread the word about the products.

Only in the last two years has Tracksmith turned to paid marketing, mostly through social media on Instagram (where it has nearly 55,000 followers) and paid search, to accelerate growth. Still, the brand avoids working with mega-influencers. Where Tracksmith does do some sponsorship is at the Olympic-qualifier level. In January, it offered product, coffee and support to amateur runners aiming to qualify for next year’s Olympic Trials Marathon in Atlanta.

“Working with micro-influencers, people that are looked up to within a community, is the way to go if you want your brand to sell more. If you want to build brand awareness, of course, go with the big ones. But if you want to start a trend, going smaller is the way to go,” said Alessandro Bogliari, co-founder and CEO of MediaCom USA.

A big jump came after opening the first and only retail location in Boston in April 2017, called The Trackhouse. The brand declined to share revenue but said the business has doubled each year for the last two years, tied closely to the opening of that store. T0 date, Tracksmith has raised $6.7 million in funding.

As part of the Tracksmith’s retail strategy, it utilizes the space beyond just selling its latest singlets and split shorts. Taylor said the store is running some sort of programming every day of the week, promoted on its website, through Facebook and on running app Strava. Sometimes that’s a summer Friday 4-mile run followed by beers at The Trackhouse; other times, it’s events around new products available only in the store, not online.

Three days a week, Tracksmith hosts free runs for the community, while other running groups use the store as a meeting point for runs. The store is also home to an in-house physical therapist in a move to help the company become a hub in Boston for the running community. “We think about it as much as a retail store as a service to the community.” said Taylor.

The brand doesn’t have plans to open additional, permanent retail spaces, but pop-ups are a big way the DTC brand drives awareness outside of Boston. This year, Tracksmith made its first appearance overseas, hosting a pop-up around the London Marathon filled with limited-edition London apparel. The company also hosts pop-ups at the Chicago Marathon and New York City Marathon each year.