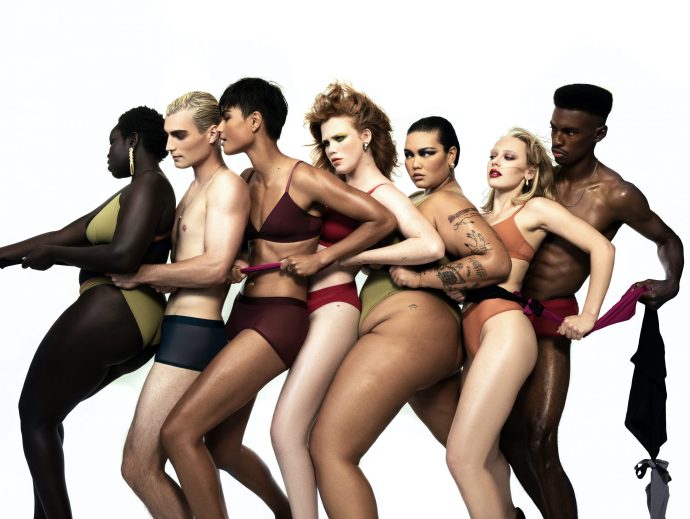 How lingerie brands are addressing their sustainability impact

The Environmental Protection Agency estimates that the average American throws out 81 pounds of clothing a year, with underwear company The Big Favorite estimating that approximately 11 million pounds of T-shirts and underwear are thrown out each day in the United States, as T-shirts and underwear account for 15% of the total amount. Typically only about about 15% of that textile waste is recycled. Underwear can be difficult to recycle outside of carefully monitored textile supply chains, as re-use is limited due to the element of personal hygiene. And even then, it is mostly downcycled, as opposed to being used to make new underwear, as it is made from a mix of fibers, including elastane. Mixed fibers are hard to separate, which is typically needed for clothing to be re-made into new items. While the sector has seen a big uptick in its incorporation of organic and bamboo materials, it still needs to do more to combat the amount of waste it generates.

Some brands in the U.S. like Parade are now taking back old underwear and recycling it, while others like Modibodi are making their items biodegradable. Meanwhile 2-year-old underwear brand The Big Favorite is focused on facilitating circularity, which it’s made possible by eliminating the use of plastic.

According to the 2022 consumer behavior report from Avery Dennison, over 60% of fashion consumers think brands and retailers should offer accessible end-of-life options for their products, like resale and recycling programs. However, the offerings currently in place for underwear brands don’t address the whole sector and are not without their complications.

This week, Parade became the first underwear brand in the U.S. to join the Science Based Initiative, which provides companies with a clear path to reducing emissions in line with the Paris Agreement goals. It also launched a first-of-its-kind take-back program with Terracycle, facilitating the recycling of underwear by any brand. Terracycle is one of the most well-known recycling companies in the U.S. It was recently embroiled in a lawsuit over its expensive take-back boxes and has since made adjustments to its consumer-facing services.

The Parade partnership with Terracycle is free, with the objective being to keep underwear out of landfills. Kerry Steib, head of impact at Parade, said, “In working with Terracycle, we had to figure out how to take these products that are often [made from] blended materials and turn them into something that more useful. While [underwear] cannot be put back into the economy as underwear, at the moment, it can be used in the circular economy [by being] turned into things like housing, insulation and furniture.” Parade is working to create a bio-elastane material. That would allow for a fully circular model, in which underwear can be recycled to create underwear.

Parade is also considering ways to educate the consumer on the impact of throwing away their underwear. Outside of prioritizing material innovation and launching a recycling program, it’s coming up with ways to offer transparency in its supply chain. “We’re figuring out how to bring our community into those spaces, while also providing opportunities for people to get involved and get closer to what we’re doing,” said Steib.

Other companies are aiming to avoid creating waste by focusing on how the materials they use can be broken down in landfills. The biodegradable briefs by underwear brand Modibodi were developed over two years and use a combination of natural and bioengineered synthetic textiles. Each has an inside liner, making it period-proof. Kristy Chong, Modibodi founder and CEO, said, “This is a product that reduces waste and doesn’t impact our planet when it reaches its end of life use.” As with the socks from Definite Articles, the items are biodegradable in active soil, or in landfills where the temperature and microbes aid in the decomposition of the material.

Modibodi underwear has the Standard100 certification by Oeko-Tex, plus it’s certified free of harmful chemicals. Ninety-seven percent of its components are scientifically proven to break down into nontoxic substances at the end of their usable life. And most of its materials decompose within 6 months when buried in active soil. The brief is also durable, tested to perform even after 100 washes. And it offers the same quality as the rest of Modibodi’s products, according to the brand. “We believe in responsible innovation, and we will continue to invest in sustainable solutions to support and protect every person,” said Chong. However, some components of the biodegradable brief would still take 5-6 years to decompose.

Companies like The Big Favorite have taken their supply chain into their own hands and created underwear that is directly repurposed into new material, with talks currently in process as to how the material will be repurposed by third party recyclers. Along with a wide range of other commonly used items like tanks and T-shirts made from Pima cotton, its underwear will get reused into new items once the company has arranged a suitable program. The process is simple: The customer scans a QR code on the garment to generate a label that can be used to return the item to the brand. The items are then cleaned, sorted and sent to a textile recycling partner, which sends the fibers back to the brand’s factory in Peru. This method of circularity is certainly the most environmentally friendly, as the fibers are not downcycled and are put back into the same system, prolonging their lifespan.