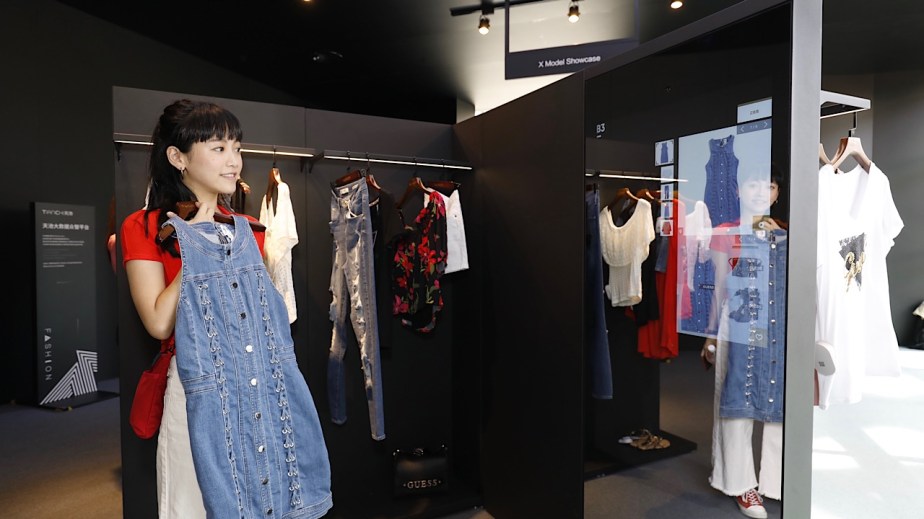 Last July, Guess partnered with Chinese e-commerce giant Alibaba to completely revamp its retail strategy with an eye toward artificial intelligence. Now, just over half a year later, it is ready to start ramping up its AI efforts across its business.

Since it lined with Alibaba, Guess has poured a lot of resources into AI as a front-end, consumer-facing tool. Things like smart fitting rooms and “magic mirrors,” where customers can see additional product recommendations on a screen in the fitting room based on what items they brought into it, have all become mainstays in Guess’s AI-focused stores. Edward Park, svp of North America at Guess, said success on the front end has encouraged Guess to integrate AI into the back end, as well, which it is now beginning to be implemented throughout the entire business.

“Our focus was always on experiential,” said Park. “The smart fitting rooms and all that, those are all experiential. But the back end is just as important. The initial concept of the AI store was to give a better experience to brick-and-mortar shoppers. But the data we gathered for the front end traveled back, and we started seeing how we could use it to improve all of the back-end stuff.”

AI for unsexy tasks like managing inventory and automating marketing has become the norm in the U.S., with brands from Yoox to Brooks Brothers heavily utilizing AI to help gather, sort and use customer data.

“AI applications range from supply chain logistics to email personalization,” said Corey Pierson, CEO and co-founder of customer analytics company Custora. “In today’s age of digital shopping, retailers have more data today compared with even just a few years ago. AI makes it possible for retailers to make sense of that data and leverage the insights to drive better decisions and better customer experiences.”

Though Guess would not disclose just how much money has been put into its AI efforts, Park says it is a comprehensive investment. To some extent, the investment seems to have paid off. After remaining stagnant for nearly 10 years, Guess’s revenue finally increased in its last earnings report, for the third quarter of 2018, though only by a modest 4 percent. Asia, where Guess’s AI efforts are strongest, also saw the strongest growth with more than 20 percent increase in retail sales.

However, as beneficial as these tools can be, they can also be used for ill. Last month, Guess was fined more than $45 million for using its back-end data tools to unfairly restrict where its retail partners could sell Guess goods. Guess products were being sold for as much as 10 percent more in certain parts of Eastern Europe compared to the rest of Europe, which is illegal.

For Park, other challenges have included ensuring that store managers at specific retail locations understand the AI tools provided to them and how they fit into the larger framework of Guess’ retail strategy. In other words, brands must make sure each store works in concert with the others and understands how AI can facilitate that.

“The big challenge with AI is in pairing it with actual, concrete business use cases,” said Pierson. “Many AI tools and AI-focused projects fail because, while the AI itself might be effective in predicting an outcome, business users aren’t able to leverage that insight in their day-to-day lives. For example, AI that predicts which products a customer might be ‘in the market’ for are not very useful if those insights aren’t cloned into email technology, where the marketing users have the ability to dynamically tailor the content of emails based on those insights.”

Ultimately, AI is not a miracle tool that will instantly fix all of a brand’s problems. It’s subject to misuse, poor decisions and ignorance as much as any other tool. What it can do for a brand is expand its ability to make informed decisions, so long as the underlying strategy is still sound.

“When you talk a bout AI, a lot of retailers will be confused,” Park said. “You have to be able to take baby steps to show them how AI can be a tool — not a solution on its own, but a tool.”