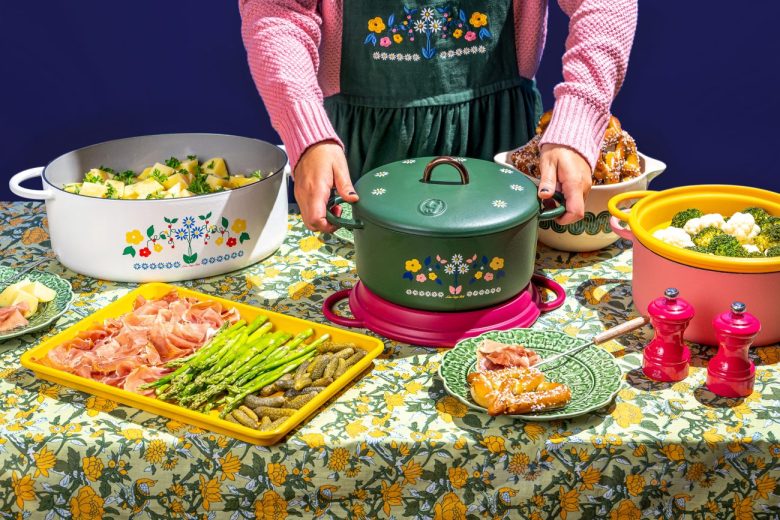 Great Jones, which launched in 2018, was founded by Sierra Tishgart, a former editor who started her career at Teen Vogue before entering the culinary world via Grub Street. Since launching the cookware brand, Tishgart has combined her background in the fashion and food worlds to inform the brand’s style and marketing. When Great Jones debuted, it had three profiles on people who “inspired us and how they cooked,” Tishgart said. One was fashion designer Rachel Antonoff.

Since then, the brand has continued to show up in fashion-related spaces and make itself known as the cookware brand for the fashion set. In September 2019, it debuted a dress printed with little dutch ovens, in collaboration with ethical fashion brand Zuri. The Cut called it “a dress for the hostess with the mostess.”

In January 2021, the brand collaborated with designer Rosie Assoulin on tea towels. “We pull inspiration from all sorts of places, and I’d always loved what Rosie had done with prints and maximalism — she had such a strong sense of self,” Tishgart said. The two were introduced through a mutual friend and Assoulin was interested in collaborating.

Of why her intersecting of fashion, food and design make sense, Tishgart said, “I have a deep appreciation for the creativity, but also [practicality]. For example, if you’re proud to keep your dutch oven on your stovetop, you’re going to use it more, you’re going to cook more. That sense of style and design can have real benefits in your life.”

As they do for any brand, collaborations have helped Great Jones reach new audiences — and when collaborating with fashion brands, it’s reached shoppers not entrenched in the food world. “There’s, of course, the Bon Appetit[-reading], food-obsessed person who’s a captive audience and loves home cooking. But when I was transitioning from the fashion world to food, I was new to cooking. I was coming in as an outsider, and I frankly found it extremely intimidating,” Tishgart said. Engaging in partnerships that “go outside of our space” allows the brand to excite consumers, Tishgart said. It’s also a way to get people excited about cooking who’ve been left out of the conversation by food media.

In the case of the collaboration with Lisa Says Gah, the LSG team reached out to Great Jones first, in March, sending Tishgart’s team a cold email. “That was such a nice email to receive. I’ve long loved what they’ve done — they’ve been at the forefront of joyful, fun fashion,” Tishgart said. Great Jones proposed its dutch oven as a canvas, of sorts, asking LSG what they would do if they could “take a paintbrush” to this. They worked on the design together, which both describe as 1960s-inspired alpine-chic and après-ski.

Like Great Jones, LSG is a veteran when it comes to collaborating with other like-minded brands. In 2022 alone, LSG collaborated with Vans, as well as Portland-based loungewear and underwear brand Arq. “I like to tap into a category we don’t have a presence in,” said Lisa Bühler, founder of Lisa Says Gah. LSG has a cult following, and it’s fun to partner with brands that have strong communities and followings, as well. But all partnerships are dependent on the brands’ ability to “mesh” well, she said, adding. “Having different points of view come together is really special.”

Lisa Says Gah’s summer 2022 ready-to-wear collection was called “Italian Summer” — it featured prints of food including tomatoes and baguettes. “People loved it, so we thought, ‘How fun would it be to work with a cookware brand?” Bühler said. “And Great Jones has a great aesthetic and great, quality products.”

The two brands decided to do a holiday launch, seeing as it’s a time when many people cook more than usual. But the design is intended to be seasonless enough that it can be kept on a shelf year-round, Bühler said.

Great Jones launched the collab’s Dutch Oven ($190) and Dutch Baby ($150) on its site, and both sold out over the weekend. For its part, Lisa Says Gah is selling the ovens and the rest of the collaborative collection in its brick-and-mortar store in Los Angeles, which opened at the start of November. The picture below shows the in-store display, designed by Bühler. The aprons are still available on the Lisa Says Gah site, as are Great Jones’s classic Dutch Ovens and Dutch Babies.

“We’ve never done an apron, but we’ve always wanted to,” Tishgart said. That said, she didn’t want it to be like any other apron. So Great Jones and LSG created a “party apron” with some flourishes, to offer the feeling of a party dress, Tishgart said.

Ultimately, Tishgart said, the collaboration answers one of the brand’s continual questions and core focuses, particularly as the pandemic has people spending more time at home: “How do you make your kitchen your happy place?” 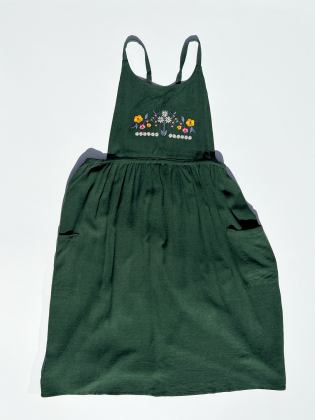 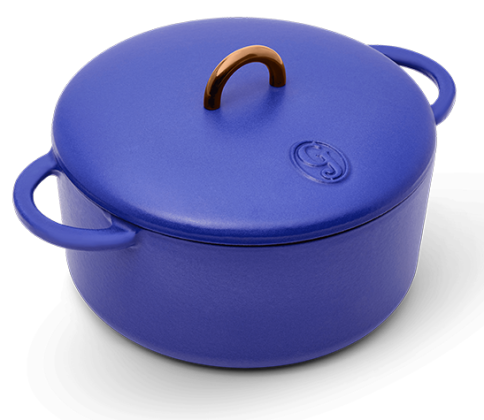 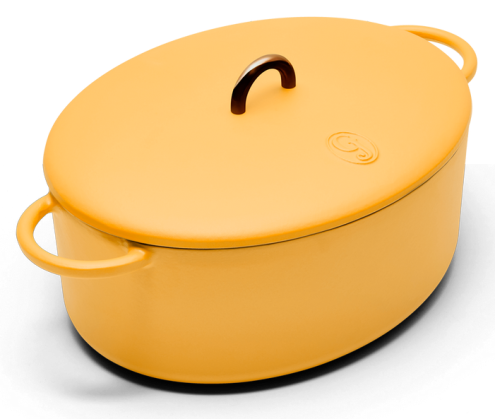