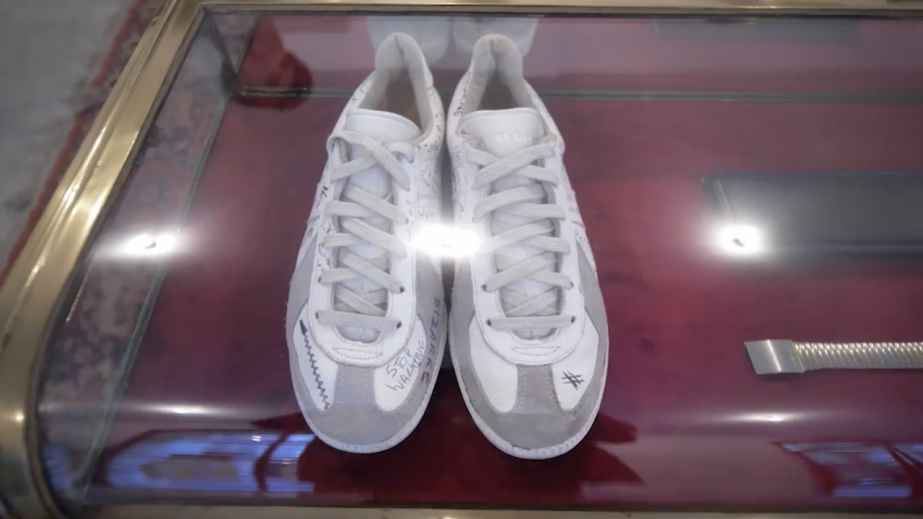 At Paris Men’s Fashion Week this past June, attendees at the Louis Vuitton show, along with a few other shows, were greeted to a strange notification on their phones: an Airdropped invitation to a Grailed pop-up showroom nearby.

For streetwear resale platform Grailed, its showroom, which was open timed to PFW, is its biggest offline activation that the online site has done. As the company looks to ramp up its offline capabilities, debuting its biggest brick-and-mortar project at Paris Fashion Week with a unique guerilla marketing campaign was the best way to announce that intention.

“People were shocked,” said Miles McKirdy, senior marketing manager at Grailed. “We did the Airdrop, and there was this crazy reaction at the Virgil Abloh show. [CEO] Arun [Gupta] sent out the fliers during the show, and, like the pied piper, he brought along this huge bunch of strangers who followed him from the show to the Grailed showroom.”

The Airdropped invitations brought in more than 400 people over the course of the weekend, eclipsing the company’s more recent pop-up effort that launched in Los Angeles earlier in the month. This isn’t the first time Airdrop has been used to promote streetwear. At this year’s Coachella, Donald Glover Airdropped a photo of his Adidas collaboration to attendees and gave a free pair to anyone who accepted.

“I think it was one of the most rewarding things in terms of marketing, seeing the reaction as people took out their phones and got this invitation,” McKirdy said. “This drove a lot of awareness and buzz around our activation. We even had Grailed users going out and taking fliers and doing some guerilla marketing of their own.”

For Grailed, these offline events are less about driving direct revenue, although items from the platform’s inventory were on sale, and more about long-term audience-building. Many of the people who came through the pop-up had not heard of Grailed before, which Gupta said was part of the goal. Paris Fashion Week is all about exclusivity, and Grailed wanted to create something that was open and free.

“We are providing access to rare inventory that people don’t get to see every day. We had a $5,000 jacket there. Bringing these amazing things to people in an accessible way was the goal,” Gupta said. “The second thing is building up the community. When people are interacting with the site in a digital way, that’s one thing, but to interact with each other in a physical way, that’s what we really wanted. One of the biggest wins that came out of the event was people who met on the first day of the pop-up and came back together as a group later in the week.”

Because Grailed is primarily an online platform, it is harder for the company to build strong community connections between customers and its site, as well as between customers. In this instance, AirDrop served as a way to bridge the digital and physical experiences of the platform together.

“We have comments on listings, and we have messages between users, but no public message board or anything like that yet,” Gupta said. “But because its a style-focused marketplace, it drew people who like to talk about things. People were meeting, and the community grew organically and we’ve been trying to encourage the growth of the community.”

The pop-up at Paris Fashion Week is also a prelude to Grailed’s future retail plans, which are ambitious. Gupta said that the showroom in Paris, along with the past pop-ups and meet and greets held in Los Angeles and Toronto, are all testing grounds for when the company inevitable opens its own physical stores.

“We are definitely planning on having a physical location in the future, in New York, for sure,” said Gupta. Though he declined to state a timeline for a standalone store. “Our own physical experience has to be more than just shopping, it has to be a great place to shop, of course, but we want to create a space where people can meet. That has been validated by these events [in Paris and Los Angeles] and will be a huge part of it.”