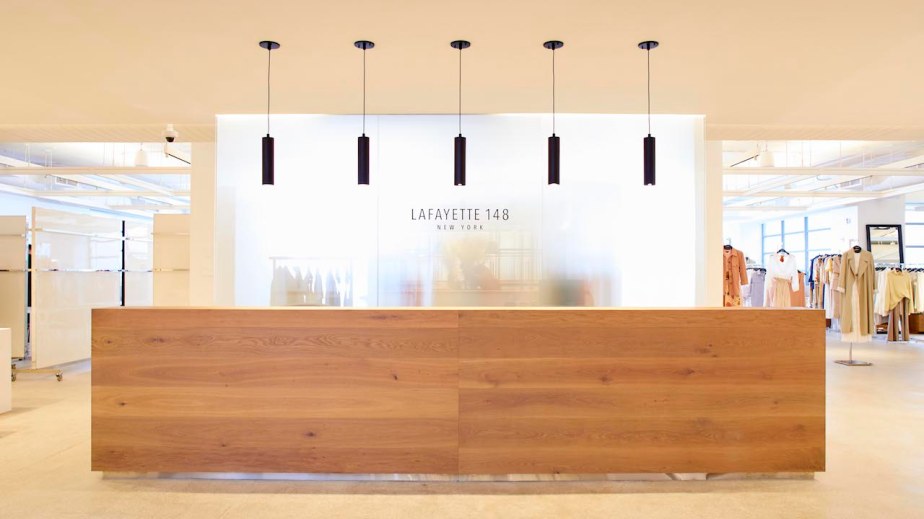 The Brooklyn Navy Yard could be fashion’s next big thing.

According to Deirdre Quinn, CEO and co-founder of Lafayette 148, the company is pocketing two-thirds of the rent paid while at its namesake address (148 Lafayette). At the time, NYC operations were stretched across seven floors, as well as a separate SoHo warehouse and an 80,000-square-foot space in the Brooklyn Army Terminal. It’s been busy putting that money to use, opening two stores since late last year, at Tysons Gallery in McLean, Virginia and South Coast Plaza in Costa Mesa, California. Plans are underway for a sixth U.S. location, set to open this fall on NYC’s Madison Avenue.

Around moving day, the company also relaunched its website to better tell its story, and it introduced a revamped design for its physical retail spaces. Aside from its U.S. stores, those include pop-up shops and 16 permanent stores in China, and several shop-in-shops in American department stores, like Bloomingdale’s 59th Street store in NYC. Replacing the stores’ former black-and-white design is a look reflecting the clean, white aesthetic of the brand’s showroom, located in the new home office.

“The decision to move the company to the Navy Yard was absolutely about reinvesting in the business,” said Quinn. “A company constantly has to reinvest and reinvent. We’re privately owned, and we save to do just that.”

Building 77 is located at the center of the 300-acre Yard, which is on the East River just south of Williamsburg, Brooklyn. The WWII-era building underwent a $185 million renovation that wrapped last year, transforming it from an office and storage facility to a hub for urban manufacturing. Other fashion brands that have since moved in include contemporary label Nanette Lepore and Catbird Jewelry.

A new home
Lafayette 148 occupies all of Building 77’s 14th floor, signing a 15-year lease for the 70,000-square-foot space. Quinn said it required an initial $10 million investment to get the floor move-in-ready.

In addition to the showroom, a tour of the sprawling office reveals a bright kitchen, a private showroom café (which hosted dozens of department and specialty store buyers within the last month) and seemingly countless departments, including production, wholesale and retail, the latter of which manages DTC sales. There’s an airy space for pattern-making, where seamstresses make 3,000 garments a year, and a large sample room, showcasing the brand’s 58-size range, including missy, petite and plus sizes, and unique fits for the Asian market.

An area dedicated to design, led by creative director Emily Smith, is currently filled with inspiration boards for spring 2020. The department includes eight designers for different product categories, which expanded three years ago to include shoes and accessories not sold in department stores. Because the company is vertically integrated — a common goal for newer brands seeking more speed and autonomy — it can produce as few as one of each style, with a lead time of just three weeks.

The marketing area is full of imagery intended for national and local ads, as well as direct-mail catalogs, which soak up the largest advertising investment. The company ships 10 different print catalogs, totaling 5 million copies, to prospects (65 percent) and customers (35 percent) every year, driving business to its website and wholesale partners. Ads on Facebook and Instagram also account for a large bulk of the budget, with video becoming more of a focus. All creative and photography is the work of in-house employees, who’ve already taken advantage of photo-worthy locations in the Yard and the brand’s showroom.

To better facilitate creative work, Lafayette 148 also scooped up 20,000-square-feet of space on the eighth floor of the building. It will be used for still-life photography, as well as storage of samples and archive pieces. In the near future, it will also house a company store.

On par with industry trends, wholesale partners are increasingly requesting exclusives, which the brand often answers with unique colorways of styles. It’s also been approached about doing a private-label product for partners, though Quinn has passed every time.

“I spent a lot of my career manufacturing clothes for other people, and once we started Lafayette, we’ve taken all of our energy and put it into one brand,” said Quinn. “There are some companies that are only in the catalog business, or only in the wholesale business. We don’t have time to make clothes for other people, and we’re in a nice position to not have to do that.”

Department store closures have not had a big effect on Lafayette 148 — the biggest blow to date has been the closing of Lord & Taylor locations, which once accounted for 2 percent of the brand’s sales.

The company currently has its sights set on global expansion and is seeking out international retail partners in London and France. It also plans to open more of its own stores abroad.

The vertical blueprint
Considering the brand’s new digs, its second office in Shanghai and its owned factory in Shantou, China, Lafayette 148’s operations — excluding its retail stores — now take up 500,000-square-feet of property.

Completed in 2008, the brand’s 240,000-square-foot factory in China — which says “Lafayette 148” in braille across its exterior — features 12 stories of manufacturing, with each floor dedicated to a different product category. The cutting room is an entire floor, and there are 1,200 sewers on staff. NYC employees make a total of 250 round-trips to the factory each year, with designers traveling there four times a year to compile seasonal collections. Outside of visits, communication is primarily through Skype, WeChat and the company’s intranet, Discover.

“It’s very European to own part of the factory or all of the factory; it’s not an American thing,” said Quinn. “But controlling the quality, controlling the fit and getting the customer an amazing value is crucial. You can find a good and bad factory in any country, so we pride ourselves on: ‘It’s made in Lafayette.’”

Overall, Lafayette 148 has seen double-digit growth year-over-year for the past three years. In addition, it’s grown every year in its 23-year existence, outside of 2008 — at that time, it decided to answer the rocky market by launching its direct-mail catalog business, which turned things around. In 2018, it did $200 million in sales, which Quinn owed to the brand’s control of its manufacturing and direction.

Though 16 of the brand’s 21 retail stores are located in China, stores are the brand’s only sales channel in the region. The U.S., where it also has wholesale partners and a catalog business, is a much larger market, said Quinn.

Right place, right time
When Lafayette 148 moved from SoHo to Brooklyn, all of the brand’s 202 employees came along, several of whom have been with the brand since the beginning.

Quinn said she signed the papers for the new space after viewing it once, largely sold on the views via the balconies at every corner, one of which overlooks Brooklyn Grange, the largest urban rooftop garden. She and King Chong, head of VIP relations, quickly befriended their neighbors, including many of the 50 or so artists and 50 photographers working in the Yard. The artists now have 15 pieces decorating Lafayette 148’s hallway, each for sale and marked with its title and creator’s name.

“Our campaigns always tie back to art, artists, architecture,” said Chong. “That’s a big message for us, so it’s a great fit.”

The Brooklyn Navy Yard is booming. FIT, where Quinn is on the board, is set to soon move its innovation center to the Yard, in partnership with Lafayette 148. (The company currently employs 26 FIT grads.) Aside from artists, the Yard has also welcomed companies focused on innovative technologies, like robotics. In addition, there’s a distillery, a film studio, a vinyl company and a new location of popular brunch restaurant Russ & Daughters. WeWork just bought one-third of one of the buildings.

“We’re kind of like the turtle of the industry,” said Quinn. “We’ve been at the right place at the right time these last couple of years, and we haven’t lost focus of where we are or where we’re going. The timing is in our favor right now.”