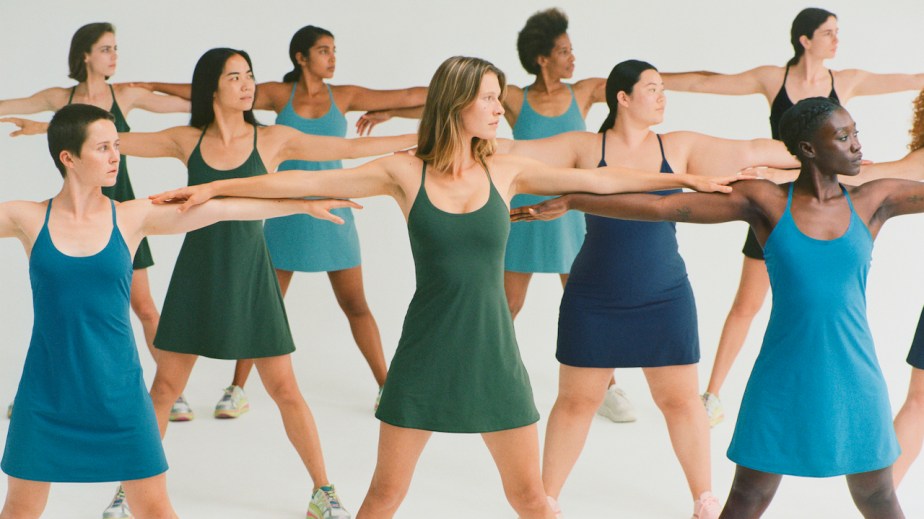 On Thursday, Outdoor Voices relaunched its cult-favorite $100 exercise dress in three new colors in the brand’s largest marketing campaign to date. The dress, which first launched in May 2018 — and sold out within a week — wasn’t originally designed to be a hero product for the brand, but it drove unprecedented customer demand. Customer feedback via social media and community events led to slight changes in the product, like a transition from an attached underwear brief to shorts, complete with a phone pocket, launched fall 2018. That style also sold out within a few weeks. The brand declined to share specifics around sales.

“Since the launch, the exercise dress has been our highest-rated, most-requested, best-selling and most iconic style. It’s become a hero product for us, and we’re excited to be able to offer our community technical apparel that allows them to reimagine how exercise comes to life,” said Ty Haney, founder and CEO of Outdoor Voices.

Often, young direct-to-consumer brands are finding their hero, or best-selling, products are those they’ve designed to fill holes in the market. For Naadam, it’s been its $75 cashmere sweater, a somewhat luxury product at an affordable price point. For Cuyana, it’s a soft leather tote bag that also was more affordable than most on the market and could be customizable through monograms.

When Cuyana launched in 2011, “you couldn’t really find a soft leather tote in the market that wasn’t Celine,” said Karla Gallardo, co-founder of Cuyana. “It quickly became the biggest seller for our brand and became the key to growth in the beginning.” Gallardo said the company has sold, “hundreds of thousands of totes,” since it debuted in 2012.

For Outdoor Voices, the exercise dress is another example of a product that is filling a white space in the athletic apparel market. The closest style is a tennis dress — Under Armour has one for $75 and Adidas sells them for $120. It’s also tapping into a larger trend where men and women are purchasing activewear for casual uses, not necessarily for working out, said  Alexis DeSalva, senior research analyst of retail and e-commerce at Mintel.

“The dress is a prime example of the type of clothing women are increasingly seeking out. They want things that are functional, stylish and versatile. It’s really filling a gap because fitness apparel tends to mostly consist of pieces that are separates, like leggings and a tank. This is an item that stands out from anything else that’s in the market and is really helping elevate the customer’s style,” said DeSalva.

For the relaunch, on Thursday, Outdoor Voices hosted a 1,500-person dance class for influencers, media and customers at Lincoln Center, where everyone was outfitted in one of the dresses. The brand promoted the event through Instagram and email. There, the company captured video footage and photos that will be used in upcoming marketing pushes throughout the rest of the year. The brand declined to share its marketing spend for the campaign but shared the focus for the exercise dress will be outdoor, paid social and email marketing.

While Outdoor Voices is using its hero product as the focus of its upcoming marketing, other brands have found that, after a while, they don’t really need to market their hero product anymore. For Naadam, sales of its $75 cashmere sweater — launched in 2018 — have been instrumental in helping the brand grow, said founder and CEO Matt Scanlan. But the brand has increasingly focused less on promoting that sweater.

“After a while, the hero product can be in the background. You wont see a lot of $75 sweater marketing, because it’’s going to continue to just market itself. It gathers that word-of-mouth marketing, and then all the other products can take those marketing dollars,” said Scanlan. When Naadam had its store dedicated to the $75 sweater earlier this year, one of the greatest challenges was keeping up with customer demand and keeping the sweater in stock.

While hero products can be great tools to grow a brand in its early stages, Commando founder and CEO Kerry O’Brien said brands should always think beyond the hero product. For Commando, it started off selling underwear, but eventually focused on developing better leggings and slips, which then started selling more and became additional hero products for the brand.