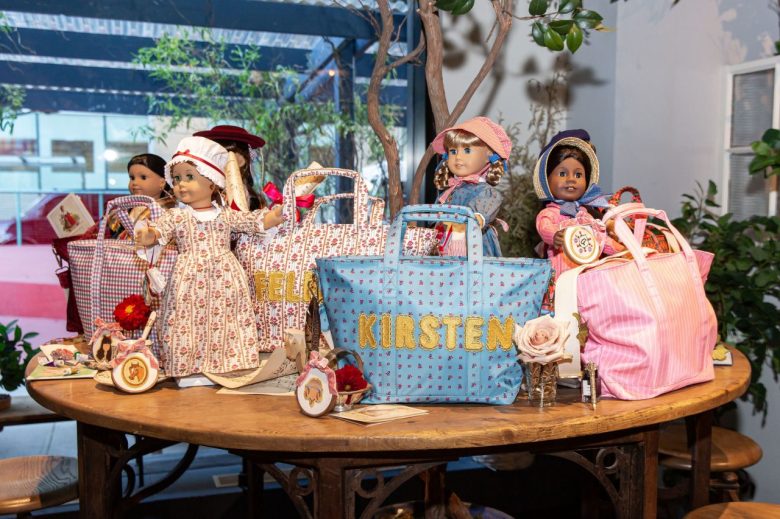 “American Girl dolls are instantly recognizable, whether you had one growing up or knew someone who did. The nostalgia is strong, yet specific. I also just love the big inside joke of it all. Like, if you get it, you get it, and if you don’t, you don’t,” Harry Hill, influencer (58,000 followers on Instagram) and noted American Girl aficionado, told Glossy.

Hill was one of many influencers to attend an October event at Maman celebrating the launch of a collaboration between iconic American Girl dolls and Stoney Clover Lane, the makers of the incredibly Instagrammable, personalized pouches. The collection borrowed famous American Girl prints to make Stoney Clover Lane pouches and bags, which can be paired with patches of the dolls’ characters.

The partnership was a “right time, right place” collab, according to Kendall Glazer, co-founder of Stoney Clover Lane. At age 30, Glazer is at an age where American Girl is a fondly remembered element of childhood. “We were obsessed. We begged my parents to go on a trip to Chicago just to go to the store,” Glazer said, referring to herself and her sister and co-founder, Libby.

Still, the current collaboration might not have made as much sense had it not happened to come to fruition in tandem with the 35th anniversary of the launch of the original dolls: Samantha, Molly, Addy, Kirsten, Molly, Felicity and Josefina. “My one complaint is that one Miss Kit Kittredge [another American Girl doll familiar to ’90s babies] was not part of the collection! I know she’s not technically one of the OG dolls, but still. Her skirt pattern on a clutch? To die for!” Hill said.

This timing allowed the collaboration to focus on dolls that felt personal to Stoney Clover’s audience. “The way that this would feel really authentic was to completely go back to that nostalgia, to the original prints, so the patches would look like they could have been something you saw in the catalog in the ’90s,” Glazer said, “Our customer, for the most part, is the person who grew up with American Girl. [They’re] in their 20s to 40s,” Glazer said.

Though 30-year-olds don’t play with dolls, American Girl remains popular with the now-grown millennial demographic. It’s fun to reminisce about which Girls you had — I had Josefina. Although, it should be noted that the dolls were $100, so it was a privileged bunch of 6-year-olds who got to have their own. Before I spoke to American Girl’s vp of brand management, Chris Schick, I emailed my uncle, who bought me my first American Girl doll. “I very much remember giving you the American Girl doll.  I was excited because you were so excited! I don’t remember ever enjoying gift-giving as much as that,” he replied. It illustrated the fervor around the dolls circa 1997. Articles like 2016’s “American Girl Dolls Ranked By Betchiness” play on that exact nostalgia. In 2020, Betches published “How The American Girl Dolls Would Spend Quarantine.”

For American Girl’s part, the brand tries to balance the fact that, ultimately, it is a children’s brand, while still nodding to its older fans who have found comedy in their childhood nostalgia. “It’s really a rite of passage for a little girl,” Schick said. “It’s not just a doll. It’s an entire story. With American Girl, there are three things that need to happen for us to be successful. The first is the story, and then it’s brought to life by the product. Then, finally, it’s being able to have an experience, [like at the store,]” Schick explained. The American Girl team has to carefully manage the humor in the memes, articles and social content about the brand. “There’s a fine line. We never want to do anything disparaging against our characters or anything along those lines,” Schick said.

“As a content creator, you get invited to so many different exciting events,  but this one just provoked so much nostalgia because I loved American Girl Doll so much,” said Audrey Peters, (a content creator with 406,000 followers on TikTok), of the Maman event. “On a deeper level, it reminded me that, if my 13-year-old self who loved American Girl Doll then knew what I do now, she would be over the moon.”

The collaboration dropped on October 22 and sold out of much of its stock in fifteen minutes. Pouches featuring the most popular dolls, like Samantha, saw the greatest frenzy. My friend Ryan Pachuta, 28, posted about his own order on his Instagram stories and then DMed me, saying, “​​I mean, I spent close to $300, which makes me ill. But the nostalgia was too strong.”

Cozy attire is not going anywhere just yet. Case in point: Offhours — known for its “homecoat,” which is essentially a wearable comforter — just launched at West Elm. The partnership entails a new colorway for the homecoat called Renaissance — it’s a heathered oatmeal with pops of green, terracotta and mustard. It also includes coordinating quilts, a first for the company. Yet another excuse to never leave the house. Shop it here.

Influencer-turned-founder Lindsay Silberman’s brand Hotel Lobby Candle continues to have a devoted cult following. Silberman announced her brand’s holiday collection (made up of three candles: Holiday, Cabin and Chalet) on October 27. Now, Cabin is the only one still in stock. It features notes of smoked oud, Orris Root, forest wood and peppercorn. Shop it here.

Trend of the week: Lug-sole boots

Now that it’s getting colder and we’re actually leaving our houses, it’s time to sport one of fashion’s best, most versatile styles: boots. And right now, it’s all about boots with a lug sole.

“We love that lug-soled boots are having such a moment right now. We are coming out of a time when everything was very casual, and lug-sole boots are the perfect balance between fashion and function,” said Megan Papay, co-founder of footwear brand Freda Salvador. “We love wearing them with a relaxed wool suit, long dresses and, of course, denim.”

The style makes for an effortless but elevated look and puts an “I am a badass” bounce in every step. This season, there are countless pairs to try out, from Freda Salvador’s Felix loafer-esque boot Loeffler Randall’s patent croc-embossed Bridget Chelsea Combat Boot to Sam Edelman’s ivory pair. Below, a few sure to elevate even your sweats.

Valkyrae’s RFLCT shuts down less than two weeks after launch

Hyaluronic acid is popular on TikTok — but this time, it’s for hair

Olive & June Is Getting Into The Press-On Nail Game

How I Shop: Rickey Thompson