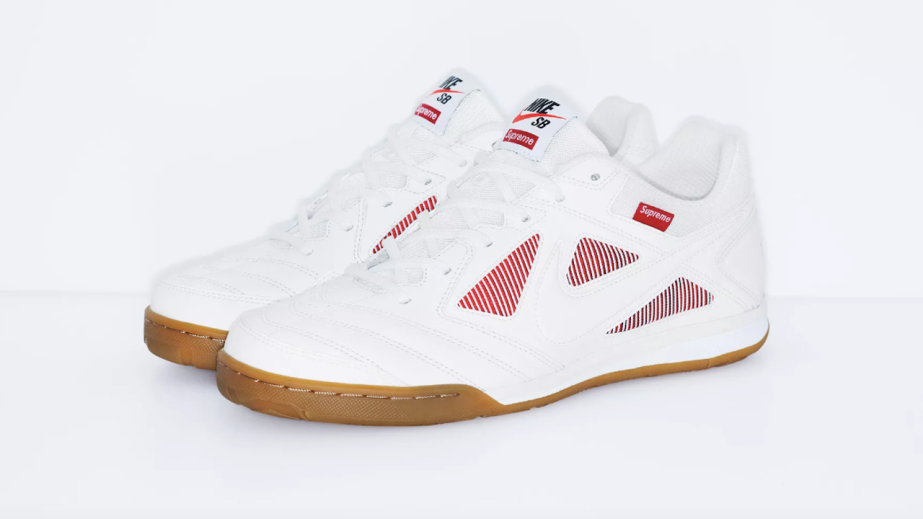 Glossy 101: The allure and pitfalls of a logo slap

Some fashion collaborations are a perfect match, bringing together minds that work seamlessly together like Virgil Abloh and Nike or Supreme and Louis Vuitton. But there’s a term for a collaboration that is just two names lazily thrown together on a product not much different than one already on the market: a logo slap.

A logo slap is exactly what it sounds like: One brand, designer or company slaps their logo on a product from another company and calls it a day. Some examples include DKNY’s collaboration with Major League Baseball, Bape’s release of styles featuring “Wreck-It Ralph” and the recent collaboration between Kith and Estée Lauder, which is just pre-existing Estée Lauder products in Kith-branded packaging.

Even collaboration legends Supreme and Nike are not immune to the allure of the logo slap. The Supreme x Nike SB Gato sneaker released last year is basically identical to the original Nike Gato, except for a small red Supreme box logo on the side. Streetwear designer Jeff Staple said his upcoming collaboration with Cole Haan is very different, as he and Cole Haan designers came up with something entirely new together.

So what is the appeal of a logo slap?
The appeal is that collaborations are successful. People see the conspicuous hype that an Off-White x Nike collab generates and want the same for their own brands. What they do not see is the years of work that likely went into those collaborations.

“People have seen the power of collaborations and the positive impact they can have, but unfortunately, people look at the end result rather than all the work that went into it behind the scenes,” said Adam Meek, global vp of product for Sperry, which has in recent months focused in on long-term collaborations with select partners like sustainable streetwear Noah. “People have looked at collaborations as just a means to the end goal of growth, rather than doing something that genuinely showcases the best of both brands. To use Noah as an example, we talked for a long time to find the common threads between us before we began.”

Sperry’s collaboration with Noah took two or three years of gestation and ideation before it actually came out. While Sperry did not share specific numbers on the success of the collaboration, past shoes released by Sperry and Noah have sold out and the two have worked together continuously since 2016.

“Typically, it starts with an introduction — just an informal chat, going to their office and getting to know them,” said Meek. “Then you have a more formal meeting, discuss the strategies of the brand, see where each party is trying to take the brand. Then you ideate, talk about how things could work. Then you start to move into sharing ideas and designs and drawings, then samples. Then you loop in the storytelling and messaging, the packaging, the launch plan. It’s usually between one or two years for it all to come together.”

What are the dangers?
For one, it is not going to get the kind of positive reception that more considered collabs will. Beyond that, the inauthenticity of a logo slap will be painfully obvious to many consumers and can damage the brand.

“Younger customers especially can tell right away if it’s not authentic,” said Kate Minner, CMO of Sperry. “The genuine authenticity is what you have to establish first. That’s the most important thing for a collaboration.”

How can a brand avoid a logo-slap situation?
One way would be to slow down and pick a collaborator that genuinely provides something itself cannot. Some of the most successful collabs have been between brands and designers from completely different worlds but that have found common threads between them. Again, Louis Vuitton and Supreme are a great example. The two are far enough apart, coming from the different worlds of streetwear and luxury, that they enrich each other while also sharing a partially overlapping audience and similar strategies around exclusivity.

“We’re keen on bringing new products to a broader audience, and we want to work with people who we think can help us reach a new audience,” said Alexandra Waldman, co-founder of Universal Standard which just launched a collaboration with luxury brand Rodarte. “Rodarte is very different from our aesthetic, so we could let our consumers dabble in super high fashion, and [Rodarte] could reach a totally new audience.”

“With collaborations becoming so commonplace these days, there absolutely are those that truly improve the standing, perhaps both financially and brand positioning-wise, of both parties involved,” said Vic Drabicky, CEO of creative agency January Digital. “For example, when Supreme and Louis Vuitton partnered, LV was able to immediately gain streetwear credibility, while Supreme was able to elevate their brand to be more luxury.”