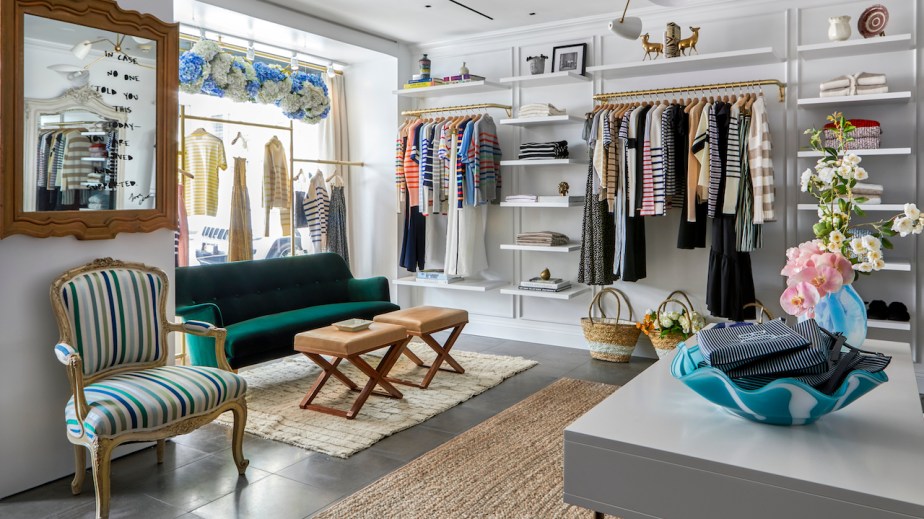 Physical retail is emerging as the customer acquisition channel of choice among young brands laser-focused on thoughtful expansion and early profitability.

On Sunday, La Ligne, a three-year-old direct-to-consumer fashion brand, opened the doors to its first permanent store, on Madison Avenue in NYC’s Upper East Side. Launching the 650-square-foot space, modeled after a Parisian apartment, was a big step for the brand, according to founders Valerie Macaulay, Molly Howard and Meredith Melling. They did their due diligence before taking the plunge.

La Ligne, which has wholesale partnerships with Nordstrom and Net-a-Porter, first tested owned physical retail through pop-ups within the retail stores of fellow fashion brands, including Jenni Kayne and Theory. “Just being in a physical space, we saw great response,“ said Macaulay. “But we didn’t feel we were in a position yet to open a full-scale store.”

Instead, about a year and a half ago, the brand started hosting trunk shows in the homes of customers. As it’s been an effective sales driver, the owners plan to keep this strategy intact to reach shoppers in markets where physical retail is not yet an option. On Wednesday and Thursday, they’ll host shows in St. Louis.

Howard said she’ll consider the new store a success if she and her co-founders renew its 14-month lease. The founders chose the location based on its proximity to current La Ligne shoppers. The brand’s most successful trunk shows have been held in the UES, and its average order value is highest in the area. What’s more, it has great foot traffic. About 50% of visitors in the first couple of days knew the brand, while the others were discovering it for the first time. “The store is a marketing tool, 1000%,” said Howard.

Versus online shoppers, who gravitate toward classic pieces, Macaulay suspects that shoppers in-store will be more open to interesting styles as there’s less risk when they can be tried on. Even so, in-store merchandise will mirror what’s online, with the exception of select exclusives catered to the local shopper. The store will see the site’s weekly drops a day early.

“Customers just being able to touch and try-on will inevitably lead to a lot more qualitative, in-the-moment feedback than we see online,” said Macaulay.

Within the year, the founders plan to open additional stores, with the downtown NYC and L.A. markets among the top contenders.

To promote the opening, the brand relied on social media and word-of-mouth, which is true to form. Its first year and a half in business, it did zero advertising, though has since started advertising on Instagram and Facebook. The brand has been profitable since last year.

“As a brand, we don’t spend much money on traditional advertising,” said Howard. “We look for more organic, creative ways to market our product, as opposed to just like spending on customer acquisition. This is something that DTC brands struggle with: They overspend and overmarket to grow their top line. I’m more focused on margins and controlling our bottom line. It’s important to me to grow a healthy business, and every dollar we spend is a conscious decision that looks at the outcome overall.”

Four-year-old DTC jewelry brand AUate, on the other hand, took an omnichannel approach out the gate, opening a store in sync with launching its e-commerce site. It now has permanent stores in NYC, Washington, D.C. and Madison, and a Hamptons pop-up planned for the summer. All are positioned in high-traffic areas and feature the brand’s signature open displays, allowing pieces to be tried on without assistance. Currently, 80% of sales are made online, supported by a try-on-at-home program called Curalate.

Like Howard, AUrate co-founder Bouchra Ezzahraoui sees stores as important sources of qualitative data: The brand’s store associates provide daily reports with information including who is shopping, what styles they’re liking and disliking, and what they’ve communicated they want to see from the brand, from marketing to product. “It’s a lot of rich data we would never be able to get online,” she said.

In addition, she sees the stores, which have been profitable, as “free marketing channels,” where the brand can offer consumers an experience and chance for discovery.

In the next 12 months, AUrate plans to open five more stores, including an L.A. location.  The following year, it will double its retail presence.

“We don’t want to over-expand, but each store is basically another acquisition channel. Each of our stores is profitable, and digital channels have become much more expensive, so why not?” said Ezzahraoui.”The extent to which we can stay true to the brand is the only limitation.” — Jill Manoff

The RealReal expands its physical footprint
After opening stores in its home state of California and another in SoHo, New York, The RealReal announced today that is opening a third store on NYC’s Upper East Side. Brick-and-mortar locations are becoming a crucial necessity for resellers as they grow and expand. I spoke to Mike Groffenberger, head of retail at The RealReal, about considerations that went into the new store and the company’s retail strategy.

Why New York for your third store instead of expanding to a third city?
We’re growing in NYC to support the strong demand we’ve seen for both shopping and consigning since opening TRR SoHo a year and a half ago.

Are more stores on the way?
Right now we’re focused on the opening of Madison. It’s not a signal of any strategic pivot toward a greater brick-and-mortar presence, as much as meeting demand from our members where it suits them best.

How does this store compare to your others?
The Upper East Side store will serve as an uptown complement to our SoHo flagship Store. It’s a smaller-format store, roughly half the size of SoHo, and L.A. is double the size of Soho. It features a curated mix of women’s ready-to-wear, handbags, fine jewelry, watches, art and home pieces, as well as a Luxury Consignment Office. It’s a new format that bridges the gap between our Luxury Consignment Offices and our flagship stores, bringing together an expanded assortment of expert services and a tailored selection of luxury goods. — Danny Parisi

The Fenty Effect: How 1-year-old Savage x Fenty has impacted the lingerie market
It’s been an eventful 12 months for Savage x Fenty, Rihanna’s lingerie brand created in partnership with TechStyle Fashion Group. After launching on May 11 last year, with a total of 40 styles across four collections, the line sold out within a month. It has since been featured in a New York Fashion Week show, sold in three nationwide pop-ups and linked with Asos on a wholesale partnership. Along the way, according to a report by retail analytics company Edited, the brand has also been changing the lingerie landscape. Below, a breakdown of the report’s key findings:

-Since the launch of Savage x Fenty, there’s been a 34% increase in the number of size-inclusive lingerie styles across the U.K. and the U.S. Fenty offers bras sizes 32A to 44E, Victoria’s Secret sells 30A to 40DDD.

-Boosting the brand’s engagement are the fact that Rihanna is featured in campaigns and shares the images on social media. What’s more, there’s the brand’s Xtra VIP membership program, providing perks like exclusive deals and products, and early access to new drops. Neither Victoria’s Secret, Aerie nor ThirdLove have membership programs.

How dependent is the brand on Rihanna’s star power?
Rihanna’s own Instagram following is at 70 million, while the Savage x Fenty account is at 1.6 million. Rihanna’s posts from her account let her brand reach a wider audience. There’s a direct correlation between the products Rihanna posts and sales activity. For example, Rihanna wore and posted a yellow underwear set in the brand’s Neon Psychedelic campaign, launching April 1. A majority of the style sold out within two weeks, compared to the rest of the collection which saw majority sell out within one month.

Has the brand seen a halo effect, in terms of Fenty makeup’s popularity?
The popularity of Fenty makeup cemented Rihanna’s aptitude for business, proving she wasn’t just another celebrity attached to a brand. It provided a launching platform for Savage x Fenty, and a year later, the lingerie brand has proven it can stand on its own. — Jill Manoff

Hill City’s Noah Palmer: ‘We’re building a really strong community’
“We have a wear tester program with over 500 people. The idea is that we give out product to these different cohorts of guys, and it’s product that’s either in development or already launched, and in return we get really robust and thorough feedback.”

‘This is an evolution’: Fitness brands are broadening their wellness focus
“Fitness is one aspect of our woman’s and girl’s full lifestyle, and we are a highly technical apparel brand, but we also think about how moments like self-care, meditation, beauty, travel and career can be incorporated.”

L’Oreal USA brings back its accelerator program
“Being digitally native and having that expertise is an asset for all beauty companies right now, so we want to partner with experts who know that environment well.”