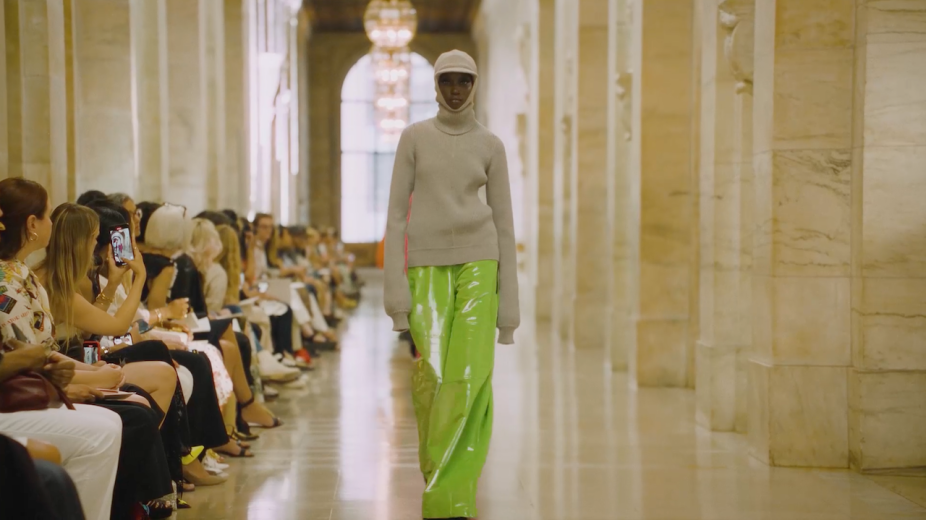 On Monday evening, Marc Jacobs hosted a runway show for the first time in 16 months. For the brand’s designer, it served as a homecoming and a creative release. For fashion fans, it spelled go time for the industry at large.

“Marc is a showman at his core and loves to do live events,” said Michael Ariano, Marc Jacobs’ global head of press. “Other brands approached the [pandemic’s roadblocks] by creating fashion videos. But to [best] communicate Marc’s vision, we waited. We wanted to be the first ones to do a major fashion event in New York, when we were allowed to do one.” The show was pulled together in two weeks.

Among the 100 attendees were fashion insiders Vanessa Friedman, the New York Times’ fashion director and chief fashion critic, and Vogue Runway director Nicole Phelps. “The editors hadn’t seen each other, and many hadn’t seen their co-workers,” Ariano said. “It was like a strange reunion of the industry that was marked by a collection.”

Creative agency Matte Projects, which produced the show’s corresponding film, was approached by the brand the week prior. The ask was a “cinematic” representation of the show, said Matt Rowean, CCO and partner at Matte Projects. Spotlighting the looks’ dramatic silhouettes, by showing them from both the side and the front, was also key, said Ariano.

“We wanted a higher quality video asset because it was going to be widely distributed to people who would normally be at Marc’s show, but couldn’t be there,” said Ariano. “Tons” of guests typically travel from Europe and Asia to Jacobs’ shows, and 600 to 800 guests is standard, he said.

The show was projected in real-time on Bergdorf Goodman’s Fifth Avenue store facade, and the retailer’s top customers were invited to join press members on site. This fall, the show’s featured collection will be sold exclusively through Bergdorf Goodman. “Marc was looking for a new way forward that made sense after Covid,” said Ariano. “The Bergdorf partnership allows for an appropriate way to reach the customer who buys the clothes, without creating unnecessary inventory [as with see-now-buy-now].”

For its part, Matte Projects has been at the ready for fashion brands, as they slowly deem their customers ready for campaigns and experiential activations. It was already producing campaigns for Versace, which has been a client for two years, last summer in Milan. “We’d work with full remote teams but send our creative director, and they’d have to quarantine for two weeks before and after [the job] — basically spend the whole summer there,” said Rowean. Matte also produced Versace’s fall 2021 lookbook, released this week. “Certain brands have continued to activate” on a large scale throughout the pandemic, he said.

But those brands are the exception. Most of the bigger brands “were too scared to communicate” over the last year, he said. “The social climate was changing on a daily basis, and it added this chaotic layer. Brands would say, ‘We don’t know exactly when this [activation] is going to happen, but we want to do it. But is it safe to do it, or is it tone-deaf?’”

It was fairly recent that the floodgates began to open for big fashion projects. After cutting jobs and salaries in the first quarter of 2020, Rowean said hiring is now his No. 1 priority. “We have 40 active clients and a full-time staff of 32,” he said. Campaign and content-based projects started to bounce back in August 2020, and finally in April 2021, experiential requests ramped up.

“Our experiential [business] went to zero all last year,” he said. “But we’ve seen a tidal wave of briefs from old and new clients for the second half of the year and we’re planning three or four events that will be happening over the summer.”

He owed the upward trend to vaccines rolling out and NYC feeling alive again. What’s more, he said, brands want to use budgets that had been tabled for months, plus there’s an overall desire for human connection. It’s also becoming more socially acceptable to host an event. Influential brands like Marc Jacobs leading the charge certainly helps.

Of course, other well-known designers have hosted fashion shows since the start of the pandemic. Jason Wu and Rebecca Minkoff presented collections on the rooftop of NYFW headquarters Spring Studios in September 2020 and February 2021.

“Now everybody’s really eager to start doing things,” said Rowean. “And brands are releasing to the world several projects that we’ve worked on. So for us, there’s a flurry of activity.”

Matte manned the projection of Marc Jacobs’ video onto Bergdorf Goodman’s exterior, which kicked off on Monday afternoon with a live countdown to the livestream. The video of the show played until midnight.

For Matte, the show overlapped with another project for BG: producing its first major campaign since the start of the pandemic. Titled “Love Letters to New York,” it kicked off last week with BG releasing its own letter to the city across its marketing channels. Celebrities including Debbie Harry and Christy Turlington will share their own love letters to NYC on BG’s social channels throughout the course of the campaign. Matte was asked to create “a throughline, from an experiential perspective,” which it translated via a window display, a projection on the store’s facade, and an in-store installation featuring a writing desk and mailboxes for shoppers to submit their own letters. On-site QR codes are featured to encourage interaction, versus specifically drive sales. “Our collective goal was to create a campaign that didn’t feel commercial,” Rowean said.

And next week, Matte will shoot another Versace campaign.

But it’s not business as was usual in 2019. For starters, for fashion fans and insiders, there are new safety protocols to consider. Marc Jacobs required that all show attendees and crew provide proof of vaccination along with their RSVP.

Proof of vaccine is the new ask across the board, Rowean said. “And you still need to keep the crew-member count down. Events are more regulated than ever.”

Even so, brands are definitely zeroing in on experiences. Rowean predicted that September, around fashion week, is when more brands will go big on events. An international audience should start to return and people will be moving back to the city.

But whether that means flooding the fashion calendar with runway shows remains to be seen. For his part, Marc Jacobs is rethinking his approach to most everything, including showing collections. “He doesn’t have any interest in: ‘We have to go back to the way it was,’” said Ariano. “He’s more focused on: ‘What can we do that’s right for what I’m creating right now, and what’s best for the company?’ Sometimes that aligns with fashion week, sometimes it doesn’t.”

On Thursday, American Express released May 2021 spend data for 2,000 consumers with a household income of at least $70,000. The results showed that people are seeking out experiences — specifically, those that are better than basic.

For example, 80% of millennials said they’re now more interested in shopping at pop-ups than standard retail stores. And nearly half of respondents said they’re willing to spend more on a premium vacation for their next trip than they were prior to the pandemic.

On a related note, one-third of respondents said they now enjoy dressing up for social events more than they did prior to March 2020.

How Aeropostale leveraged TikTok to make a comeback.

Traveling showrooms are trending among brands including Cuyana.