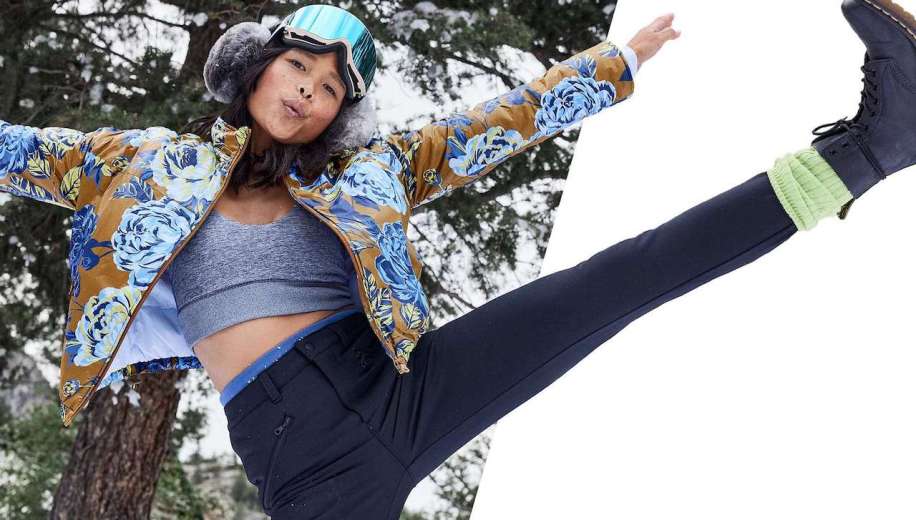 This week, an in-depth look at skiwear’s glow-up.

So much for après-ski style.

As the world heads into its third year under the dark cloud of the pandemic, cabin fever has officially set in. Though many people are deeming indoor destinations off-the-table and winter weather has officially arrived, the desire to go out remains strong. As a result, skiing has become an increasingly popular pastime — and sales of its unofficial uniform are booming. Fashion brands are now rushing to answer the demand for sporty puffers, ski suits, ski pants and goggles.

“2020 was all about loungewear. And in 2021, everyone got a little overambitious and bought going-out clothes and for the return to normal,” said Madison Semarjian, founder and CEO of the 2-year-old Mada shopping app. “Now, we’re back to activewear. The 2022 look is elevated loungewear you can wear in the cold. Skiwear has become the ‘it’ girl uniform, even for people who don’t ski.”

Semarjian said that, since fall, Mada’s skiwear sales have been up 400%. What’s more, people are “eight-times more likely to buy a skiwear outfit than another winter outfit featured on the app.” As a result, the company has overhauled the ”Featured Outfits” section of its app to exclusively feature skiwear. The plan is to keep it that way for the foreseeable future, only updating it when new ski styles become available.

Think of the trend as winter’s take on fashion’s pandemic-fueled love affair with golf and tennis. As playing sports has become a go-to fall-back plan, brands have latched on to the opportunity to put their fashion spin on the limited, often lackluster apparel options on the sporting goods market. At the same time, many are fulfilling their promise of being a lifestyle brand, able to outfit their customer for every aspect of their life.

To go there, brands are linking with the experts in the space for collaborations, meeting the shopper where they are via ski resort pop-ups and launching dedicated ski shops on their e-commerce sites. The trend is being accelerated by a number of factors, from the wardrobe in “House of Gucci” and the current Princess Diana style fandom to the upcoming Winter Olympics and, of course, fashion influencers.

According to a report released on Thursday by payments company Afterpay, consumers spent 10-times more at ski and snow merchants in the fourth quarter of 2021, compared to 2020. And that’s set to increase, as more brands show up in the space.

Expanding into the category while remaining true to their brand DNA was key for newer skiwear entrants Aerie, Draper James and Aviator Nation.

“We like to show our brand fans that we can fit into all aspects of their life,” said Kathryn Sukey, head of design at Reese Witherspoon-founded Draper James. “And today, they’re seeking out joie de vivre moments with great intention.” The fashion brand launched a collaboration with ski apparel brand Fera via a “ski shop” on its own website in mid-November. In the last two months, “ski” has become a top search item on the site, said Sukey. She noted that Fera was a fit for the brand due to its feminine aesthetic and that both she and Witherspoon love to ski.

Similarly, Paige Mycoskie, founder and president of L.A.-based Aviator Nation, is a snowboarder. After launching the brand in 2006 based on the casual styles she wanted to wear, she introduced outerwear and skiwear three years ago. Now, it accounts for a “huge” portion of the revenue, and individual jackets are among top-selling items, she said. The brand is constantly rolling out new styles in the category. A color-block puffer and a striped ski suit are set to launch next week, followed by ski pants and tighter ski suits for women.

“Fashion hasn’t been a huge part of skiing,” she said. “Everything’s been really simple and looked the same: black, red or blue styles by a handful of brands in the higher-end market.” As such, she prioritized making Aviator Nation’s takes on skiwear colorful and comparatively affordable ($850 for a puffer versus $2,000 for a style by Moncler), not to mention locally made. “Our fabric is superior to what’s out there, and our styles are made in America, which is important to our shopper.”

Mycoskie said the price of the brand’s ski styles allows some customers to buy more than one outfit to wear on the slopes. That idea of building a ski wardrobe is catching on.

According to Sophie Hill, CEO and founder of social- and chat-based e-tailer Threads Styling, “More clients are looking to buy multiple ski looks rather than just one per season.” The company’s sales of Prada puffers are up 60% year-over-year, and its shoppers are showing increasing interest in new brands, including Khrisjoy and Shoreditch Ski Club, Hill said.

Semarjian said that, while Mada App customers are buying just one or two puffers per year, they’re loading up on other skiwear styles to “change up the look.”

“The puffer jacket is like the gateway drug into skiwear,” she said. “Winter wear hasn’t been updated in a while, and now fashion-forward skiwear is available. All of a sudden, people are shopping beyond the puffer, for ski suits, Moon Boots and more.”

Affordability is a new skiwear concept that’s extending to the mall. Through its activewear-focused offshoot brand Offline, Aerie introduced a 30-piece skiwear collection dubbed Chillside ahead of the holidays. Included ski pants and jackets are priced at $125.

“Skiwear is the trend of the moment,” said Andrea Jagaric, chief design officer of American Eagle Outfitters, Inc. brands Aerie, Offline and Unsubscribed. “And like everything we do, we’re having fun with it; we’re not taking it too seriously. Our styles are comfortable, warm and water-repellent, but the way we’ve approached color and print is not typical [for this category].” For example, one of the puffers features a bright floral print. And most of the styles pair well with the brand’s hero leggings.

Others that have recently entered the space include 3-year-old direct-from-manufacturer brand Italic. In February 2021, it launched a ski and snowboard accessories category that includes snow goggles and ski gloves.

Most brands, like Draper James, are opting out of going it alone, choosing instead to team with a reputable skiwear company to ensure a smooth transition into the category.

Among Zegna’s ski gear within its premiere Outdoor Capsule, launched mid-June, is a pair of skis co-branded with ski maker Zai and priced $5,000. Zai has also collaborated on skis with Moncler and Saint Laurent. And in October, Balmain launched a ski collaboration with 100-plus-year-old ski brand Rossignol. Along with jumpsuits and jackets, it includes ski poles and helmets. Jil Sander and Arc’teryx released a collaboration centered on winter sports, including skiing, in November. And Shanghai streetwear label CANOTWAIT_ launched a limited-edition skiwear collab with sportswear brand Salomon last month.

“With specialized categories like ski, you want to work with product engineers who bring an unparalleled level of expertise to the table,” Sukey said.

A common next step is meeting skiers where they are, so to speak, by setting up shop in Aspen. In the first half of 2021, Aspen’s retail sales were up 26% year-over-year and 5% above the same period in 2019, at $423 million, according to the city’s Consumption Tax Report.

In December alone, L.A.-based lifestyle brand Madhappy opened an Aspen pop-up shop to showcase its Madhappy Outdoors winter capsule. The collection includes the brand’s first snowboard and skis, as well as a selection of ski puffers and snow pants. And Prada launched a collection of Aspen-inspired skiwear with AspenX, a new brand by resort owner Aspen Ski Company. The pieces were sold at a local AspenX store.

The month prior, Prada opened a “Prada on Ice” shop-in-shop celebrating winter sports in a Vancouver-based Holt Renfrew. The featured styles included skis, snowshoes and ski goggles. And Aviator Nation opened an Aspen store in November, supplementing its store in Vail. “There are definitely people who ski and snowboard who don’t know our brand,” Mycoskie said.

Some brands are taking a less direct approach, betting that skiers also shop in department stores. From November 18 to Christmas, Ralph Lauren overhauled its Polo Shop in Bloomingdale’s 59th Street NYC flagship to be a branded “Ski Chalet.” Cortina, Italy was the inspiration and a ski-inspired fashion collection was the focus. Similarly, starting on November 8, Moncler ran a month-long, ski-themed pop-up in select Nordstrom stores.

Dedicated “ski shops” are also trending online. On November 17, activewear retailer Bandier launched its own “Ski Chalet,” spotlighting 74 skiwear pieces. The styles are organized by destination, including Aspen, Jackson Hole and Chamonix. And there are sections dedicated to brands including Halfdays, Fire + Ice by Bogner, Perfect Moment and Holden. Halfdays launched in November 2020 by Olympian Kiley McKinnon who “couldn’t find ski clothes that were both fashionable and technical,” according to the site.

And MatchesFashion has been promoting its own “ski edit” on Instagram since the start of holiday shopping season. The retailer linked to the landing page in a December 16 email. It had “the ultimate ski edit” as the subject line and featured styles by Fusalp, Bogner and Moncler, among others.

Along with pandemic-driven shifts in consumer behavior, some experts owe the ski frenzy to the 2022 Winter Olympics, set to kick off in Beijing in February. In its “Holiday Merch Report” for 2021, released in mid-November, Poshmark declared that “Olympic fever is hitting fashionable early.” Ski-perfect outerwear by North Face and Canada Goose, as well as puffer vests and ski pants, were among its 10 most-searched-for products. And, according to Poshmark, these each saw year-over-year sales growth of at least 30%. Sales of North Face jackets were up 52%.

Another potential contributor to the trend is the “House of Gucci” movie, released on Thanksgiving.

“The [featured] ski looks are incredibly important to the film and the story of [one-time head of Gucci] Maurizio Gucci,” said Rachel Koffsky, international senior specialist of handbags and accessories at auction house Christie’s. “Saint Moritz was a critical setting for the film, and many of the most iconic scenes take place on the ski slopes and at après-ski gatherings, [where the characters are wearing] iconic 1980s ski apparel.”

On that note, multiple sources for this story credited 2021’s Gucci x North Face collaboration for driving the skiwear buzz. But clearly, there’s much more to it.

“If nostalgia dressing and comfycore had a baby, it would be dressed in skiwear,” said Shakaila Forbes-Bell, consumer shopping psychologist at Afterpay. “Physiologically, the soft layers of skiwear support our growing desire to be comfort-centric. Psychologically, the retro styles evoke feelings of nostalgia which has been proven to provide mood-boosting qualities. And similarly, the bright neons, metallic fabrics and bold prints of skiwear outfits allow wearers to have fun and treat their outfits like a playground, while speaking to our ingrained desire to stand out from the crowd.”

And lest we forget the influence of influencers.

“You see a lot of sponsored influencer ski trips happening,”  said Semarjian. “[Ski apparel brand] Goldbergh just did one with some really big influencers, then all of a sudden, within four weeks, we had 350 searches on the app for the brand. We offer around 4,000 brands, so that’s a lot for just one. And you can always track [these spikes] back to the influencers our audience follows.”

“To survive in this industry, you’ve got to figure out how to be important all year-round and in all parts of the world,” Mycoskie said. “Outerwear and skiwear definitely help with that.”

How will Yeezy Gap Engineered by Balenciaga change luxury and high-street brand collaborations?

Inside the Prada Christmas ornament scandal that took over TikTok.

Searching for the next Barneys.

What’s next for fashion-tech?

Image via Offline by Aerie.