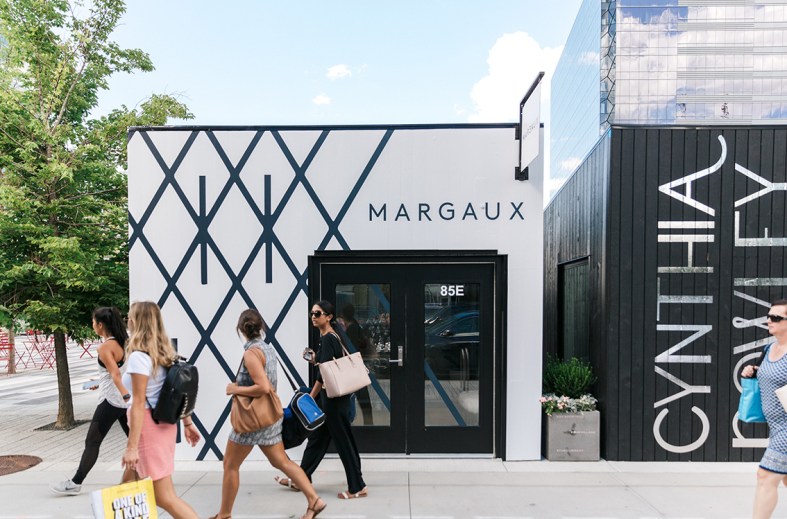 This story is part of The Great Mall Overhaul, a joint Modern Retail and Glossy editorial series looking into all the ways the businesses underpinning malls have been upended. Scroll down to use Glossy+ Comments, giving the Glossy+ community the opportunity to join discussions around industry topics.

Set in Westfield Century City in Los Angeles, the pop-up is meant to “show people a glimpse” of what the 5-month-old brand’s permanent stores will eventually look like. Opening multiple SKKN By Kim stores is a future step, Kardashian told Glossy.

With the retail landscape recently reiterating that it’s less than stable, plus relevance-chasing malls remaining in a state of flux, such pop-ups are catching on as shopping centers’ secret weapon. Of course, they also work to the advantage of brands that are sold on the value of physical retail yet gun-shy about making business commitments. “Nimble” and 10-year contracts don’t exactly mix well.

More recently, mall developers have been transparent about leveraging pop-ups to fill vacancies. When New Jersey-based mega-mall American Dream finally opened in 2019, its chief creative officer at the time, Ken Downing, said that 20 of the mall’s 100 first stores in operation would be “Dream Drops,” the company’s term for pop-up shops with leases starting at one month. In November 2021, the company opened the first Dream Drop in its luxury wing, The Avenue. Still open, the store features a selection of fashion and home decor curated by style icon Iris Apfel.

But according to mall owners, amid the return to physical retail, such Band-Aids are needed less often; retail space of any kind is getting harder to come by.

On its November 1 third-quarter earnings call, Simon Property Group head of investor relations Tom Ward noted the company’s “leasing momentum,” stating that it had signed more than 3,100 leases since the start of Q1, with average lease rates increasing 10% year-over-year. CEO David Simon said the average term across the company’s leases is now seven years. On November 10, while reporting third-quarter earnings, Brookfield Asset Management Inc. CEO Bruce Flatt pointed to a stat that retail sales are up 30% in shopping centers, compared to pre-Covid levels. Considering their “high-quality” positioning, Brookfield’s centers are poised to see an even greater boost, he said.

Still, developers seeing the value of pop-ups are keeping the concept in swing, despite the heavier lift of managing consecutive short-term leases.

To date, WS Development’s pop-ups have largely been driven by the need to activate vacant space, said Carina Donoso, the company’s head of retail experience and incubation. Pop-up-focused The Current has been the exception, though it’s about to become a bigger portion of the company’s pop-up play: WS Development now has fewer vacancies that need filling, particularly in its outdoor malls, plus it’s working to expand The Current concept to more properties within its portfolio. A second location will soon open in Palm Beach’s Royal Poinciana Plaza.

Melissa Gonzalez, principal at MG2 and founder of The Lionesque Group, which specializes in designing pop-ups, called pop-ups within malls a win-win: As with any pop-up, they allow brands to test a market or concept with lower risk, compared to opening a permanent store. Meanwhile, for leasing teams, along with biding time between leases, the activations provide an opportunity to “date” potential long-term tenants, she said.

“Particularly when it comes to digitally native brands entering physical retail for the first time, there are minimal metrics [up front] to determine whether the store’s going to be successful,” she said.

At the same time, shopping centers nationwide are attempting to pinpoint “the next experiential something” that will serve as the anchor driving people to their property, she said. Pop-ups provide valuable insight.

According to Gonzales, leasing teams and developers that have set up “turnkey pop-up infrastructures” featuring multiple brands, like WS Development with The Current, are doing brands a service. The space becomes a brand and a draw in itself, eliminating some of the risk around pop-ups and incongruent store adjacencies.

Described by Donoso as an “outside village,” the original Current is home to nine pop-up spaces of 180 or 300 square feet each. With tenants leasing the pop-up “houses” for 3-6 months at a time, the complex averages 27 tenants per year. It attracts national and local brands, including many digital native companies looking to learn more about their businesses and customers. Donoso said she stresses to such brands the importance of offering a disruptive in-store experience to mimic their “enhanced” digital presence.

The Current’s tenants that have done this well include Brave Daughters, which provided in-store welding services for its “permanent” jewelry. Another standout was hat company Project Paulie, which donates a portion of its proceeds to charities. Taking cues from an Italian bodega, its store featured Italian music, candles in the shape of baguettes and “pizza boxes” as hat boxes.

For brands, The Current’s take on “turnkey” retail includes hiring and training store associates, leveraging its experienced team of visual merchandisers for the store buildout and providing a robust marketing plan. In total, onboarding brands is an eight-week process. Executives from just 5% of the 100 brands that have popped up at the Current have actually visited the site, instead entrusting Donoso and her team of five to fully manage their presence, she said.

Brands typically spend $2,500-$8,500 on store signage, fixturing, and other bells and whistles, said Donoso. The bigger investment is in the marketing required to make the store successful.

“Every time a brand emails me to say, ‘I want to do your project,’ I say, ‘Are you ready to market the shit out of your business?’ Because you can’t just pop up and do well, especially if you’re testing a new market,” she said.

That marketing includes hosting a minimum of three events in-store for the duration of the pop-up. Recently, a Current retailer that was underperforming drove $4,500 in sales during its first on-site event.

While Donoso said she still Instagram-DMs exciting brands to introduce them to The Current, the property now largely “sells itself.” Since its opening, Boston Seaport has become home to large tech companies, as well as gyms, restaurants and the permanent stores of several DNVB brands. Plus, word of mouth is working wonders to attract The Current tenants.

For many brands, the pop-up concept serves as a valuable growth lever. And taking a more hands-on approach can have its perks.

In January 2022, beauty industry veteran Lynn Power launched the Conscious Beauty Collective, with a focus on bringing indie beauty and wellness brands together for co-funded and -operated pop-ups for 3-4 months at a time. Brookfield malls, in San Francisco and Boston, have hosted both iterations thus far.

“I had this idea and [interested] brands, and Brookfield had space, so it’s been a great fit,” Power said. “I don’t want to stay somewhere too long; we want to go and get awareness, new customers, new influencer [partners] and new media in every market — just go somewhere and make a splash. And Brookfield has over 300 malls in premium locations in the U.S.”

Conscious Beauty Collective’s San Francisco store, at Stonestown Galleria, was formerly an Aveda storefront. However, the latter and current store, at Boston’s Natick Mall, required more “beautifying” to match the featured products’ premium price points. Power said It was worth the extra effort, considering its location across from a Louis Vuitton store and a Nordstrom.

That multiple brands across beauty categories are featured in Conscious Beauty Collective stores encourages discovery, Power said. Meanwhile, the store facilitates education around clean beauty, which is “not yet mainstream.” In addition to serving customers in-store, associates distribute informative postcards and product samples to mall passersby. Also to promote the store, the Collective leverages geo-targeted Facebook and Google ads and direct mailers, all targeting people within a 15-mile radius of the mall.

Power called the pop-up a “survival tactic” for her own brand — a hair-care brand dubbed Masami — as well as the companies of her collaborator brand founders. “These are brands you can’t yet get at Sephora or Ulta or Credo, because we’re small,” she said. “But it’s the chicken or the egg: We want to be at these retailers to grow our brands, but they want our brands to grow them. [The hope is that] this will allow us to reach the ‘sweet spot’ size that retailers are looking for, while preparing us for the demands that a big retail partnership entails.”

She added, “Brookfield would love for us to stay [long-term], but they know the deal and they’re supportive.”

Like Brookfield, WS Development hopes its pop-up tenants will become long-term tenants. Donoso’s projects have a 15% conversion rate, she said.

Glossy 50 2022: The people who shaped fashion and beauty this year

The future of U.K. malls is ‘hyperphysical’