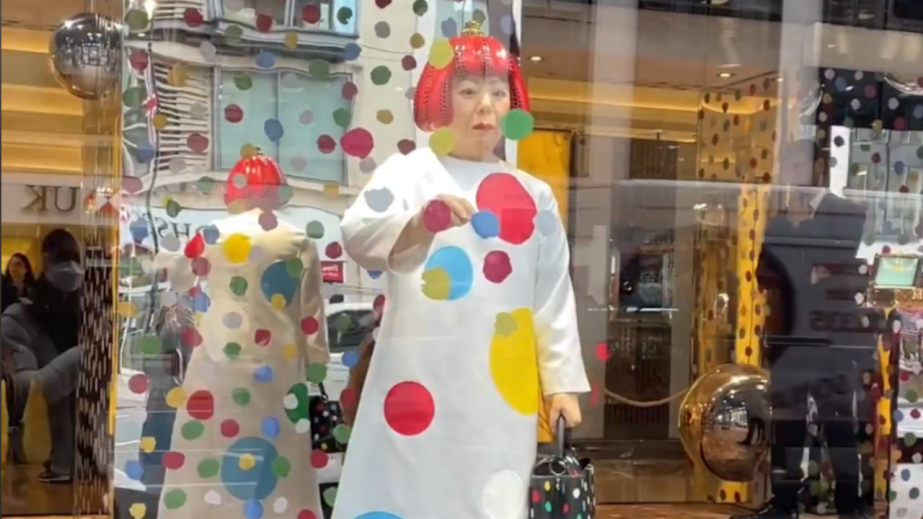 This week, a close look at Louis Vuitton’s new, captivating campaign. Scroll down to use Glossy+ Comments, giving the Glossy+ community the opportunity to join discussions around industry topics.

Louis Vuitton has released the sequel to its wildly popular, handbag-focused 2012 collaboration with Japanese artist Yayoi Kusama. But unless you’ve been living under a rock, you already know that.

Made up of more than 400 clothing pieces and accessories bedecked with Kusama’s signature polka dots, the collection has been met with great fanfare thanks to its expertly directed, star-studded campaign with cultural relevance on a global scale. The week after the Louis Vuitton x Yayoi Kusama launch in the states, on January 6, proved a fashion moment. At the same time, it provided a lesson in “blockbuster” brand marketing in 2023.

The campaign and collection

Louis Vuitton’s cruise 2023 fashion show in May served as a teaser of the collaboration, which first hit sales channels in China and Japan on January 1. Launches across markets have been accompanied by widespread 3D digital signage featuring supermodels, billboards of Kusama’s face, print media including front-page takeovers, polka-dot vans about town and high-tech physical activations inspired by Kusama’s Instagram-popular art installations.

As for the product collection, new and existing Louis Vuitton products have been adorned with Kusama’s famous dot and pumpkin motifs. Among them are a $365 bottle of fragrance and a surfboard selling for $13,000. The original Louis Vuitton x Yayoi Kusama collab was driven by Marc Jacobs, LV’s creative director at the time.

The role of the store

While social media has been the main driver of attention surrounding the Louis Vuitton x Yayoi Kusama campaign, the physical components are a large focus of the content.

In Tokyo and New York, the campaign “dominates the cityscape,” said Ian Schatzberg, co-founder of branding agency General Idea, who’s viewed it in both cities. “I’m more interested in the physical [components] than I am in looking at it on my phone,” he said, betting that he’s not alone. “After the pandemic, there’s fatigue of staring at the scroll.”

As such, he predicted that brands will increasingly shift their spending from digital advertising to the type of “retail theater” that’s been orchestrated by Louis Vuitton this month. Screens will facilitate immersive storytelling, and shoppers’ phones will serve to augment those experiences. General Idea’s clients include Prada and Swarovski.

With the campaign, Louis Vuitton has successfully tapped into pop culture, in more ways than one. Bringing 93-year-old Kusama’s art to life was intentional, but for many Instagrammers and TikTokers, various campaign components have also called to mind a TV show.

An episode in the third season of “Emily in Paris,” which debuted on Netflix in late December, is set in the innovative store of fictional fashion designer Pierre Cadeau. Much like the Kusama robot, a lifesize figure modeled after Cadeau greets shoppers from the middle of a front window.

London-based influencer Hana Martin captioned a TikTok featuring the Louis Vuitton x Yayoi Kusama display at Selfridges with “IRL Pierre Cadeau.” Copy over the video reads “Louis Vuitton hired Emily Cooper to do their marketing,” referencing the show’s main character. It has over 500,000 views. And that’s just one example.

But it must be noted that a lifesize Kusama was also featured in store windows to promote the original Louis Vuitton x Yayoi Kusama collaboration, in 2012.

Netflix did not respond to inquiries regarding the brains behind the (sometimes controversial) marketing moves showcased in “Emily in Paris.” A new study of Google search data by fashion retailer Boohoo shows that “Emily in Paris” placed second among shows influencing fashion shoppers in 2022, following HBO’s “Euphoria.”

The importance of focus

According to Schatzberg, Louis Vuitton’s “hyper focus” – on Kusama herself and polka dots — was crucial to making the collab campaign what he deems “a blockbuster moment.”

“In this landscape that’s inundated by choice, brands are doubling down on [an approach that communicates]: ‘This is the message and the moment that you need to care about,’” he said. “It’s a return to core branding values. [People are] awash in content, so it’s hard to cut through [the noise]. Brands need to be surgical, in terms of their message.”

At the same time, Louis Vuitton has managed to speak to a global, versus niche, audience.

“The internet has atomized [people’s focus] into a series of niches,” he said. “It’s very hard to create something that is a global story. But [Louis Vuitton] went all in, on all fronts: social, stores, advertising, experiences, pop-ups, … To drive global attention, they had to create a blockbuster. And that’s not dependent on a [large] investment; it’s about using less to do more.”

A part-two of the Louis Vuitton x Yayoi Kusama collection will reportedly drop on March 31.

H&M is promoting sustainability in the metaverse