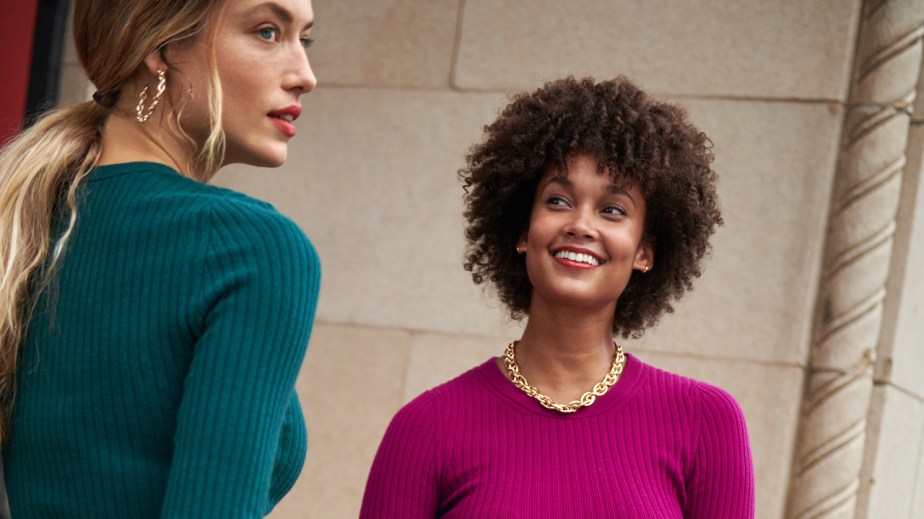 Fashion Briefing: How an OG mall brand plans to build a community

This week, a look at how Express aims to build a community and how a platform’s community is driving fashion.

Express is getting out of its own way.

After being known for 40 years as a mall brand specializing in workwear — ill-fitted to the times, to say the least — Express has been on a mission to change its reputation. Evolving according to modern consumer ideals is at the center of its ExpressWay Forward plan launched in January 2020. This week, it reported on the progress via its second-quarter earnings, revealing an 86% increase in year-over-year revenue to $458 million. It further broke down its goals and direction for investors on Thursday.

Empowering consumers to take the wheel was a theme that played out in both presentations. The mindset is certainly current: Engaging and winning shoppers isn’t about telling them what to wear, but, rather, it’s giving them what they say they want.

“There was a time when, for marketing, you would have your [single] editorial brand image, and you would push it out. That would be it,” said Sara Tervo, Express CMO, following the virtual investor event. Now, she said, the Express community informs the brand’s presence, from its posts on social platforms to the products on its sales floor.

Focus groups and TikTok are the new trend-forecasting service, it seems, and “so much” platform-customized content is the new campaign hero.

Tervo expanded on the company’s efforts to build and nurture its community, which center on five key strategies.

Trial-and-error social posts
A “micro-test-and-learn” process for sponsored social media posts is working to pinpoint what’s resonating with Express’ target audience. “We put out a lot of content targeted to small audiences, and we see what’s resonating [based on engagement],” she said. “Then we scale our paid investments across those different platforms accordingly.” Compared to the same timeframe in 2019, its paid social engagement was up 210% in the second quarter.

Most recently, Express has been focusing on short-form video platforms, specifically TikTok and Reels. A recent Facebook Live hosted by its associates saw more than 500,000 views.

In May, it hosted its first TikTok campaign, #ExpressReentry, which drove 49 million paid and organic social impressions and 4.4 billion media impressions. Last week, it launched a follow-up challenge on TikTok and Instagram, dubbed “30 Seconds to Confidence.” Among those posting their confidence rituals are paid influencers, including actresses Emma Roberts (17 million Instagram followers) and Liz Gillies (13 million Instagram followers).

“We’ve been learning that more content is better, and customized content for each platform is [necessary],” Tervo said. “They have their nuances, and they have their different influencers who they have different ways that they connect.”

The main way this is carried out is through what the company calls “customer co-creation.” It regularly meets with a set group of 100 highly engaged customers for virtual work sessions, where they weigh in on presented style inspirations, designs and color palettes. Two sessions are carried out, one for men and one for women. “They drive our collection,” she said.

The process has resulted in boosted sales. The company typically produces more inventory of the most popular styles, based on direct feedback, which has served it well. They consistently wind up bestsellers, Tervo said. Express also sends product samples to the customers for feedback, and once produced, they’re gifted the products. Select participants are then asked to be featured in the associated campaign.

User-generated content across platforms
Express has shifted its content strategy to make customers a greater focus, Tervo said: “We rebuilt how we’re organized, and we revamped our budget. Instead of doing costly editorial shoots that produced a couple of shots we were proud of, we now have different tiers of shoots, and we’re capturing content for all the different platforms.”

Some of the shoots are editorial and on location, and many are in-studio with macro-, micro- and nano-influencers.

“We’re also leveraging a lot of user-generated content and asking our customers to create content with us,” she said. “People want to be inspired, but they also want to be able to relate or see themselves.”

Insider access
Last month, Express launched the Community Commerce affiliate program in beta, set to roll out this fall. To build it, it’s currently recruiting “Style Editors” who are passionate about the brand to shill Express styles via personal storefronts and social accounts. The program has received media attention and an application can be found on Express.com. Editors will have exclusive access to new products and will be able to host in-store events for their friends and followers.

“It’s a nice differentiator from the more traditional DTC process,” said Tervo. “Plus, it will be a content [generator] and [give] us more opportunity to connect with customers and acquire new ones.”

So far, the program is exclusively being offered in Texas. Among participants are those “with influencer-level followings and DTC experts who know how to work a business,” Tervo said.

Personalized service
Finally, Express is further personalizing the customer service it provides, both in connecting with customers and keeping them coming back.

“We’re evolving the store experience, including how our associates engage with our customers,” said Tervo. “It will be more intimate and comfortable — a destination and a place where you want to spend time.”

Earlier this month, it hosted small events in 50 stores, offering one-on-one styling services to its loyalty members. The company plans to “expand on those ideas,” Tervo said.

In addition, it’s updated its website to offer more style and outfit recommendations, and it’s currently upgrading its AI functionality to personalize further the items being served up. It recently expanded its virtual styling program — it’s now being managed by its store associates, in addition to its photo studio stylists.

Styles going viral on TikTok, then selling out and inspiring knockoffs and related products are common. Case in point: Aerie’s criss-cross leggings.

But the platform is having a big impact on the secondary market, too. Executives from resale companies recently called out TikTok’s impact on their inventory and sales.

On the company’s second-quarter earnings call this month, Etsy CEO Josh Silverman said, “Things that are hot on TikTok show up on Etsy within moments and actually can drive millions of dollars of gross merchandise sales.”

And a Poshmark spokesperson told Glossy this week that TikTok heavily influences its Gen-Z shoppers. Among its current best-selling brands among Gen Z are Princess Polly (No. 2) and GymShark (No. 4), both of which Poshmark owed to the brands’ popularity on TikTok.

Meanwhile, matching sets are a top-five Gen-Z trend, with sales of the TikTok-favorite brand Girlfriend Collective seeing a 42% year-over-year boost in order volume. Also in the top five: stuffed animals. The category has seen a 226% year-over-year boost in sales, “largely driven by the TikTok-driven popularity of Squishmallows and by TikTok influencer Charli D’Amelio showing off her collection,” according to the Poshmark spokesperson.

Amid inventory issues, brands are refashioning unsold products into new ones.

Fashion e-commerce sites are getting the Netflix treatment.

Balmain and the U.K.’s Channel 4 have collaborated on a drama series.

The in-store experience is new and improved.

LaQuan Smith is raising the bar on NYFW Spring 2022.