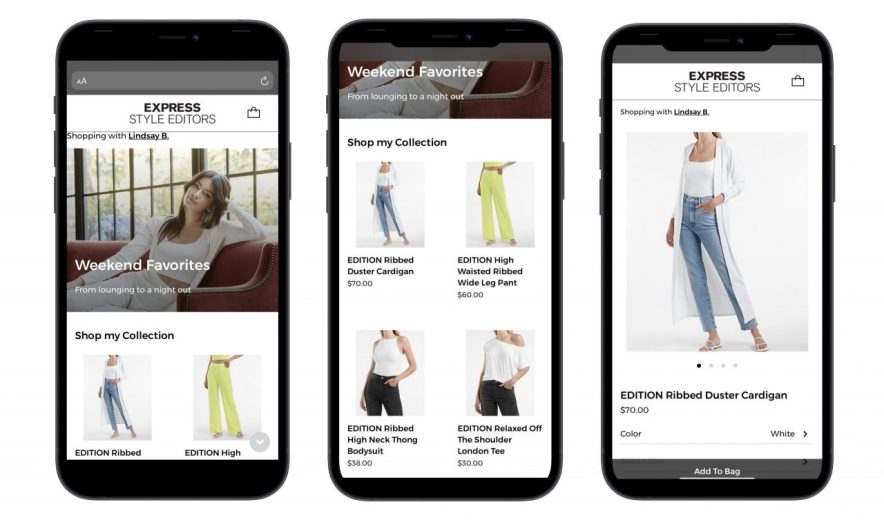 Express is attempting to take its influencer marketing to new heights with its new Express Community Commerce program, driven by “Style Editors,” a mix of influencers, micro-influencers and regular shoppers. The program, announced on Monday via a press release, allows anyone to be an influencer, should their application be accepted by Express. The application can be found on Express.com. The idea is for Editors to attract new customers to Express and drive sales. Some have worked with Express previously, while others have not. The company declined to provide the names of any Editors and the number of Editors it plans to accept.

Tim Baxter, Express CEO, said that when he joined the company in 2019, he wanted the company to inspire confidence and self-expression.

However, Community Commerce is being led by Brian Seewald, Express’ svp of e-commerce, who, with a team, led outreach to prospective Editors for this program.

“We thought about how we could capitalize on our community,” Baxter said. “The Express Style Editors will be a network of like-minded, entrepreneurial individuals. We’re going to coach them, train them, and provide mentorship and meet-ups. And essentially, they’ll have the ability to create their own storefronts, housed on a webpage, which they will promote and link to from their own social media accounts.” These perks will be enabled via an exclusive app that Style Editors will have access to. It will also help them build content around the Express products they are promoting. On the beauty side, Sephora has worked to incubate its own influencers via its #SephoraSquad program.

Those storefronts, Baxter said, will only be accessible via the Editors’ social media accounts, not from the Express site itself. There will even be exclusive products only available through the Editors, though they will also be able to pull from Express’ regular assortment. They will earn an undetermined commission on anything sold through their storefront, and there will be no limit on how much commission they can earn, Baxter said. In the past, brands like Glossier have created similar programs for individuals to serve as pseudo brand ambassadors and recruit new customers through a commission model. Retailers and brands alike have also leveraged their own employees to act as influencers in the past, an approach that resembles Express’ strategy and the idea that anyone can be an influencer-turned-salesperson.

As far as what Express is looking for in Style Editors, Baxter said they could be people with 1,000 followers or a million followers, as long as they “represent and reflect the brand well, have strong engagement with their followers, and both believe in and drive the brand mission to inspire self-expression.” Finally, he said, Express is looking for people who have “previously [demonstrated an] entrepreneurial spirit in their social media posts — people that really want to be able to use their platform to earn money.”

Baxter said Express will measure the program’s success based on the resulting revenue and profitability, as well as the customer acquisition and engagement gained.