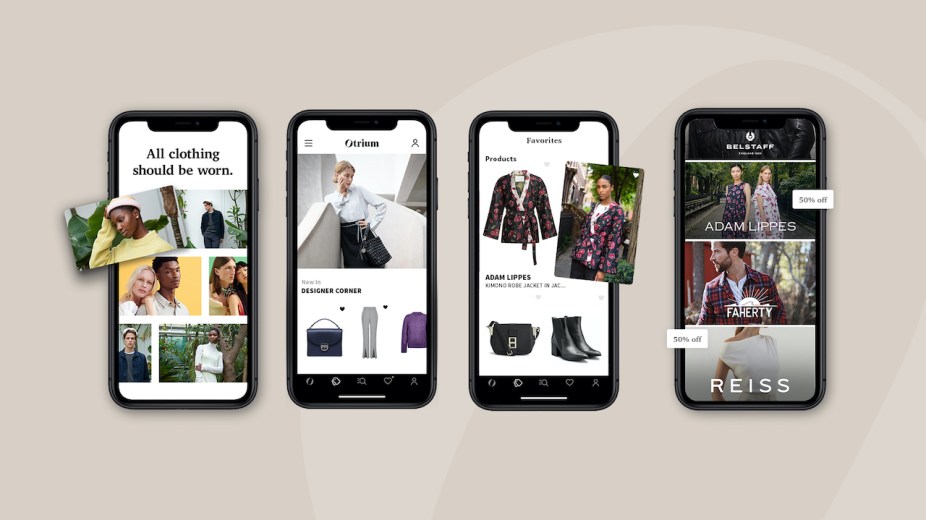 Fashion Briefing: ‘Discounts are what sells,’ even this holiday season

So much for this being the year that discount-focused holiday promotions come to a halt. Yes, inventory shortages are rampant and product sell-through is practically guaranteed. But, to compete for early shoppers amid a flurry of holiday sales, many brands are reverting to their regularly scheduled promotion programming. Others are even discounting for the first time.

This week, a number of brands and retailers launched or announced their Black Friday sales, which, other than arriving early, read as standard. For example, Nordstrom kicked off Black Friday on Thursday, with up to 40% off items by brands including Ganni, Good American and Everlane, among others. And Billy Reid announced tiered discounts of 20-40%, based on spend, for five days starting on November 24.

Fashion company executives I talked to this week shed light on brands’ strategies for getting in on the discounting game while also managing cash flow and customer satisfaction amid inventory shortages. Indeed, it’s a tough balance to strike.

Good planning
For eyewear brand Prive Revaux, holiday inventory is not a major concern, said Nevin Jethmalani, the company’s director of e-commerce. “We’ve done a really good job in planning our buys,” he said. As such, the company ran an early Black Friday promotion of 30% off sitewide from Wednesday through Friday of this week.

“If the brand has the inventory available, they will discount like every other brand in every other year,” Jethmalani said. “And many [brands] that are well-prepared are discounting even more than usual.”

There’s no getting around it, he said.

“The Walmarts, the Costcos and the Targets of the world are discounting like crazy, because they have economies of scale to buy in bulk. So small brands need to discount to compete. The only brands not discounting are those that are low on inventory and trying to maximize every dollar.”

The bulk of Prive Revaux’s sales come from its best-sellers, he said. Therefore, the bulk of its buys for holiday were for those products. That was a slight detour for the brand.

“Newness is something that our customers really like. So we typically launch new styles on a weekly or bi-weekly basis,” said Jethmalani. Prive Revaux also considers the seasonality of its styles, focusing on sunglasses in the summer and blue light glasses in cold-weather months. And recently, it’s been building up its prescription glasses business, which is a bigger money maker.

The company’s retail partners, including Kohl’s and America’s Best, are also well-prepared to run promotions around Black Friday and in December. They placed their orders 4-5 months ago. To get rid of older stock and discontinued styles, Prive Revaux also sells through TJ Maxx and Nordstrom Rack, among other outlets.

Overall this holiday, the company’s holiday sales goal is to beat 2020 numbers. For the year, it’s on pace to increase its revenue by at least 20%.

Reminding customers to shop early to ensure the timely delivery of gifts is just one way the company hopes to gain the attention of holiday shoppers and boost its bottom line.

“Shipping delays are just going to be a part of the shopping experience,” said Jethmalani. “But we’re being very clear about our last ship dates. And our warehouse is working with us to automatically upgrade boxes to two-day shipping to ensure Christmas delivery if needed.” The company is promising that ground orders placed by December 17 will arrive by December 24.

Prive Revaux’s holiday marketing mix includes an abundance of SMS and email messages, as well as UGC content that will be featured in organic social posts and on product pages. To maintain its current flow of UGC, the company’s secured 1,700 ambassadors, up from 10, in the last year. It’s also ramped up its affiliate marketing program, in a play for more media coverage. Finally, its celebrity co-founders, Hailee Steinfeld, Ashley Benson and Jamie Foxx, have 42 million followers between them. They work as “marketing levers,” said Keran Look Loy, CMO of Prive Revaux. As such, they’ll be supporting holiday promotions.

“It hurts your bottom line not to discount during Black Friday,” Jethmalani said. “If you’re trying to maximize revenue, discounts are what sells.”

Doing off-price right
Even brands that have never discounted before are going there this year. For some, it was the modernization of available off-price channels that worked to seal the deal. Now, they can cater to consumer demand for product steals, on the sly.

European online outlet mall Otrium launched in the U.S. on Wednesday, in a bid to answer fashion brands’ supposed excess inventory problem. Yes, that problem is so last year — but it’s likely next year, too. Ports will eventually clear out, leaving brands to contend with oodles of past seasons’ styles.

According to Zuhairah Washington, president of Otrium, the company works like training wheels for brands entering the off-price channel.

“For many brands, we’re their first and only excess inventory channel,” she said. “So through our platform, they’re testing and learning how aggressive they need to be with discounts.”

For those newly launching in an outlet channel, it’s likely a strategic move in more ways than one, said Nate Shenck, head of retail at Boston Consulting Group North America. “In an era of supply chain challenges, it’s prudent for brands to focus on the availability of their top-selling SKUs. They likely had to unload more excess from last year, when demand was suppressed, to make room.”

Brands currently selling on Otrium include Belstaff, Anine Bing and Reiss, among others.

Brands have so far been comfortable launching off-price through Otrium due to the privacy and control it offers them, said Washington. For one, the site is gated; shoppers need to enter their email address to access the experience. Plus, brands can opt-out of marketing which spotlights high discounts they’d rather not broadcast. Otrium also allows brands to dictate their products’ pricing and merchandising. And it uses a dynamic pricing algorithm that can recommend optimal pricing for products, based on demand.

In addition, Otrium gives brands access to a plethora of data. That includes product sell-through rates, geographic exposure and shopper demo, among other information. Washington said this data transparency is meant to aid brands in making smarter decisions around the products they produce.

Finally, Otrium holds its inventory in its own warehouses, allowing brands to dedicate their own warehouse space to fresh merchandise. Its competitive delivery times and free returns were essential to compete in the U.S. market, Washington said.

Otrium works on a revenue share basis, splitting sales with brands. As such, “there is opportunity for [brands] to earn direct-to-consumer margins,” said Washington. The company’s total revenue has grown by more than 100% per year since launch.

To fuel its U.S. expansion, the company completed a Series C funding round of $120 million earlier this year. Prior to its U.S. launch, it was selling 300 brands to 3 million members. They shopped an average of three times per year, typically buying multiple pieces during every transaction, and 80% percent of customers shopped through its app. The U.S. is its fastest-growing market and is set to become its largest.

According to Washington, Otrium’s investors “helped open doors,” in terms of linking with partner brands out of the gate. Its investors include BOND Capital, Index Ventures and Kering Group, among others.

Today, the trends of the times are working to its advantage. “In times of economic instability, people are looking to find the brands they love at a great price, and that’s what we offer,” Washington said. The rise of e-commerce shopping is also helping.

Regarding the current inventory strain, Washington said, “More brands are holding on to what they have right now, but we’re a long-term player in this [market].” Moving forward, Otrium aims to be brands’ preferred off-price partner, as well as “the most personalized end-of-season shopping experience.” Expanding to categories including beauty is also a goal.

“We like to think beyond seasons,” Washington said. “Our belief is that fashion is the world’s largest art form, so it really should be timeless.”

Designing covetable experiences for customers in gifting mode is a routine Neiman Marcus has long embraced. In 1959, it launched a Fantasy Gifts section in its iconic Christmas Book, which became an annual tradition. It’s since driven sales of a range of trips, events and adventures developed in collaboration with celebrities, artists and designers.

This holiday, seemingly in response to the times, more retailers are taking its lead. Not only is there pent-up consumer demand for getting out, but there’s also uncertainty around retailers’ ability to drive the usual Q4 revenue. After all, their typical assortment of products may be largely out of stock.

True to form, Neiman Marcus has debuted an array of experience-focused Fantasy Gifts for the season. They include a Roaring ‘20s party at NYC’s Apollo Theater organized by popular party planner Bronson Van Wyck. Asking price: $395,000. For $235,000, there’s also a mountain-top ski adventure in Jackson Hole, complete with lessons on the slopes by champion skier Lindsey Vonn.

For its part, Saks is offering a Rockefeller Center Tree Lighting experience, benefitting its initiatives around mental health. For $10,000, shoppers can get a two-night stay at a five-star hotel, as well as an evening at Saks’ flagship store and restaurants. They’ll be treated to dinner, drinks and a view of the iconic tree-lighting ceremony. There was also a package centered around a Saks campaign for kids: The retailer offered the chance for someone’s kids to take part in a photoshoot and be featured on a marketing mailer. It already sold out. Saks also sold experiences for holiday in 2020.

“When developing our gift guide this year, we knew our customers would be ready to celebrate and spend,” said Emily Essner, Saks’ chief marketing officer. The company focused on facilitating easy navigation of its Saks.com gift guide, and spotlighting inspirational content and products. As such, the featured gifts include everything “from fashion and beauty to luxe gifts and once-in-a-lifetime experiences,” she said.

For its part, Net-a-Porter is making the gifters’ process more experiential, in an “aim to not only engage customers, but also surprise and delight [its] community,” said Lea Cranfield, chief buying and merchandising director at Net-a-Porter.

For example, from November to December, 25 Net-a-Porter shoppers will win one of the items saved in their net-a-porter.com wishlist. What’s more, Net-a-Porter plans to host a quiz on its Instagram Stories, when four followers will win a Net-a-Porter style of their choice for up to  £1,300 (around $1,750). The company had planned to introduce a menu item of shoppable Dream Experiences on December 1, as Glossy reported. But it has since decided against it. The experiences included a pottery workshop with CompletedWorks and a home consultation with interior designer Kelly Wearstler.

Even struggling New Jersey mall American Dream has debuted an experience-based gift guide. The offerings include a $150 brunch with “SpongeBob and Friends” and an $899 Influencer For a Day Tour. The latter lets someone bop around the mall’s most Instagrammable spots with a professional photographer for two hours. Of course, any resulting social posts would also serve as marketing for the shopping center.

How brands are prompting their customers to shop early for holiday gifts.

Walmart is going even bigger on livestreaming.

Is 3D body scanning the answer to fashion customization at scale?

How Microsoft is forwarding upcycling in fashion.

U.S. retailers reliant on tourists are counting the days to November 8.